Beat them on the twisties?

We all know much fun our little 5’s are, particularly the handling. But we also accept, although spritely, they’re not the fastest thing on the road.

I’ve read a few times (and have experienced firsthand) how MX5’s sometimes compel boy racers to overtake us. As if to say ‘look at the extra power I’ve got under the hood’.

So I was just wondering if anyone has a Karma balancing story to share where a boy racer discovered just what an MX5 can do on the twisties;-)

i dont have anything like that cos i dont race / compete in that way. i have had peeps who want to from lights. i constantly get peeps breaking the speed limit to overtake me. yesterday, for 1st time ever, i was behind a H reg triumph something or other which was tiny compared to mk1. first time i’d ever felt like i was driving a large car.

This would need to be an anonymous confession, because thou shalt not admit to illegal street racing on a public forum.

And there are MX5 “boy racers” as well.

Like this gallery of wannabe crims. Not all plates are blurred 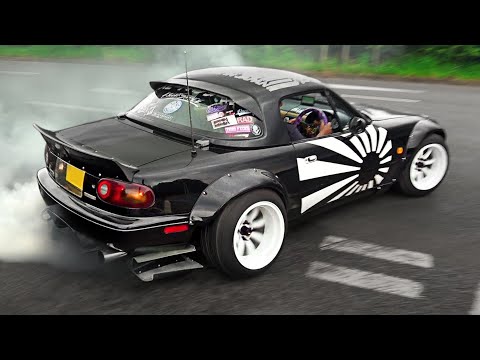 Note, this forum is the forum of the MX5 Owners Club, but all are welcome to participate. From the front page of the club website:

The Club’s aims are the same today as the day it was founded; to promote the use and enjoyment of the MX-5, encourage safe driving and create a friendly environment where MX-5 owners can meet and exchange knowledge, ideas and experiences.

I think confessors might want to think long and hard about that, as to whether an anecdote entirely fits with that ethos.

up against a TVR Griffith on track at Knockhill. He disappeared down the straights and was trying, as it was weaving under braking. On his back bumper by the start of the next straight.

The problem is that a TVR Griffith driver isn’t really a boy racer,

I could say I “had” a Ferrari 355 once at a track, but I also know the owner was nervously tiptoeing around.

With a bit of judicious editing, I can be made to look a total racing god (Days of Thunder) at the old Disney/Richard Petty track. The impression fell apart when I tried to get out of the car. Those old Winston Cup cars do pull a bit though

This is a note for the person wanting a roof rack for his 5, have a look at 6 minutes 20 seconds in. Couldn’t believe my eyes but there it is.

I drive up to the speed limits on public roads. In an mx5 that’s pretty fun and enjoyable. Thats the beauty of these cars.

If i want to go tad quicker i do it safely on a trackday.

I find the point is made when you’ve got a boy racer on a twisty twisty road where they’re behind you on the straights but have to slow more on the bends where you cruise through with minimal braking and squeeze the throttle a bit on the exit opening up a decent gap but still staying within the limit.
There’s a couple of medium-size roundabouts near me which I’ve got down to a very fine art

I may be ancient myself but I doubt if anybody under 60 has used the term 'boy racer ’ since about 1975 . It belongs in the same lexicon as 'breathed on ’ and 'burn up ’ surely ? Or even 'twisties ’ …

On topic , MX5s aren’t especially noted for leech like cornering , which is a large part of the appeal surely ?

I had my first MX5 in Milton Keynes, about 20 years ago and mastered the roundabouts at legal speeds. Sometimes, I visit and have fun with Tesla straight liners.

Having ridden and raced motorcycles years ago, the twisties of the road can be straightened out, even when still on your side of the road.
It’s surprising how many people following, disappear because they don’t read the road that is ahead of them.
It may just be me, but see what’s ahead, engine brake and feather brakes in.
Correct gear on exit and the smile never goes away😁.

TBF beating people in the twisties is mostly about driver skill, tyres, whether you know the road, and whether or not you are mental. And the same applies to the other guy. I’ve fond memories of chasing a dude on an R6 along some scottish b roads in my stinky mondeo, because I knew the roads and he didn’t know how to ride a bike

But IMO the MX5 isn’t some miraculous b road beast, most boy racer cars that can outpower us in a straight line, will be in the same class as us in the corners.Where we win is smiles.

But IMO the MX5 isn’t some miraculous b road beast, most boy racer cars that can outpower us in a straight line, will be in the same class as us in the corners.Where we win is smiles.

Really depends on the MX5 in question and the hot hatch also. Too many variables but most hot hatches beat an MX5 in a straight line but I know for sure many of them couldn’t touch a MX5 in the twisties, they would get dropped on a roundabout
Many are heavier, front wheel drive cars with no LSD.

Where the MX-5 wins is in tactile driving pleasure. Modern hot-hatches are brutally quick - powerful and agile. Unfortunately, they are also “wasted” in real world driving conditions of speed limits and congestion.

An MX5 will put a smile on your face more of the time while still enabling you to keep your license.

However, guess which car we will be taking to the Peak District, today? Hint: not the overweight electric blancmange.

I always go to The Peaks in mine.
There’s no better way to enjoy the twisties, scenery and the 2,000 acres of sky above you😁

Where the MX-5 wins is in tactile driving pleasure. Modern hot-hatches are brutally quick - powerful and agile. Unfortunately, they are also “wasted” in real world driving conditions of speed limits and congestion.

An MX5 will put a smile on your face more of the time while still enabling you to keep your license.

However, guess which car we will be taking to the Peak District, today? Hint: not the overweight electric blancmange.

Which begs the question; is there a hierarchy of MX5s in terms of “driving pleasure”. The MX5 line consists of basically 4 models, two of which are closely related and the other 2 which are not. Some have more driver aids than others. Even the original version, when released, was criticised for being too “refined” when compared to the cars that inspired its creation. Perhaps the definition of “tactile driving pleasure” has changed over the decades, and instead te term “relative tactile driving pleasure” ought to be used?

I might think my NA is this back to basics driving machine. In reality, I have wide 195 modern tyres, RPM-sensitive hydraulic assisted power steering, torque-sensing limited slip differential, assisted brakes, electronically-metered fuel injection, a throttle dampener, all of which combine to give a slightly synthetic driving experience if compared to something older.

My scirocco (itself a modern classic and virtually the last imported into the U.K. before production ceased) would be materially quicker than my mostly Unmodded (or de modded) mx5 na, twisties or straights. The mx5 is far more exhilarating.

I recently met a bloke with possibly the best mk3 triumph spitfire I’ve ever seen and he must have lavished hundreds if not thousands of hours on it and thousands of pounds and I suspect my mx5 will be materially quicker. On the same day I encountered a Lamborghini Aventador at what appeared to be full chat on a (fortunately) wide B road. I doubt anything this side of a WRC rally car would be quicker (nice if he could have kept it on his side of the road though) and I’d gladly find space for the spit and the aventador but I’d spend most time driving and tinkering with the mx5. I suspect the chap with the Spit feels the same way about his car. The guy with the Lambo probably doesn’t do tinkering.

Funny thing is I only ever bought the mx5 as a laugh - to see if I could run a £1000 wreck on a shoestring for a year as a bit of a personal challenge. It has ended up so much more.

I suspect a huge , wide monster with terrible visibility like a daft Lamborghini wouldn’t see which way a decent Elise, Atom or Seven went. That said , pace on B roads especially , is determined by the driver’s willingness to (a) look a d**ck and (b) to take risks. The two are often combined .

Cars like the Lambos the Ferraris and the Astons are very well suited to track and they are extremely fast cars. Some of them are pure GT cars, so luxury and comfort is evident when you eat up the miles going stupendously fast.

But they are not as good in the UK b roads. They are massive cars comparatively. This is why the smaller traditional British sports cars were developed and this is the backbone of the lotuses the MGs etc. This is why the mx5 is an awesome car to drive on these roads. You can have an awesome experience driving your mx5 on these roads and still be within the speed limits.

I don’t really think you can compare a small sport’s car with the big boys. They are meant to be driven in a completely different environment.

As a previous comment that the mx5 is fast on the twisties, its good and half decent yes i agree but on track no it ain’t fast by any stretch of imagination. Believe me i know, i have seen plenty things go around me in the straights and in the corners. Huge aero helps a lot, wider car with stupendous power and mahoosive tyres helps a lot

. And a caterham even with the same engine as an mx5 will be a lot lighter than any mx5 so you will get overtaken cuz of the better power to weight ratio.

However is it good fun? Most definitely yes

Well,my 93 Mk1 is the Triumph GT6 ( various degrees of built in awfulness) or BGT ( HND with Honours in terminal oxide S***Boxing)…that I could not afford when in vogue.
It’s simple, no frills, a tad crude ( well…very!) engaging, honest, entertaining, minimum instruments, shades of genuine optional extra “dangerous” given zero impact protection, and even has the decency to rot just like BMC…just for that added period authenticity. The option is not to drive it.
It’s cheap to run now it’s fixed, gets convos & nods going in car parks, goes like a stabbed rat through the glen twisties at 90mph…well OK 48mph. Shut up.

And above all, it’s a great drinking companion on single barrel 45% proof E5 even though it’s me who has to get the rounds in.
I could not care less what others do as long as they have their accidents elsewhere.