Beautiful Cornwall but under Covid restrictions

So we bit the bullet and went away to Mousehole for two weekends and the week in between. This had been booked before Covid as a family holiday and was meant to have allowed for a visit to the rally in Wales. As it was we managed it just before the second surge.

We used the Mazda3 because it could carry a week’s (previously delivered) food as well as our walking gear, and we were no longer taking the NC to the rally, and no longer eating out for main meals.

Mousehole is a brilliant little village/town, just don’t expect to take a big car or RV through it! We stayed in the “Old Watch House”, superb garden down to the sea wall and with private parking behind big gates just off the quay carpark. There were going to be six of us, but that didn’t happen, so we had the place to ourselves.
First day was a bit hazy, Penzance in the distance, Marazion off the right edge, our little white house is in the centre of the picture behind the carpark. 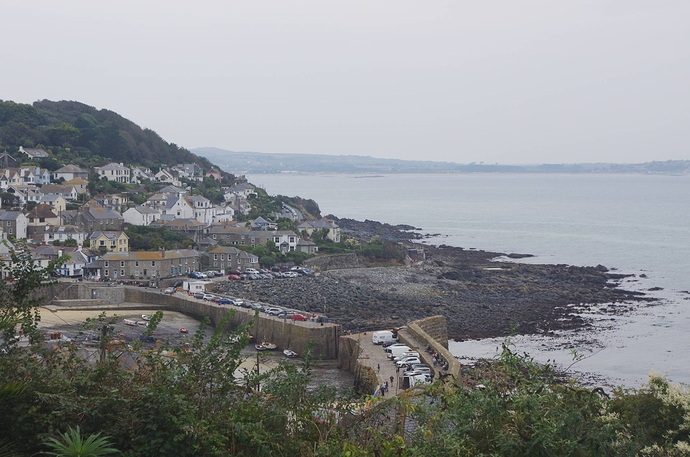 A close-up taken from the same spot, this shows the white house and its big garden, and people walking along the coast path below its sea wall, others sitting in the garden of the hotel behind the house. 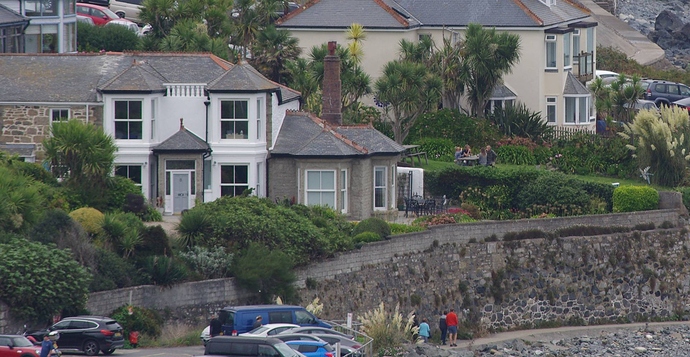 We went to Marazion to see St Michaels Mount, but were unable to book a slot to walk around, just as well because again it was quite hazy. 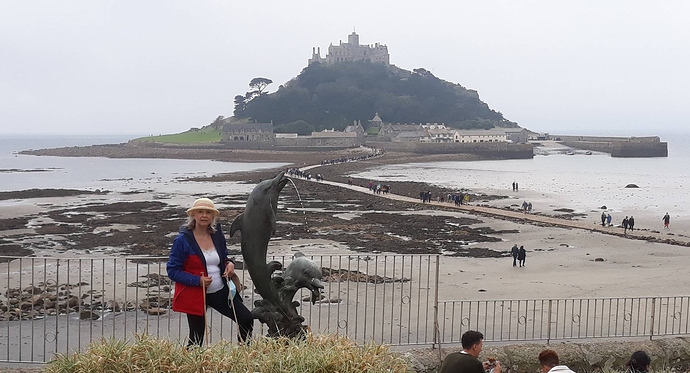 We were able to book a slot at Tregwainton Gardens, and the ferns are amazing, it has a vast selection of plants so is a definite day or two for any keen gardeners. The tea room near the carpark is well worth a visit too. 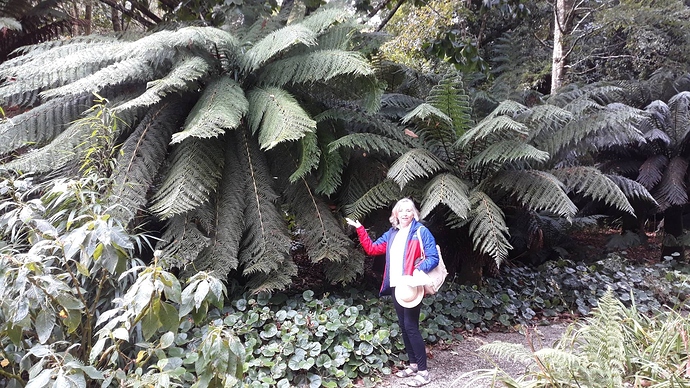 Finally we made the mistake of going for a short (2.5 miles) walk along the coast path from Mousehole to Lamorna. A clear day gave us a good view of St Michaels Mount, but the phone camera is not that good. 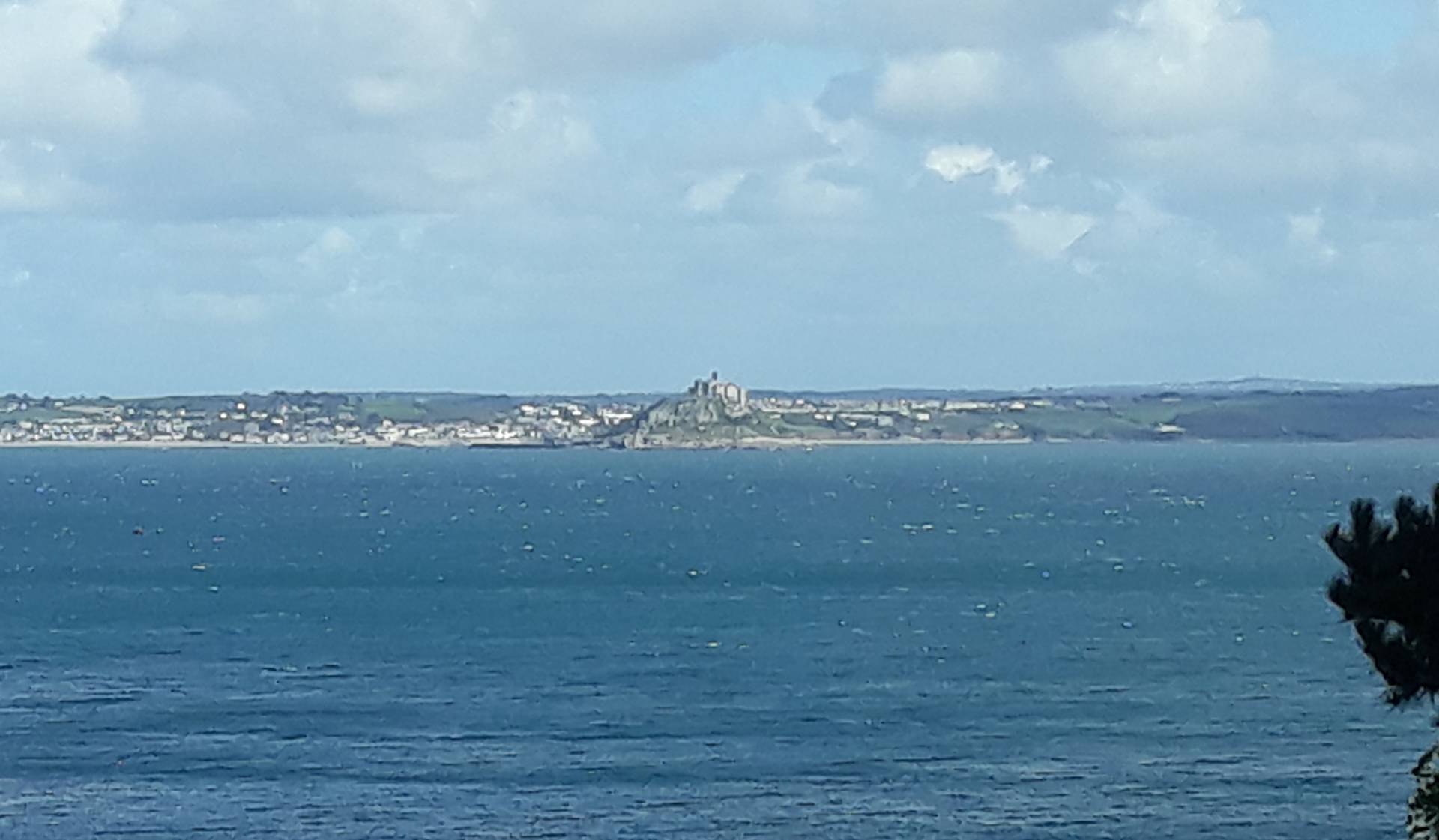 While Google maps suggest 55 minutes and a couple of walkers we spoke to the day before said “It’s OK, no big deal, less than two hours, fantastic views, well worth it.”
SWMBO said “That sounds good.”
it is a big deal, the guide books in the house were well out of date, and it took us 2.5 hours scrambling over big rocks and up and down slippery random steps and steep gradients often close to the cliff edge, and in some places less than a metre from the edge of overhanging unstable sandy cliffs that had recently crumbled and moved inland.
The final half mile to Lamorna might look grotty, but it is actually the easiest and most stable part. The path goes below the purple bit and through the middle of that rocky shoulder. 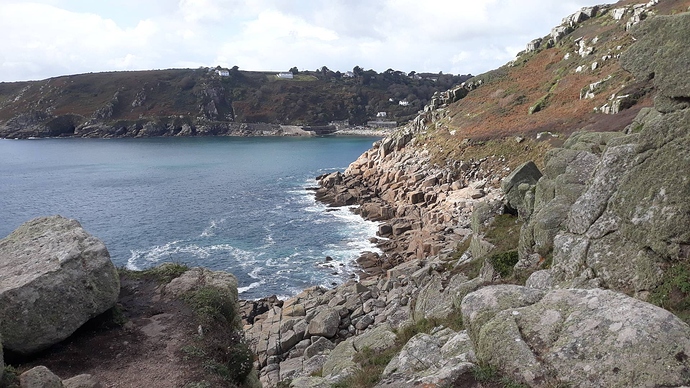 We were lucky to get a lift back when the sun turned to rain!

SWMBO does not plan to do that walk again.

The Mazda3 was relaxed and happy, doing 51mpg for a total of 640 miles with cunning detours around expected roadwork blockages pre-planned into the helpful Garmin. The Mazda satnav was useless as usual.

My old stomping grounds.
The family home was in Mousehole.

Lovely part of the world, a good trek but worth it. Never done it in any MX-5 so must try that sometime. We stayed at Porthleven and then on a farm near Bodmin.

Porthleven is lovely.
Except in a South easterly gale…

we were in st ives last year , did st michaels mount and the walk back , fantastic

we have friends who went saturday ( for the week ) , but are returning today due to all restrictions and weather

Nice photos ,and a lovely part of the world, my wife and I have been going there every other year since 1981, we often end up on the Roseland Peninsula/ St Mawes, or around the Porthtowan/ St Agnes area , originally camping but as we’re getting on a bit ,its usually a static Caravan or B&B.
Like everywhere its getting busier so its usually an off season trip, still busy, but not the chaos that you get when the kids are off on their Summer Hols, the Virus had thrown a spanner in the works at the moment, but we’ll be back, and we always discover new places each time we go, and also remember where we get the nicest Pasties!

The first time we visited Cornwall was in early 1970s when we stayed with NT Holidays at Predannack Manor Hotel (I think the imposing stone building itself has vanished now, I can’t find it on Google maps). Small daughter loved it because it was also a working farm and the animals were friendly.

Subsequent Cornish visits tended to be further North and based around Crackington Haven, always staying in NT Holiday accommodation, either B&B or self catering.

Then the family expanded and I needed to enlarge our house and holidays etc stopped for a few years. It was only after the first daughter had left home were we able to think of going away again, but these tended to be to swimming competitions around the country…