We won’t disagree about the bolts being corroded and very tight, I’ve often needed get my gas gun out to get the b@ggers out.

Like you a spray with penetrating oil the day before is a good start.

I like Kano Kroil, it’ b@gger off expensive but the best I’ve ever used. 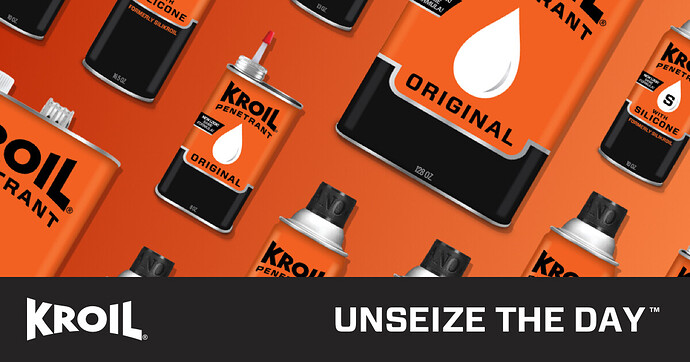 Trust the best penetrating oil on the market! Choose from Kroil Original Penetrant (AeroKroil) or Kroil Penetrant with Silicone (SiliKroil).

The nuts don’t so much round, unless you are using rubbish tools, but the studs snap. Not so much on the engine side of the cat.

If you have the car on the ground, use the weight of the car do the work for you.

Hi,
I had a UK NA in the early 90s and had BBR remove the cat. (All quite legal then.)
To be honest I didn’t think it made much difference to the performance, but it made the car sound just like my friends Alfa Sud.

Sorry just remembered more info, if you don’t already know.
Log book needs to say Eunos NOT MX5, as could be a problem. Book MOT as Mazda Eunos only, then legally the JDM import model is not on the MOT computer, hence none cat test.

UK computerized emissions testing requires VIN to be entered, at which point, entering the Roadster VIN will cause it to be not recognised.

If they are testing a Eunos Roadster as a MX5, and then telling you its failed, I can only assume they are trying to spoof the system uing a VIN they know works.

Its irrelevant whats on the logbook/v5. Some testers will insist, until blue in the face that its a MX5… Which funnily enough is the opposite when you try and buy parts from Mazda.

And decatting makes no difference. The MX5 used a high flow rate cat when it came out. As pointed out, combined with a standard exhaust, decatting results in an Italianite rasp. Decatting when you already have a loud exhaust leads to a random outcome.

Plus its just not PC. We no longer throw rubbish in the streets, let dogs do their bits on the pavement. Most of us will happily sort our refuse for recycling, composting etc. But its ok to remove a Cat, something that was fitted to help improve environment. And its no longer a case that a cat, for an old MX5, is really expensive to replace compared to fitting a test pipe; the costs are similar.

My car failed the cat test the year after the garage fitted a new cat & exhaust ( which rattled like crazy ) and yes MOT tester argued it was an MX5, I no longer use that tester. So I read up on here, obviously got wrong info re log book though. I fitted the decat & Moss exhaust, and no more issues with MOTs. It’s a 30 year old car, I do low mileage, but I do pick up my dogs mess & sort recycling & put my litter in bins. What is not PC is Garages / dealers replacing parts unnecessarily, in the guise of emissions or supposedly worn out parts.

Seems a load of potential grief to me… I’d be leaving the cat on unless it fails MOT and then I’d replace the cat because I don’t like the smell and don’t want to breath in the Carbon Monoxide either … it kills!

If I wanted more power via mods to the exhaust I’d fit a balanced length 4 branch exhaust manifold either 4 into 2 into1 for road or a 4 into 1 for the track and also fit a high flow sports cat and retune the complete engine on a rollong road or dyno.

Basic 4 stroke theory dictates that to achieve more power you need a Bigger Bang! i.e a bigger, longer fuel burn during the combustion period. More in More out!

More fuel/air in the combustion chamber at the time of ignition can be aided by the exhaust during the cam overlap period i.e. to benefit from the pull/ scavaging effect of the exhaust but unless fuel/air is made available at the inlet it can’t get any more in; hence my earlier message regarding if you change the exhaust specification stick it on a rolling road and retune to make any gains possible.

Only those that have before and after rolling road data know what the true benefit (if any) of removing the cat is… Save a louder trump.

Should removing the cat improve the scavaging effect more fuel/air will be scavaged and wasted in the exhaust system and the impact of the resulting mixture at time of combustion is an unknown factor but it’s not my engine! …

Sure, the above is not specific to MK1 MX5’s but hey, it’s just a 4 stroke engine, basically like all others.

Performance gains from removal i doubt very much, however long enough around modified and race kit to know from experience if you have any restriction in any exhaust after the headers its causing heat and flow issues, so would make more noise and 93 NA 1.6’s they’re worth iro 60 notes according to my guy and he deals directly with the guys in the UK who are the biggest and best buyers… will