Where did you find that? Unless you’ve added forced induction, all MX-5s only need 95 RON.

Where did you find that? Unless you’ve added forced induction, all MX-5s only need 95 RON.

Is it a US model? Super over there is similar to normal unleaded here. They have a regular grade which you wouldn’t put in an MX-5.

no it is a UK car!
definatly not an import!

I think that’s French or something, doesn’t it say Super sans plomb or something? On the continent Super is our normal fuel isn’t it?

That sticker actually says a lot of things, un leaded premium,bleifrei super,super sans plomb, min 95 octane / Ron.
Things have changed and now premium unleaded is 95Ron super unleaded is 97/98 Ron then there are the “Premium” 99 Ron fuels like Shell and Esso. As long as the fuel is min 95 Ron then in the UK at least it is suitable, anything else is your choice. 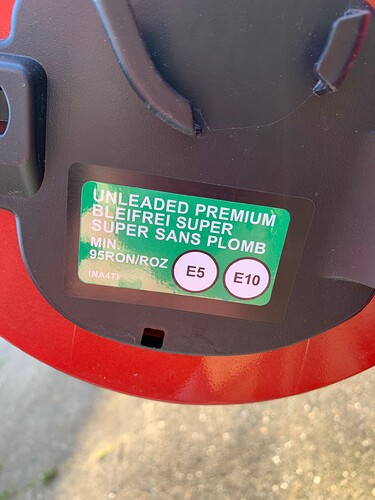 Three languages on this one, top is English, Premium Unleaded. 95 RON.

Edit… what he said.

Many thanks for clearing this up with a picture. It just shows how the ‘truth’ can be misinterpreted.

my fuel flap sticker is different to that one!
next time i fill up i will try to remember to take a pic!

Does it look like this as the previous shot was from a more recent car maybe an ND as it references E10 which was introduced into Europe around 2010 so earlier cars way not have any reference to either this or even e5. 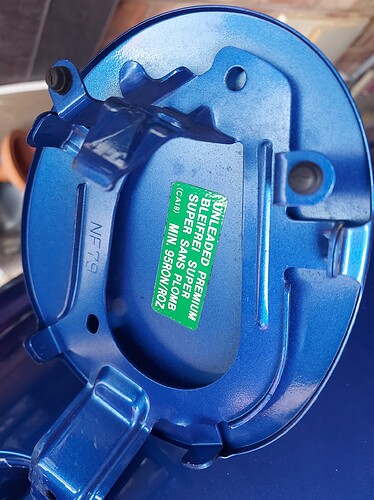 Yes, my photo was from a ‘71 plate CX-30 as an example but the sticker text I thought was “standard”.

thats the same sticker thats on mine!
tho its in better conditon.

it does show that i am wrong!
tho in my defence i will point out that i am dislexic and so the first time i went to fill up i opened the flap saw a green sticker (unleaded) and the word super!
and so i went with super unleaded!

and im going to stay with premium super unleaded as my baby only gets the best!

Still worth it though. Most MX5 drivers aren’t doing high mileage so the actual extra cost is minimal.

I agree with you Allan, but sometimes I think garages are taking the wotsit! The idea of £0.05p/litre being taken off last week was a joke and did not happen. I bit the bullet this time and put in the £1.63/litre E10, although by the time I have to put any more petrol in, another month will have passed, and in current times, a month is a long time in which a great deal can happen.

Just put some super unleaded in my daily driver, E5 97 Ron (Sainsbury’s) @£1.639. They had all the diesel pumps locked, maybe run out??
Opposite the BP garage had E10 @£1.589 which seems cheap for them as they are usually way way more expensive than Sainsbury’s but now on a par with E10.
Derby btw.

20% of UK diesel is sourced from Russia, so there is probably a reduction in supply occurring. UK is aiming to eliminate Russian diesel by the end of the year. Obviously not a trivial aim to achieve without some pain along the way. 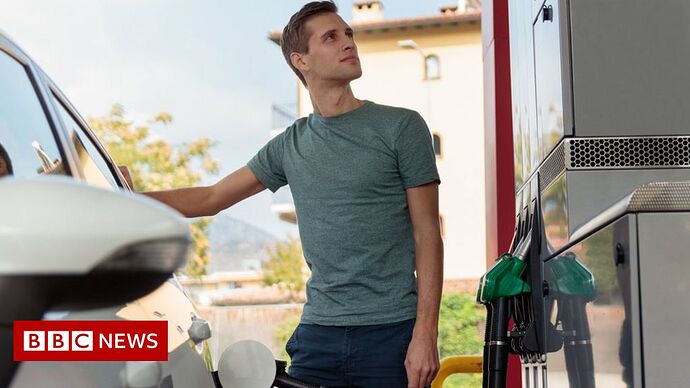 Russia supplies nearly a fifth of UK diesel - the UK says it will stop imports by the end of the year.

Note, looks like a significant portion of European diesel stocks will be diverted to Ukraine in the coming months. There has been an appeal for stocks, to fuel tractors gathering the harvest and T-90s. Something like 25% of wheat is from Ukraine, and if anyone didn’t notice, virtually all our Sunflower oil is Ukrainian or Russian (hence design of the Ukrainian flag). Its not a request we can therefore ignore, and its not going to improve supply at the pump.