just came across this article, shocked to see it - A jogger was filmed on dash-cam footage during his run. He is seen repeatedly kicking a grey Mazda car by Tregantle Beach in Torpoint, Cornwall that was parked on a lane at the roadside 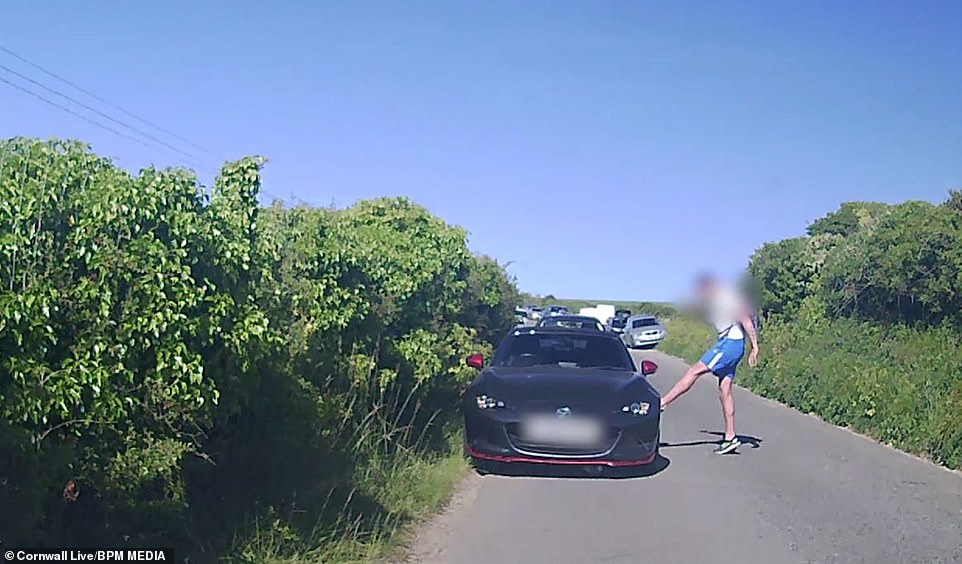 video can be seen here in the Mail article

Tempers boil over at beauty spots ahead of bank holiday weekend

Tempers boiled over at beauty spots across Britain today as locals clashed with tourists they say are blighting parks and beaches since lockdown restrictions were eased ahead of the bank holiday.

Strange that he’s pictured kicking the passenger side of an MX-5 but the subsequent picture shows the damage on the drivers side of a 4 door.

He kicked more than one car…let’s hope he is identified and prosecuted for criminal damage.

I can understand peoples paranoia regarding the virus etc, but on the other hand , I wonder how long it will be until the " F*ck off home, your not wanted here "
turns into " Hi, come visit our lovely region , tourists welcome " … we want your money.
There’s no excuse for outright scumbag vandalism, I hope they catch the so and so

Had a young sh*t bag on a bike (was going to term cyclist) kick my door in just because he got jammed between the kerb and my car trying to get by. I moved off and he kicked the door. I stopped and got out but he’d scarpered and off down a side street so quickly, I lost him.

Yep I’m in a dilemma, do I take my good lady for a walk next week up the Peak District, somewhere remote avoiding hotspots or just stick to the local walk?
I might not be welcome after I’ve read about the tourist traps being overrun and streets being used as toilets etc
Some by opening (businesses) are welcoming you whilst residents and remote farm/land owners are not wanting you in the countryside because of the worry to livestock and inconsiderate parking and mess folk leave.

This seems to be a growing problem, suffering traders want to get back on their feet , and welcome visitors back, which is understandable, but you then get locals upset at the , I assume , above average crowds turning up, and justdont want them there, … but no excuse to vandalise someones pride and joy

There are a lot of ingredients in the the cake of this incident. The jogger who inflicted wanton damage on that car probably will be identified and punished for criminal damage as well he deserves. There is no excuse for such criminal acts, but there may be reasons why he was brought to the edge of what, for all we know, was bizarre & out of character behaviours.
Reasons are not an excuse, there are none for what he did.
We do not even know if he travelled to be there, or was he local.
Think on it it this way. How often to we see people with a keep-fit focused mind set of putting their bodies into stress for their own health regimes being regular Court fodder for petty and not so petty crimes? Not a lot if at all. I attend ( or did) a gym 3 times weekly for personal health reasons for 6 years and not once have I come across a dodgy sort.

Now the flip coin.
My sister retired to Sandbanks 20 years or so back. She & her husband take regular walking exercises, some times driving a short distance to Chesil Beach, Bridport etc to do so.
The pair of them went out for the usual hour or so locally to them and decided to cut their ramble short last week thanks to the pungent stench of human urine & faeces loosely wrapped in bog roll thanks, clearly, to normal public facilities being either closed or not immediately available. The local areas were mobbed with people often times in multiple groups. The only ones not really causing issues, but clogging up back roads were motorhome owners with chem toilets.
There were rivulets of human urine running out of some back-shop bin areas, which of course dries off in the sun and creates a pungent ammonia -likened stench all of it’s own.
A lot of the locals, who know they rely on tourists etc, were seething but the Police were outnumbered and unable to do anything effective…without risking the shouty snowflake entitled brigades…with Iphones.

Now, some people are simply better equipped to deal with stress, and some have shorter fuses. What brought that guy to become, perhaps for the first time in his life, a criminal who may end up with a record that could damage him and his family for years, we will not likely find out. Had it been my car, it would not have been there in the first place, and it would at least have been parked properly and not facing oncoming vehicles while pretty much jammed up against the greenery. They made their choice that day to “join the sheeple”.
They certainly did not deserve to come back to the car in that condition, and the jogger deserves all he gets but…these days mixing it with Joe Public who have been kettled up and stressed to and over their normal limits is pretty risky. It’s quite conceivable that 5 owner had to avail himself of the country side as well. Who knows?

As ever, we can trust the Daily Heil for it’s excellent even handed reporting. ( Cough)

I can certainly understand the urge to get out and about but only stupid, inconsiderate people that insist on visiting areas that are SHUT DOWN which means there will be no facilities available, that means THE CAR PARKS ARE CLOSED and there are NO PUBLIC TOILETS OPEN!!!

That’s why I’m waiting for my son ( Staff Instructor at Police Scotland) to give me the word on social OK-ness for a planned 3 car convoy into the Glens. I trust him 100% in professional judgement & advice.
I’ve already checked I’ve got fuel/ toilet / snack stops ( not that I’ll need snacks) available as you probably picked up on before. My logistics have never in 40 years been an issue, but right now “optics” are.
Not really bothered about what our appointed Nippy, Queen of Scots says. It’s the Police, NHS & Heath gurus who tell her what to say anyhow and my son is amongst the first to be told for operational concerns. We will all be well apart while “together” and observe common sense hygiene practises as well. In short…we are grown-ups!

What I want to know is why his face is pixelated?
Surely he is proud of his actions, or more likely thought he could get away with it unnoticed!

He didn’t have anything to do with the filming as far as I know. The footage came from the dash-cam on another parked car. So maybe the pixillating has been done by the camera owner for legal reasons.

That’s new . He’s well exposed all over the www.

A jogger has been caught on camera kicking out at cars close to a busy beach in Cornwall. It comes as eased coronavirus restrictions and sunny weather have seen people flock to the county's beauty spots after weeks of a strict lockdown.

Guessing it’s for so called “legal reasons”, whatever that means!

Disgusting behaviour, no matter what the provocation (if there was any).

I’m guessing that the “legal reasons” are the same as those that sometimes pixilate the number plates of cars involved in “incidents”, interfering with possible prosecution?

Aye, it’ll be because any subsequent prosecution needs to be reasonably confident that anyone judging the case does so on the evidence presented in court, not what they may have seen previously in the press.

The car driver should also be prosecuted for illegal parking. he clearly does not understand the local parking restrictions on that road. and chooses to ignore the highway code and road signs which indicate that it is a clearway from April 1st through to September.
So parking in a Clearway Facing the Wrong Way when parked Versus the Villiage Idiot !!!
Under normal circumstances if your car has half a tyre on the road there you get a parking ticket
Its a double decker bus route along there.
He is also lazy as there is a huge car park 200 yards away.
If the Mx owner and others had parked within the law the cars would not have had a Kicking !!
Having said that the Village Idiot needs putting in the stocks.
And the car owners need re training on the highway code.
I would fine the lot of them !!!

The MX5 owner obviously parked in the wrong place etc, and well may deserve a ticket , but not to have his doors kicked in, the jogger was lucky he wasn’t caught red handed by an extremely upset and possibly very violent owner

The car owner be advised to keep himself under control in that sort of situation because if he did take the law into his own hands he’d be guilty of a more serious offence, our legal system considers assault on a person as a much more serious offence than damaging property and it carries harsher penalties

I agree, but I was a Motorcycle Dispatch rider for a while in London years ago, and saw many an altercation on the roads, a disagreement was one thing but when someone started smashing up or damaging the other persons vehicle, it all hit the fan, and the in’s and out’s of the law went out of the window, I’m not condoning this, but some people are very passionate about their cars/motorcycles, and as upset as the jogger may have been, he was 100% out of order resorting to vigilante criminal damage.

Yes, I know what you mean! Having served three terms of jury service in my time I’ve seen some of the more serious examples of those altercations as Crown Court cases.