I manufacture and sell reversing camera kits for the Mk4 ND MX-5s. I don’t sell anything suitable for your car but can offer the following advice.

While the dome type cameras are perfectly suitable for the ND they don’t work well on the Fiat 124 which has a similar boot mount with a similar lip to the NC. The camera isn’t adjustable so the lip on the boot gets in the way. That’s why it has been previously suggested to use the 3D printed mount. A simpler solution is to use the type of camera which is cube shaped with an adjustable bracket. These are widely available on eBay and elsewhere. I supply these cameras to customers who wish to fit my kits to a 124.

Most aftermarket cameras are NTSC standard although PAL standard cameras are also available. If a listing doesn’t state which it is then it will likely be NTSC. NTSC cameras are the only ones which work correctly with the ND and 124 but make sure you have checked which you need for your Panasonic head unit.

I’ve managed to get a very good camera, but it’s a bit big to mount under the boot lid where I planned.

I’m now considering mounting it on the black plastic part of the bumper.

I wonder if anyone has any observations on how practical this would be?

Hiya, did exactly what you suggest on my previous NC1. The only issue I had was the lens got very dirty, very quickly. I moved the camera to where others suggest, using the black blanking plate for a mounting point. Camera lens still got dirty but nowhere near as bad as when mounted at the bottom of the bumper

Thanks for your experience. That’s what I feared. Looks like I’ll need to see if I can improvise a way to mount the camera on the boot lid or return it and get a smaller one.

I too am planning on fitting a reversing camera to my NC and like most people I think the blank plastic panel between the number plate lights looks like the ideal place.

My head unit is a Pioneer and so I got the Pioneer camera to go with it and that has an adjustable mounting bracket.

My only concern is how to then run the cable down into the boot. The obvious route is down the existing tube for the number plate wiring harness but I’m not sure how easy it is to disconnect that. Has anyone managed to do that successfully?

Hi SM, the NC and ND are very similar in their construction and configuration underneath the outer body panels and trim. An example that you can easily see is that the jack mounting inside the rear right boot area is identical. So it may be useful to read the instructions within this post here MX-5 Mk4 ND Reversing Camera Kits For Sale £64.98 inc P&P paying particular attention to getting the wire from the front to the rear.
Also worth a watch is an instruction video which can be found in a link within this https://www.mx5parts.co.uk/reversing-camera-mk4-p-4242.html
A quick compare may help, obviously the trim and it’s removal will be different but when you get behind it, my guess is that things will be very similar. Nothing to lose by checking it out.
Have fun and stay safe.

That’s really helpful thanks, I’ll check those out.

Here’s the direct link to my ND reversing camera fitting instructions. How useful they will be for the NC I can’t say.

Hi Roadie, my suspicion is that the actual frame around the rear bulkhead will be the same on both cars so the routing of the wires may well be the same as well.

I doubt whether there will be any common parts but Mazda design style might have come up with a similar layout again. A bit like arty people recognising a painter by the brush strokes.

The internal panels around the area where the jack mounts and the jack mounts appeared to be identical. My suspicion is that the basic structure is the same on both models and that some of the substructure uses the same pressings. Obviously I could be completely wrong, not for the first time I might add.
If there are any body shops that have had to get in and close to both models please let us all know what if any similarities there are.

I think in principle both models are similar even if the panels differ in shape etc. I’m not too worried about running the cables from the head unit to the boot, that seems pretty straightforward. However, ideally I’d like to mount the camera between the two number plate lights which on the NC are mounted on the actual boot lid itself. (I believe on the ND the number plate and lights are integrated into the bumper but I may be wrong!).

Therefore, I need to find a way of getting the cable from the boot lid into the boot itself and the obvious place seems to be via the number plate light wiring harness. The attached image illustrates this in item 3. Unfortunately, it’s not obvious how the harness detaches at each end which I’d need to do to feed the cable through. 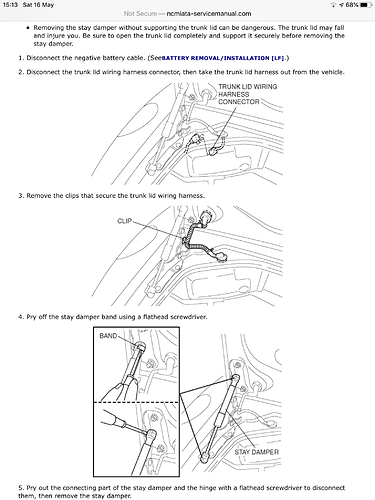 I see your problem now, thank you.
Is there the possibility of using the other side with existing mirrored holes or drilling new ones and using grommets?

Getting another cable through the existing rubber pipe is going to prove very difficult. Are there similar blanked off holes on the other side? The ND has blanked holes both sides of the boot and the panel that it closes to. No cabling at all to the ND boot. If so, a couple of grommets should do it.

There is only one blanked hole on the right hand side - on the boot lid. Also, the shape of the panel on the main body is slightly different on that side, i.e. it doesn’t have a corresponding flat section where the grommet on the left hand side sits, which would make it difficult to get a good seal. In any case I’m loathe to start drilling holes in my beautiful MX-5!

Therefore, I need to find a way of getting the cable from the boot lid into the boot itself and the obvious place seems to be via the number plate light wiring harness. The attached image illustrates this in item 3. Unfortunately, it’s not obvious how the harness detaches at each end which I’d need to do to feed the cable through.

On the NC the stiffer flexy-outer is held into the cunningly shaped grommet at each end by cable ties. The grommets can be removed by squeezing most of the four plastic clips retaining it, but these are only easily accessible in the boot, and not in the lid.
See the fuzzy pic of the underside of the one in the boot 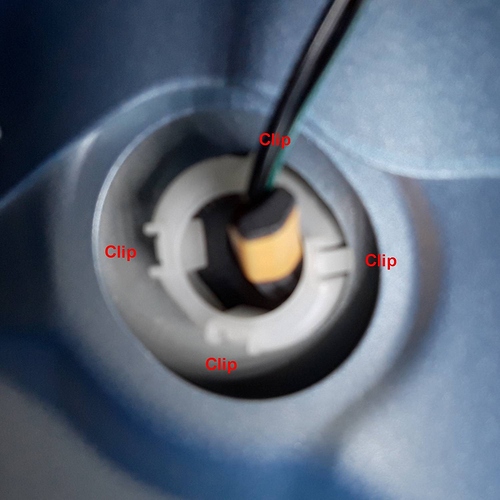 boot-light-grommet1500×1500 175 KB
I looked at this a couple of years ago when deciding between fitting a reversing camera to boot lid or sensors to bumper. A simple measure proved there was not enough room inside the existing flexy-outer to squeeze in the video cable and power cable needed just for the camera, let alone keep the two existing thin wires, so I gave up and chose the sensors.

The main wiring loom goes along under the UK passenger sill cover and up over the wheel arch. There should be plenty of room for access and adding the extras once this cover and few more have been removed.

Incidentally poking a wire through from the cabin to the boot area is probably the hardest part of fitting my camera kit or at least that’s what many people find. Problem is you can’t see where you are poking and finding where the gap is is tricky. One customer commented that he found it simple. He put a high intensity LED torch in the boot and poked towards the light. Now why didn’t I think of that?

I’ve just seen another post in a different thread which addresses this issue and they found that the existing pipe was indeed to small to feed through the cable. They ended up using a wireless transmitter so only the thin poser cable had to be fed through. Not sure if I trust those things to be reliable though.

I expect I’ll end up reverting to Plan B which is to mount it on the main body just above the number plate then I’ve only got to run the wire under the rubber seal into the boot.

Thanks RichardFX, that picture illustrates exactly what I was trying to understand.

I’ll try squeezing the clips and see if I can get the main grommet out. If I can, I may be able to just clip my cable to the existing flexi tube and feed it under the edge of the grommet into the hole into the boot, i.e. abandon the idea of going through the tube itself.

I’ll try squeezing the clips and see if I can get the main grommet out. If I can, I may be able to just clip my cable to the existing flexi tube and feed it under the edge of the grommet into the hole into the boot, i.e. abandon the idea of going through the tube itself.

A single extra thin wire can be squeezed through the flexi, just not a video coax and power. Follow that radio camera advice from DeanF, it is good.

Be warned, if you try and bypass the grommet on it’s outside you are likely to cut though the new single wire on the metal edge of the hole, with sparks and smoke until the fuse(s) blow(s)!