I will be glad when this year is done and gone. I am sick of things going wrong like Freeview going down, washing machine broken, plus another nine things that have been a problem this year. Anyway I had the Catt fitted onto my MX5 Mk1 and drove the car home ok but the gear change seemed to be a bit stiff. After getting home I had to leave the car on the drive for three nights when it was cold and had been raining due to my garage being used for something else. Today I tried to fire up the engine and although it turned over ok it would fire up so it wasn’t the battery. I did something that I have not done for years and that was to remove the spark plugs see if they were wet. Yes they were soaked in petrol but also to my surprise the plug gap was not to spec., it was too small. I soon fixed that and turned the engine over to remove any petrol in the cylinders, and then with that done the engine fired up ok straight away. But and this is the killer, although the gear stick is in neutral I can’t get it move into any of the five gears at all. I haven’t a clue to what has happened so I am hoping some one on here can help me again to know what the problem is and how to fix it. I haven’t done anything to it yet like bleeding the clutch fluid, that’s for tomorrow.

Sorry to hear about all the troubles, sounds a bit odd, even without the clutch you should be able to move it into one or two gears when the engine is off. Check the slave cylinder it’s quite common that goes and is pretty cheap, best thing is to see if you can see it from the drivers wheel arch with the wheel fully turned one way or jacked up whilst someone else puts their foot on the clutch. (obviously never work under an unsupported car without at least two supports - axle stand and jack!) You should be able to see the slave rod moving the clutch arm. If not pump it a few times and try again. If it’s wet then probably the seals in the slave have gone.
If it does move you could always check the turret oil under the gearstick to see if it’s bone dry, it wouldn’t be the first time!

If the slave cyclinder has gone, the clutch pedal will be flat to the floor. If the slave looks ok, but no fluid in the reservoir, the rubber flexi hose over the transmission might have split. Also consider the clutch master cylinder may have failed.

Hi
You say you had the Cat fitted, was this by somebody else and was the car ok before that? if so could it be something from when you had the work done ?
I sympathise with you and hope you find the problem quickly

The car was ok before and after the Catt was fitted. I drove it home ok and it stood outside for about three days at which time I couldn’t get any gear.

Engine or or off or both??

Now you need to find our what’s wrong.

I have topped up the clutch fluid container up to the top of the bar inside of the reservoir but it is still the same nothing has changed. I think that I will have to tow it down to my garage man top get it fixed, after I have had a word with him fist to make an appointment. Something positive has happened this year against all the other things that have gone wrong and that is my daily drive passed its test.

You’d need to bleed the air out of the system to get any action but there is also the problem of determining why you lost fluid in the first place, so it would probably be just as well to get it looked at by a pro.
Are you a member of the AA or anything? If they can’t get your car functioning, they might tow the car to your chosen garage for you…

No, I am not a member of anything like that as I have most of my looked after problems myself but I am too old now to do it anymore particularly when it means getting under the car.

You don’t really need to get under the car to bleed the clutch. The car needs to be lifted, taked the wheel off. The slave cylinder can be seen. I have a bit of narrow tube that I attach to the bleed nipple, and pop into a jamjar with some brake fluid. To bleed, you can prop the clutch pedal in the down position with a cut down broom handle or similar wedged against the seat, or you can gravity bleed. Attach tubing, slacken off the bleed nipple, top up the reservoir, and go off for a cup of tea. Works for me. If you see a puddle of fluid under the car, probably the rubber hose has split. Get a replacement from Mazda (not expensive). Not that hard to fit from the engine bay.

If the brake fluid is disappering without a puddle under the car, or the end of the slave cylinder looking wet, likely the clutch master cylinder has failed. I’ve fitted a couple of pattern master cylnders, and they seem fine, and are not expensive, but I think you can replace the seals in the original… The master cylinder is only held in with a couple of 10mm nuts, one accessible from the engine bay, but the other , you need to get under the dash to the pedal box. 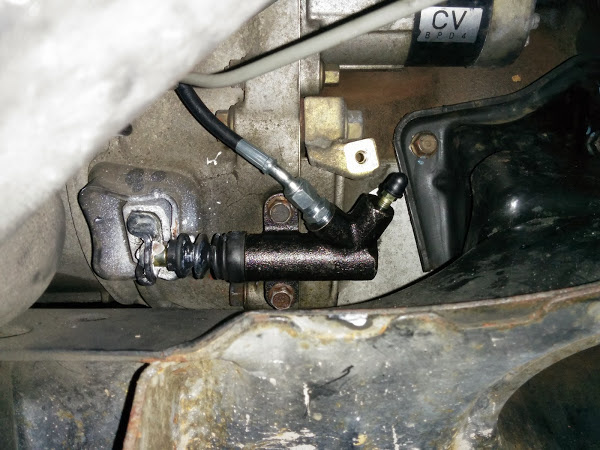 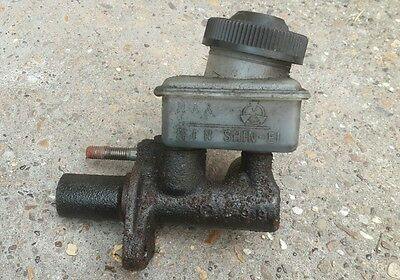 Thank you for all the information. I will be having a look at what you have described as soon as the I can get the the garage warmed up a little. I will clear some stuff out of my garage/ workshop to give me a bit more room and then get a heater on to make it warmer in there, when I have repaired the heater it if I can. This is the latest thing that has packed up working. It’s a good job I am mentally strong or I would have been taken away by the men in white coats by now.
I would like to thank you and every one who has replied to my post, it is probably that which has helped to keep me sane. Please take care of yourselves this winter and look after your own families as you have looked after me these passed few weeks.

Keep smiling and think of what 100 year old Tom said ‘it always gets better’ good luck hope you get it sorted easily and cost effectively.
Kind regards Dave
Ps don’t worry about men in white coats, there is a very long waiting list for them !

It still feels like it is never ending. I started on checking the clutch etc when my golden retriever suddenly went down with Gastro enteritis so every thing was put on hold for two days looking after him, but the good news, in a way I suppose, is that there was no oil to speak of in the slave cylinder. I bought an automatic bleed kit and bled all the old oil out that was left in the cylinder and tubing which was very dark brown, nearly black. Once I got the bleed kit set up it only took me five minutes to bleed it by pumping the clutch pedal. Now I can get it into all the gears with the engine running. I think I might jack the car up on four stands and check the gear box oil level on the next sunny day when I can then do this job outside of my garage/workshop. One more question do you think I should invest in a new OEM slave cylinder rather than buying a repair kit of washers etc. I don’t know if the inside of the slave cylinder will have got worn away over the years. I am tempted to use a repair kit as MX5Parts charge £70.00 for an OEM, when they have them in stock. Has any one used a repair kit and if so what would you advise?

Don’t mess about with the kits buy the aftermarket slave, less than £10. I’ve fitted two of these in the past to my previous Mk1/Mk2

Loosen the feed line first before unbolting the slave cylinder, much easier that way.

The after market slave cylinder at MX5Parts is quite inexpensive but the reviews by people who have bought it, to say the least, are not very good, so much so I don’t understand why MX5Parts keep selling them. The same seems to true of their catalytic converters.

Try this one then.

TBH I’ve bought parts from Mx5parts and as above Autolink with no problems, all good stuff, some aftermarket too. Luck of the draw with some of these pattern parts, maybe Mx5parts parts have changed suppliers.
Anyone else who’s bought these from them recently may comment good or not so, my experience buying them was over 8 years ago.