I’ve will have owned the Mk3 Sport 3 years in August and have made quite a few changes to it in that time.

It was bought from that very nice chap in Sheffield, you know the one that knows a thing or two about MX-5’s. I got him to lower it and do the alignment before I collected it off him (must have it rechecked sometime soon) then I suppose the buying of essential bits and bling began.

This is how it looks today, well from the outside, a few more pics to see at the foot of the post.

The first change to the car was adding a few bits of bling, chrome here and there as they tend to be a bit bland as standard I reckon, also I can’t resist it really. The paint wasn’t the best in parts, it had a few swirls and scratches I could never get out. So I got a man in who knows his detailing stuff and he set about fixing all the imperfections in the paint

Next up were a set of tyres, although the ones on were good the rears would have needed replacing first and I didn’t want different makes on the car. I wanted a set of Kumho’s although the alloys seemed to need a little TLC here and there. Thinking about tyres and an alloy refurb when up popped a set of the later 17" alloys on the forum for sale. I had to have them so after a 6 hour round trip I had a nearly new set of alloys to fit the Kumho’s on. The local Mazda dealer fitted me up with some centre caps for them, a bit pricey at nearly £9 each.

Other stuff has come up for sale on the forum which I have made very good use of, they have been useful improvements rather than just cosmetic. All off one member a radio fitting facia kit, centre console cubby and the decorative dash panel in aluminium finish all at a bargain price.

Using the above enabled me to fit my Alpine double din radio with just a few extra cables to be purchased to do the job.  So with that done up popped another must have mod, a variable wiper stalk, easy one that to do.

So on to the exhaust, I must have a some nice shiny tips and a nice note to the exhaust too. After trying a back box purchased from MX5parts we (the wife as well) decided it wasn’t for us, a bit too loud. So on to a few reviews and I decided it was to be a Cobalt back box. Again I couldn’t resist a bargain, that cost £128 delivered in their sale.

I didn’t really like the all black interior and was thinking about changing the seat/door colour. Having seen a few examples and combinations I guessed this was going to work out expensive so held off for a while and had a re think. Low and behold we had a set of seats + door cards come up on the forum in just the right colour I was thinking of. Another half day out in sunny Wales this time got me the seats I’d been wanting. With a bit of work they have come up really well but still need a little TLC on one bolster.

So we are about there with how I want the car to look, the only big spend now would be to invest in some other suspension set up but I’m happy for now how it all handles and looks. A few more pics below, hope you like… 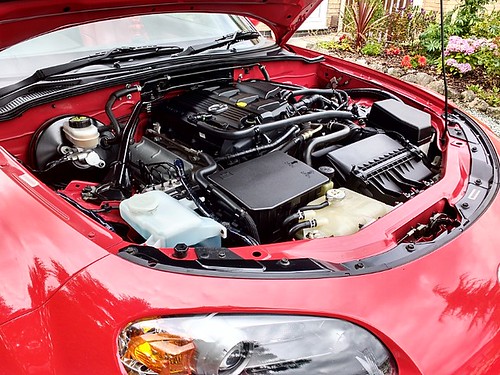 will probably do the same when i finally get a 5.

A set of coilovers, I have some in mind although they will most likely cost a fair few pounds so will hold fire for a while.

Very next job whilst the weather is favourable is getting down and dirty and finish the Dinitrol treatment I started around 18 months ago. Did the rear end and arches, but noticed a couple of patches need attending to there again when I fitted the back box. Then have a look at the front end, arches etc, nothing much wrong as I can see, just preventative stuff.

Brake strip will be done also whilst the wheels are off, I do it every year even though the car has covered less than 4k miles since the last time.

That’s it, hopefully nothing else needed. I did say this around 3 years ago when I’d done everything possible to a Mk2 and ended up with the Mk3. So we will be back to what’s next?