Rubber bushes on rear aluminium hub carriers (Knuckles) worn.
Two worn bushes one on the right hub and one on the left hub. They are both on the front lower adjusting supension links (cam bolt to adjust)
Think they are the camber adjust bolts but not sure.
Been suggested by my independent garage that I could just replace the worn rubber bushes only only (Rear driver and passenger sides). Keeping all other rubbers for a less harsh ride.
Seems like a good idea to keep expense and preserve the ride.
Anyone see pitfalls of this approach.

How many miles on your car before the bushes went?

I’d read the whole hub carriers have got to be replaced, at a brutal £700 or so per side. Try to get mazda to make a contribution if the car has full service history (even though they ain’t a serviceable part). And they replace them with the same design. Which itself is clearly flawed so no doubt one day they’ll go again. Seems a very iffy thing, these hub carrier bushes with the ND
I’d read some polybushes are now available for this issue? Mx-5 parts do them
The later posts of this thread has some info regarding the poly bushes: Mk4 - things to watch out for - #13 by Peter_the_Shark

Bushes have not exactly gone, but when on jacks some slight play evident on each of the rear wheels. More so on the passenger rear wheel.
First noticed at last March 5th annual service at approx 27000 miles (currently almost 30000 miles.)
Really looking to plan ahead for the best course of action
Reluctant to fit polly bushes in all positions.
I understand that handling and longevity are positives of poly bushes. Probably a good choice for racers and track events. Not really me.
On the other hand I am advised that ride is harsher and in time squealing occurs if and when lubrication deteriorates through time.
So rubber is probably best if I want to enjoy my Sunday (or any day) drives up the coast whilst still enjoying country road bends within my capability.
Just thought that it would be a reasonable compromise to only fit poly bushes in the two offending rubber bush positions that happen to be on alignment adjustment positions.
Really looking for opinions on partial poly bushing.

Yes, fair enough. Someone will be along soon enough who knows their stuff to advise.

Do you know if the rear hub carrier bush wear in general for the ND can depend on driving style? Meaning, if someone gives it a bit of a hard regular life, speed bumps/potholes galore etc, the bushes might throw the white flag before someone who babies it a bit? Or is it a lottery?

MX5 parts have Genuine Mazda replacement rear hub assembly complete with all the bushes including the ones that have been failing prematurely . They cost £418.85 incl VAT excluding post and package. Is the £700 per side you quote include labour to replace?

I would think the time to fail would depend on driving style.
Maybe I’m not a sedate driver.
I believe I am careful driver, never lose the back end on corners, go easy over speed bumps, avoid potholes and ill fitted gratings etc. So if I am having “trouble” then they I think they wear in general.
Had a 2007 Mk3 1.8 (NC) for 10 years and apart from replacement of drop links never had any trouble whatsoever with suspension.
Drove the Mark 3 (NC) pretty much as I do the ND, but as a younger man probably with a bit more “gusto”.
Keep the ND for several years and I would expect the MOT will eventually throw worn bushes up.

Is the £700 per side you quote include labour to replace?

I think so. I’d got that figure by some poster(s) who had to have them done as well. They got various contributions from Mazda. I guess if someone has a rubbish dealer who couldn’t be bothered, and said it’s wear and tear and ‘ah, don’t believe all you read on the internet’, if you told them Mazda will/may well contribute, you’d have to contact them direct.

Keep the ND for several years and I would expect the MOT will eventually throw worn bushes up.

Sad, but most probably 100% true. And a brutal cost if you had no help and just did like-for-like.

The 2 ‘bushes’ are in fact spherical bearings that fail. New bearings have been produced which negates the need to replace the hubs. Contact Andy Leslie via MX-5 MK4 ND Owners UK on Facebook.

Hope you get it sorted. A poorly manufactured component which causes unnecessary stress and cost.

Two worn bushes are one on the right hub and one on the left hub. They are both on the front (forward) lower adjusting supension links (cam bolt to adjust).
Are these the same bushes that are the spherical bearings that I should contact Andy Leslie about? 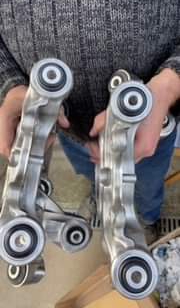 These are the 2 bearings that wear, the rubber bushes are longer lasting

Have I got the dread hub carrier bush/bearing issue? (ignore the higher pitched rattled I dislodged a coin somehow, it’s the deeper one you hear as I round the corner)

Thanks for uploading the video.
I can’t say yes or no as luckily I haven’t got it (yet). However, that definitely sounds like a knocking sound and in line with what others have described.
I noticed it was as you were turning/veering right it occurred, but when you finally tuned left out of the junction (at the end of the video), I didn’t hear it, but I guess you spoke at that point:

(Believe it or not, but that sounded just like when my Mrs’ Juke NISMO RS ended up needing engine mounts. It made that sound when turning right, or reversing out, turning right. The thing with knocking is that it can be a lot of things. As stated though, I’m sure someone will be along and verify if they had the same bushings issue themselves)

I’m not great at locating sound as I have hearing loss in one ear so it could be the front as much as the rear. Thanks for the reply, hoping I don’t haev some big bill looming at service next month.

No worries. Thanks for uploading it as, if it is the bushes, it gives us something to look out for.
Fingers crossed it’s something cheaper. Try pushing for some £££ it is turns out to be the worst. Assuming you still service it at a Mazda gaff.
Keep us posted.

Nah it’s a bit old for that (mine was one of the first NDs imported to the UK registered Sept/Oct 2015, so it’s 6 years old now) it usually goes to see Rodders in Sheffield

By what I’ve read, if he can’t solve it no one can!

skyliu
My ND is the same age as your own (April 2016) but with only 30k miles.
I know that there is wear in my ND hub carrier spherical bushes but am not experiencing the same obvious “clonking” evident in the video.
I believe I am probably in the early stages of the fault.
Like you I go to an independent for servicing, but still able to get the DSR updated through Mazda Customer services, however I would not expect any aid from Mazda.
Should you take your ND to Sheffield I would be interested to hear the diagnosis. If it is the rear hub carrier issue it would give me a good idea of what to expect as mine gets worse.
Still not sure what approach I should take to remedy, but leaning toward replacing rear hub carriers in the interest of a more “comfortable” ride.

Still not sure what approach I should take to remedy, but leaning toward replacing rear hub carriers in the interest of a more “comfortable” ride.

Given the hideous cost of the full hub carrier, I will almost certainly go for the third party replacement bush/bearing. Ride isn’t firm anyway as I’ve have an SE-L not a Sport on the Bilsteins.

Yes, it’d be interesting to see how it pans out if you go the poly bush (from MX5 parts?) route.
Hopefully though the clonking will be something different, easier and cheaper

I’ve got exactly the same car as your’s, just ceramic.