Hi all I’ve been looking since last summer for my next car…and I always come back to the RF! I’d be interested to hear your thoughts on how you’d buy your car if doing it again?

I’m looking to buy a ND RF within the next few months and can’t decide which way to go.

I’ve bought new and pre reg (not MX-5’s) excellent savings to be had pre reg. I’ve also used a car broker for both deals, shop around of course before taking the plunge
I would say right now is a good time to buy, or is it? There still seems to be cars up for grabs but I don’t know if it’s on to buy right now or a no no!
Maybe when you can jump in when all this is over they’ll need your custom.

I bought a pre registered MX5 NBFL in 2003 and saved money at the time so a good decision and I still own it.

My daily driver has always been new including a few company cars. However this time I bought an 11 month old Golf in Feb saving £6500 on the cost of a new one.

It was an ex company car and came with 2 years manufacturers warranty remaining plus a 30 day no quibble money back guarantee.

Its in great condition apart from a few light scratches which my detailer removed as well as cleaning and detailing the whole car.

I’d have preferred new but I had to balance this with the £6500 saving and as I’m now retired it was the right deal for me.

I guess its down to personal choice and what suits you best.

Over the years I have purchased three ex demo MX5’s, All had less than a 1000 miles on the clock and had 30 months warranty left on the car.

Big savings on new and you can also purchase an ex demo or pre reg car on PCP if you wanted to.

Pre-registered makes a lot of sense to me if you can get the colour and most of the spec you want. Bought my NC 2.0 Sport that way. However my current 2.0 ND was bought last September 30th, taking advantage of generous Mazda offers to shift stock before the new penalties were imposed linked to emissions.

There will be deals after this bloody Covid19 thing settles, the car dealerships as with many other businesses are going to be on their arse and wanting to have a deal I’m sure.

For me personally I’ve bought new for the past few years, as you said “you are the only one that has driven it” it still may have been thrashed but at least it was by me!

It’s all a matter of gauging the market, and working out what you are prepared to pay for what models from the various makes. Then an informed decision can bag an unexpected bargain. Haggling can help as well.

The market is even more aimed at the buyer today, a haggler’s charter; can you keep your nerve and hold off buying while prices crippled by C-19 continue to drop? Will the car still be supported with spares, consumables and service in a year’s time.

When my old Vextra suddenly died prematurely because of a broken spring in the cambelt tensioner, we were a bit stuffed and hired a dismally underpowered diesel Focus for a fortnight for SWMBO to drive while I short-listed various nearly new cars for her to give the OK on; all the dealers were extremely keen to give me a “really good trade-in deal” on the garage-queen NC I was shopping around in.

None of the cars we looked at fitted her because of the (then) fashion on seat shape with side wings interfering with her elbow when trying to change gear etc! Also all had weedy little engines overstressed by a turbo, not much fun to drive but if needs must…

Eventually we were sitting in a Fabia in a Skoda garage having rejected those as well (after Ford, VX, BM, Audi, Pug, etc) while my NC was being serviced by the Mazda dealer across the way. Through the window she could see lurking in the back-lot a soul red Mazda3 (we were looking for a rust resistant blue Euro-box, pale-blue if possible): “That looks nice.”
“Red? Really?”
“That’s OK.”
Two minutes later, “It fits. Can I take it for a test drive?”
An hour later the pre-reg (one month earlier and 40 miles on the clock) now had 55 miles on the clock and new owners. 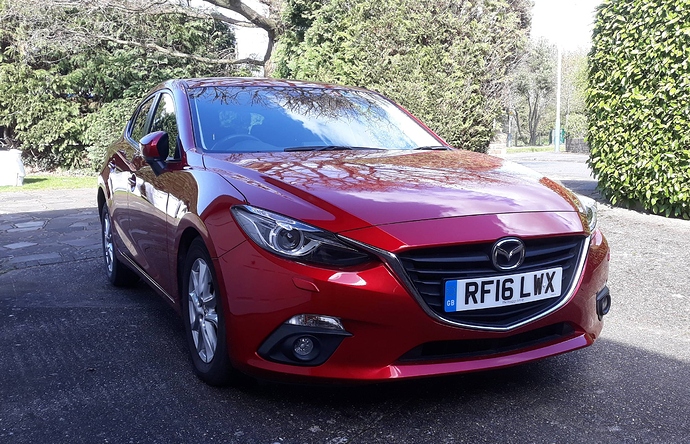 20200406_154343_c2500×1609 848 KB
We paid three and a half grand below normal list, and then haggled all the usual extras to be thrown in: diamond-coat (already on the car), recovery, all mats, full year of tax (only £35!), full tank of fuel. Warranty and sat-nav period start dates were moved on to when we drove away the car at the beginning of the month a couple of days later.

Prior to our looking at this particular Mazda3 I had not considered a Mazda as a daily driver, simply because the Mazda rust warranty specifically excludes salt corrosion damage, and is therefore worthless in UK.
Hence the first extra I added almost the next day was under-seal and wax injection at an independent specialist!
The second extra was proper kick plates on the door sills, because the vastly overpriced Mazda ones did not extend wide enough over the edge to protect the paint at the most critical point of the fold over where female heels would be chipping the paint. 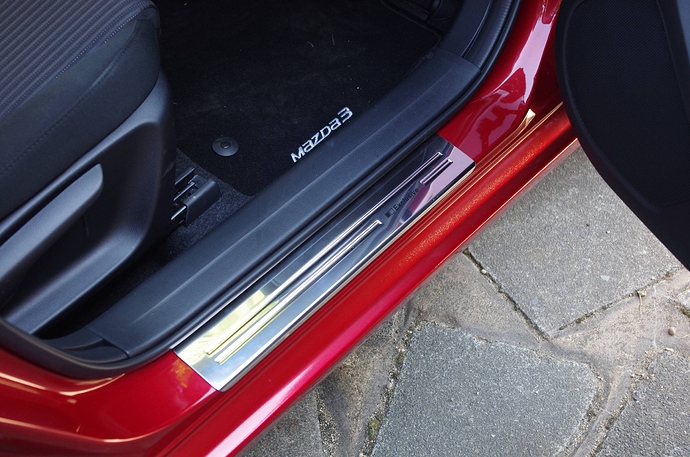 It is a brilliant car and now, after 14,000 miles it has loosened up a bit and properly run-in, it goes rather well especially if one uses the revs (not available on a turbbbbo). The only thing I’d change about it is the tyres - the Toyo Nanoenergy are too noisy and their grip is iffy.

Cheers for all the replies guys

The current Audi is on pcp and will be going back in Sept if I can’t do a deal on it before then. I don’t want to hand it back if it can be helped, as I don’t want to feel rushed and buy something just because that is going back and I’d be without a car.

And this low miles used seems a bargain, not my first colour choice though!
https://www.autotrader.co.uk/classified/advert/202003037965053?

Talking spec I’ve been looking at the 2.0 184ps as I’m used to quick cars (300bhp S3 before this A5), but what about model variant, is the GT worth the extra over the sport nav+?

Am I correct in thinking to get the Limited Slip Differential you need the 2.0 and at least the sport nav+?

I like the latest GT sport tech, but wow a lot of money for something that’s meant to be a cheap sports car! Be interesting to see how those go price wise pre reg or used.