Hello everyone, Michael here, been lurking for 6 months and finally taken the plunge to buy my beautiful Euphonic NB ‘Geoff’. 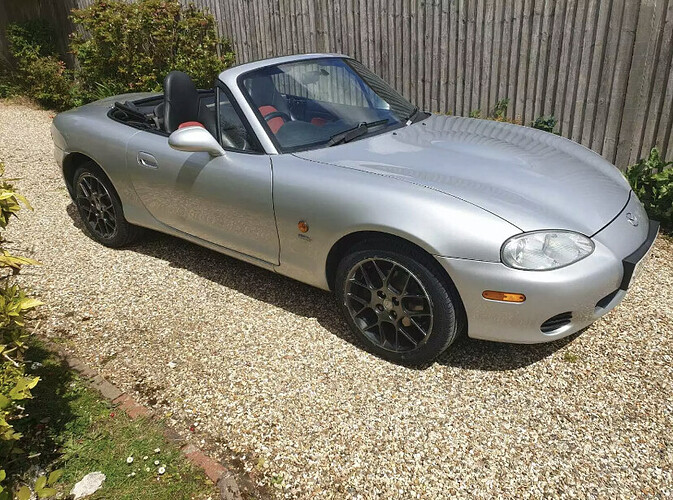 Geoff was selected because he had newish cills, new tires, and was freshly serviced.

However, two days later this happened on the M4: 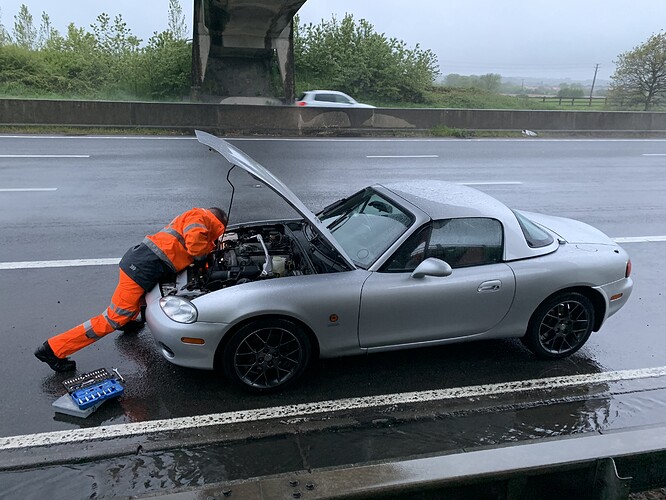 Turns out whoever did the service didn’t tighten up the adjuster bolt on the alternator and it literally dropped off at 70mph so running with lights and wipers I was quickly out of power. The ignominy of calling the RAC out for a 2 minute job!

Geoff is now with C&C Sparks in Bisley for new chassis rails and a new radiator and I have big plans to give him a supercharger next year as I am coming from a car with a bit more grunt so do notice being about 50bhp down.

Looking forward to meeting some like minded people at some drive outs and meets in the coming summer months!

There’s a rare site. An mx5 on the hard shoulder! Welcome.

Hi and welcome to MX5 ownership !

I know and the frustrating thing is it was such a preventable cause! Bought the car because it had been serviced, wouldn’t have broken down if it hadn’t been!

Hello and welcome from Nottinghamshire… Sorry to see you stuck on the M4 for a bit because the “spanner” couldn’t tighten up the bolt… Hopefully just a blip in the pleasure of MX-5 ownership…!
Rob

Oh I’m so in love with actually owning a proper rear wheel drive roadster for the first time in my life (long term Mini company car driver) that I’ve written it off as a bonding experience.

When I called my wife to say I had broken down in the rain and had a 2 hour wait for recovery she told me, ‘you are way too happy about this, you’ve spent far too much time watching Top Gear!’

Thanks! I’m pretty happy with it and so was Colin at C&C Sparks when he gave it the once over. Will post a few more pics once it is back from getting the rails and radiator done.

Thanks Nick, I’m sure it will be fun and financially ruinous!