PHRT opening and closing on slopes

When I got my car a month ago the dealer said “always find a flat road before opening and closing the roof”. So at the moment I have to get my car out on the road and do this like some sort of a peacock for the neighbours. Can anyone tell me if it’s ok to operate the roof when it’s on a slight incline (but fairly flat side to side).

I’ve never heard that advice before. I am pretty sure when I had my Sport Graphite and 25AE that I didn’t pay attention to what incline I was on when I opened / closed the roof. Be interesting to see if anyone else has heard of this advice before.

Hello, when I bought mine the guy at the garage did mention it; though he said it would only really cause any problems if you were on a mountainside!!! It is more an issue on a steep sideways incline rather than nose uphill or downhill. Hope that makes sense; though I quite like the performing peacock image

I think its more of a misconception. If you have the car manual you can check if there is anything like that. Personally I would make sure the road is flat, you are not twisting the car chassis for example you have one wheel on the pavement etc. either its uphill or not it wouldn’t matter to me (logically).

Yes I’d say it’s ok on a slope flat side to side, that’s what I’d probably do.

you will get your best aligned closure on the flat.
so if your closing it for whats going o be some time then yes seek out a nice flat place.
front to rear to slope dosnt seem to make any difference on mine.
left n right slope a little.
what my roof dont like is uneven ground when all 4 wheels are at different heights. 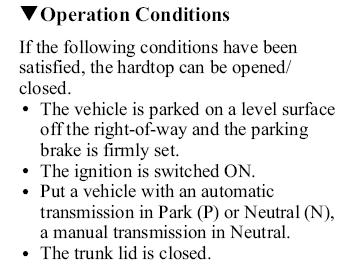 I still think thats more of a H&S rubbish rather than an actual guidance how to use it. I mean in this day and age the amount of rubbish companies put into their instructions for their products so they can’t get sued is beyond me. I wouldn’t be surprised if one day they would say don’t open the bonnet, it contains moving parts that can cause serious injury or something silly along these lines.

I would understand if the car is loaded in torsion (like if one wheel is on a pavement) the roof would be misaligned but as long as the road is flat (doesn’t really matter if its level or not) there wouldn’t be any logical reason why it can’t lock and unlock.

Interesting, I don’t remember every being told this at a dealers and I guess didn’t spot that in the manual!

Yes it’s recommended to operate the roof on a flat terrain only. It might be so to avoid straining the electric motors, and/or the cogs.
A slight incline is ok though.

My RF handbook warns similarly. As the driveway is 1in 4 or so I adopted the “peacock “ method!

I can see that on serious grades like mine the balance of moving parts during operation could be at, near or outside design parameters.

I wouldn’t be surprised if one day they would say don’t open the bonnet, it contains moving parts that can cause serious injury or something silly along these lines.

I’d be darned… It has happened already…

How do I open the Mercedes EQS's hood? - Alt Car news

Even though there are warnings not to open the hood of a Mercedes EQS electric vehicle, is it even possible?

Maybe the Peacock method is good. They do it to attract the opposite sex

That Mercedes thing is the funniest thing ever

Regularly use mine on a slope with no issue, also use a smarttop module to open and close at up to 30 mph with no issues so whilst some care should clearly be taken they aren’t as delicate as the manual makes out. Obviously down to individuals how much of a risk they want to take. I’ll confess it took me a lot of testing before I was confident using the smarttop at anything over walking speed

Peacocking season is over. The slope isn’t too sharp so I’ll be opening and closing before in my parking space.

What’s really funny is watching somebody making contact with 400v with their feet in a puddle.

First time I’ve heard this. Its never been an issue on mine. Never even considered the gradient of the road.