I’ve got an NC. I want to buy PU bump stops for my to be installed Bilstein B12 suspension. FloFlex has sets including other bushings for the shock spring set, made from PU. Is this recommendable? 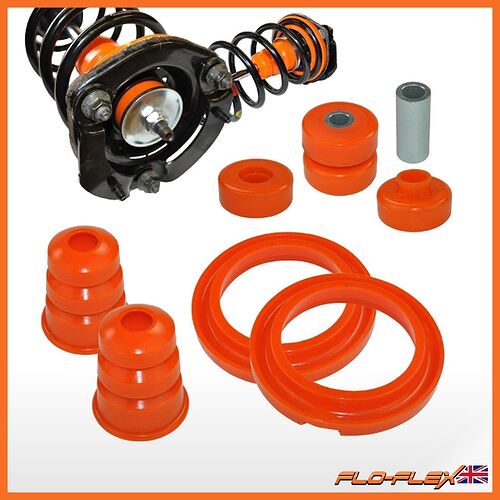 These high performance polyurethane bushes are the an ideal alternative to OEM rubber bushes. Benefiting from better road handling and longevity choosing a poly bush instead of aftermarket or manufacturers OEM part makes perfect sense. We manufacture...

Personally I would go OEM bushes. I don’t know how the polyurethane bushes will behave as they will be stiffer (I do know they need lubricating from time to time or they will squeak) but I know the OEM will work just fine (so fit and forget).

Yeah, but, apart from the bushings other than the bump stops, aren’t your bump stops supposed to be shorter and stiffer like the new suspension?

Although this is an assumption, the oem bump stop will stop the damper piston from hitting the internal walls of the chamber. I don’t know if you use a shorter bump stop there is enough clearance inside. Technically because you will use shorter springs you want as much stroke you can get so yea if there is enough clearance a shorter bump stops will benefit you.

If you buy new damper kit from bilsten, wouldn’t it come with bumpstops? (I would expect it to)

If you buy new i think bilsten offer three dampers for the nc, depending what springs you want to use and what type of dampers (and to what extent how much you want to spend). Having said that koni also offer a set of damper for the nc.

I bought it second hand (it’s a young set) but I believe that new sets are also sold without.

personally I would ring Bilstein and ask them. Tbh I think they should come with the bump stop if its a complete shock absorber kit. If you are supposed to reuse bits from the old suspension (like the top hats) they may expect you to use the OEM stuff. If you have to do the latter I’d buy OEM bushes.

Bilstein Shocks.co.uk is the number one supplier for Bilstein shock absorbers and suspension kits. Our online shop has thousands of suspension car parts listed.

Good tip. I’ll give them a call!