I made an impulse purchase of a Kahtec smart brake light unit (flashes the top brake 6 times when you apply the brake pedal), and it’s arrived today from the USA.

Installation appears to be simple, but I’m not sure of how easy or otherwise it is to access the power cable for the light? I’m laid up with a minor health issue for a few days, so can’t go out and have a look around.

Has anyone installed this, and is it easy to get at the wiring?

I fitted a flashing unit to my NC boot rack diodes, i now have all three standard brake lights working as normal but the rack ‘diode’ lights flash about six times before going solid.
If i remember correctly the third brake light which i had to tap into had a tail possibly 12" long with a plug which connected into the loom.
This was about eight years ago so memory has faded a bit.
Job took less than 30mins.

I fitted one to my previous NC. IIRC, I removed the panel behind the seats in the boot and spliced in there, where the cable comes down from the light itself. I also fitted a simple switch in the circuit which would defeat the flashing third brake light if for whatever reason, you did not want it displaying

Having thought about this i now remember not tapping into the third light as i was only wiring the rack light, i tapped into the nearside rear light loom.
Ignore my 1st post.

Wiring runs on the underside of the prht lid. There is a connector over towards the passenger side. There are a couple of cable ties and some woven black covering holding it up.

Thanks for the advice folks, looking forward to having a go at it next week. The MX-5 seems to attract an unusually high number of rear-bumper huggers so hoping the flashing brake light might cause them to back off a little.

Has anybody who has fitted the flashing brake light module had problems at MoT time?

I thought of fitting one, but reading about them led me to understand that they are not legal for use in the UK.

(I’m also concerned about the effect on the car behind me in stop/go traffic. It always irritates me when the driver in front of me keeps their foot on the brake pedal when stopped at traffic lights, especially in the wet and at night, as it destroys my night vision. Brake lights that keep flashing would be even more irritating).

Hiya, see my earlier post. I didn’t directly reference MOT time but having a switch in line, allowed me to revert back to standard at, literally, the flick of a switch.

I’m also conscious of irritating people behind me with brake lights on. This version (Delay) helps here

I’ve now had a chance to look at the underside of the PRHT lid, and it’s exactly as you describe. I’m a bit nervous about removing the woven covering, which appears to be glued on. Did you re-glue it afterwards?
Thanks

I too have the problem of the MX5 seeming to attract tailgaters. Drives me nuts, never happens with the BeeEmm…

the MX5 seeming to attract tailgaters

You are not using the brakes enough!

Extra-bright brake lights can be a good deterrent, even if only touching the pedal only enough to operate the switch…

And if you don’t brake violently they cannot complain about being brake-tested.

My driving style in the MX-5 isn’t really different (particularly on motorways) than when driving any of the many other cars I’ve driven. You always get idiots who want to drive way too close, but it definitely seems more frequent with the Mazda - and a touch of the pedal is less likely to make them back off a little. I suspect it’s both the issues you mention - the car is small and low, but also represents a challenge to people who want to race. I never had this problem with my old Volvo 244 estate!

Interesting point about the extra bright brake lights. I’ll look at getting some.

The fact remains though, it doesn’t happen with the Bee Emm…

Tailgater’s seem to be a common problem in general, but I also get the same problem when in the 5, there’s always some complete and utter moron right behind me , well I recon it’s something to do with the fact that it’s a sports car, and some idiots are intimidated by that , and yes I think it’s the wanna race thing .
Many a time I’ve seen a genuine performance car like a Porsche or similar going down the dual carriageway with some moron in an old Sierra with fat wheels and bucket sized exhaust right up his jacksey.
Call me Victor Meldrew, but these people are breeding and there everywhere.

PS
Not being much of a technical fella, is it possible to buy brighter brake light bulbs , that can just be easily swapped with the originals, but which are considerably brighter ?

LED bulbs would fit the bill.

I’ve put them in sidelights, foglights (to act as DRLs), reversing light and rear fog but not stop 'n tail as yet.

That tape is the devils work. It tends to stretch when you remove it. A hot air gun etc may allow it to come off in better shape and refit but to be honest I butchered mine. A replacement could be made I thought from black velcro loop fabric stuck to self adhesive hook tape on the body side.

I did a round trip to Worcester to sell my other car on Wednesday. Someone driving a pimped Clio with tinted windows took great exception to being overtaken on the M42 and proceeded to pull the “pull out, overtake, slow down” game.

I just set the cruise control to 70 (it was fairly busy) and let him get on with it, which resulted in at least six or seven passes before that car pulled off.

There’s a lot of it about!

is it possible to buy brighter brake light bulbs , that can just be easily swapped with the originals,

If you make sure to get RED LED bulbs for the Stop/Tail lights (or rear Fog) then none of the light power is wasted in the red lens, unlike a white bulb where most of it is lost. This is worthwhile.

I’ve fitted a T20 RED LED (no longer available) as the Fog bulb and it is about three times brighter seen from outside the car than a T20 WHITE LED of same lumen (lm = brightness rating) and current usage from the same manufacturer (Aglint) in the same socket.

With the original filament bulb it does not matter which end is + or -. 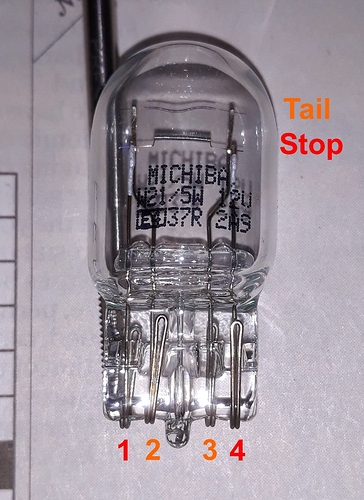 But be careful, because while there is an agreed standard, some bulbs might (anecdotal on the web) connect the four pins in a different way to the contacts in the socket in our car.

With some of the LED bulbs polarity matters, others don’t care. If they say 12V/24V then they are much less likely to care about polarity and will have cunning control chips monitoring temperature and current.

Some LED bulbs include extra load resistors to fool CANBUS, these are irrelevant in an NC and a waste of power merely shortening the bulb life by cooking it needlessly.

I’ve been looking for a suitable Stop/Tail candidate since the middle of last year, but have yet to make my mind up, although I have replaced the weedy T15 reversing light (why did Mazda not fit a meaty T20 like the Fog?) with a compromise (gets much too hot) WHITE LED.

My criteria for the Stop/Tail (just me being picky)

I’m tempted by some Phirips LEDs, but they are expensive for an experiment and the specification is not that great for the lumens (20/100 Red) although better than the Osram offering. The Tail will not cook the bulb, but is there enough welly from the Stop?

And of course these are not legal for use on the public highway if not original equipment.

I have a flashing brake light wired into my boot rack and it does seem to deter maybe 40% of the tail gaiters it doesn’t deter the idiots, mine flashes six times before going solid.
My next mod will be a small red led that blinks slowly mounted in the wind break giving the impression of a rearward facing camera.