Top 10 sports cars that didn’t age well at all 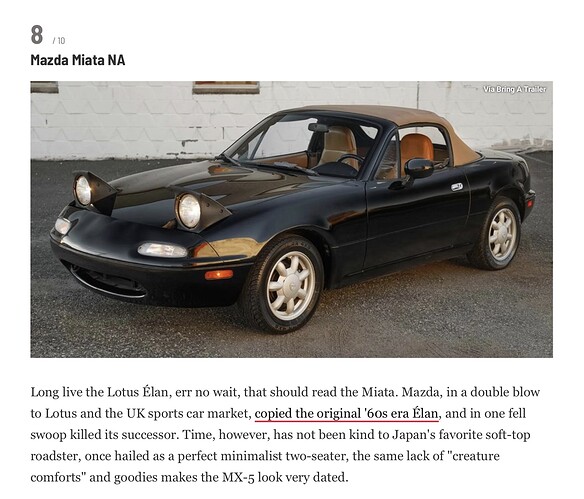 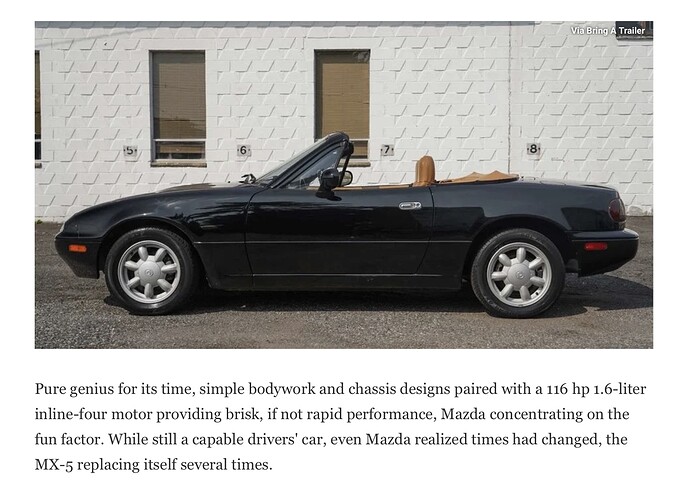 Mind you, it’s in with some illustrious company.

One reason I guess why Yanks bought in thousands is because they could not really make one themselves.
Like most else they import.
It’s desirability is based on it actually being dated for Pete’s sakes.

Why is Clickbait being discussed, as if there is any actual point to be made.

Bit of nonsense to suggest the Americans couldn’t make the MX5, when it was quite a few Americans who made the project work. Brits didn’t really take to the NA when launched,. looking at the small sales numbers. 56% of car sales in US are domestic brands.

Our domestic brands are…?

What a bizarre write up. Which cars in constant production over the last 30+ years haven’t been updated?

My opinion Saz.
And yet…here you are Saz…bla bla bla.
How condescending

Do not "talk " down to me again.
This not Tehran or Moscow.
Modify your approach to another forum user’s posts in future no matter what you personally feel.
I’m 70 next week sonny boy not ten.
It’s a free society here…so far.
Do you think I did not know your historic guff?

Having engineers and design masters develop something and push through the politics is one thing.
Setting up a manufacturing base and actually making it, quite another.
Show me what the USA ever produced that ever got close.
Actually, why a Stateside plant was never sanctioned.
( I do not care but it may keep you out of mischief.)

Or you could do some proper moderating with this sort of stuff.
Fiberglass wings

Bit of nonsense to suggest the Americans couldn’t make the MX5, when it was quite a few Americans who made the project work

They could have made it, but they didn’t and probably wouldn’t have. It was even Bob Hall’s idea, per legend, but I doubt if the American car industry would have touched it.

Bit like their TV programmes. They play a percentage game. They could have made say Blackadder, except none of the big car makers would have signed it off.

It’s hard to market research novel products in advance. The classic case study, whether the story is true or not, being the Sony Walkman. They made it anyway because the chairman Akio Morita wanted it. The sales projections were modest. They sold 150 million before they’d finished.

If left to Mazda, it would have been a long forgotten obscure MR2 wannabe (they wanted MR, to copy Toyota). Without Americans, MG would have gone 80 years ago.

We never saw the Soltice twins over here. By all accounts, that car was a very good roadster, canned because the market disappeared. At the same time as the Miata, Ford came out with a different interpretation of a sporty roadster, the Mercury Capri; using the same Mazda motor, but in a FF configuration. Decent little car, different sort of character. What was Britain doing at the time? Cranking out shoddy plastic Reliants, and something from the 1950s.

American car makers didn’t, but that does not mean they couldn’t. Right now, current news is full of the American Can Do Spirit once again.

We all know that the NA is an amazing car. It was a worldwide collaboration too. American ideas man, UK classics inspiration, Japanese manufacturing techniques and probably a lot more besides.

In the words of Winston Churchill, ‘You can’t believe everything you read on the Internet’.

Aircon maybe a rarity in Europe at the time, but not elsewhere.

At the time, Top Gear decided purists would not approve of the 1990 Miata. Ironic really. 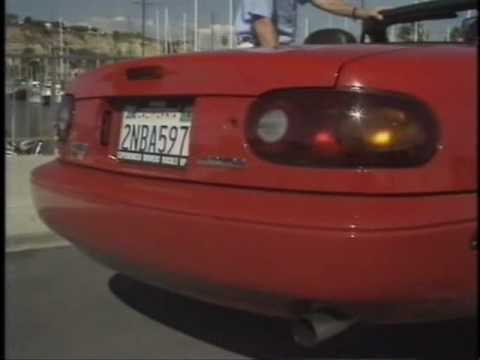