Which NC2 roadster should I get? [North West - 6k budget]

Overview
Looking for a NC2 Roadster in the North-West with a budget of 6k.
Intended to be used as a daily driver but I work from home so don’t do much driving during the week. I’m also planning on using it for trips around the UK once lockdown is lifted.

Hi Kyle and welcome from Nottinghamshire. Firstly, any NC, as with most MX-5’s do need checking for rust… Reliability is good across the range, and whether you choose the powered hard top or soft top would largely be personal preference. If you can travel to find the best one I would - There are a few on CarGurus website too… Hope this helps.

Thanks Rob for your reply,

Yeh, I’ve been having a good read about rust and it seems to be the rear arches which are most problematic.

I think I’m learning towards the Hard tops as I think it will be better for keeping the rain out as I have to leave the car outside.

And like you said the reliability should be good across the board but I have heard people having issues with the crank which has been strengthen in the NC3.5 that’s why I’m slightly leaning towards it for that reason. The general advice seems to be check for good Service History and regular oil changes.

However, I have seen NC1 Hard tops with less miles and cheaper which I might consider if the difference isn’t that great.

I’ve also been looking at https://www.supercarclassics.co.uk/ too as they’re a MX5 specialist garage too.

Be aware that the prht roof is more viable for a daily driver stored outside but it is not a particularly quiet cabin to be in as most of the noise generated is from the rear wheels/arch area and this tends to resonate around the cabin.
Facelift 3.5 onwards also have better cabin knee room due to the modified cup holders in the door cards which may be a significant issue depending on your height or build.

Preventing damp is more important than road noise, thanks for letting me know.

I’m 6’ and i’ve seen others complain about cabin space too so that’s another pro for the NC3.5.

The 3.5 is definitely worthwhile looking out for at your price range as there are so many little changes over the mk3 that make it worthwhile. I wouldn’t be too worried about mileage, 100k for a 2009 is still only 9000 miles a year! Personally I’d rather a 10yr old+ car that’s been driven and maintained than a low mileage one that’s been stuck in a garage and only had minimum maintenance. Check the MOT history on DVLA site as it will tell you how the car has been driven. I would avoid cars that have done all their mileage in first 2-3 years then only done 250 a year for the next 8! (just my preference)
If you are keeping in a garage then soft top mk3.5 is lighter and much quicker to take up & down (also less to go wrong) The mk3.5 2.0 soft tops are quite rare as most 2.0 mk3.5 sold were hard tops.
6ft is probably just right for a mk3 or 3.5, I’m 6’2.5" and I’m still struggling with legroom after 6 months

I watched a video of a guy who was 6’1 and said the first thing he added was a roll bar because his head would hit the floor before the little stock silver rolls bars behind the headrests.

I am biased but I love my 3.5 hardtop. It revs a bit higher, has a few small improvements across the car and whilst I prefer the look of the soft top with it down, the ease of popping the hard top up or down at traffic lights in a few seconds wins for me.
I would definitely recommend speaking to Paul Roddison he really knows his stuff.
Condition, especially the bodywork is the key consideration, mechanicals are virtually bullet proof.
It would recommend factoring in a suspension lowering to get rid of the tractor look and improve float over crests, but it depends how you use it, the standard suspension is fine but can be better.

Hardtops stay clean more easily and there are no reports of common problems with them.
You should be able to get mk3.5 for 6k with lower mileage than 100k.
Are you avoiding cat C or D cars?

I thought I would of found more after reading so much about how cheap and available they are. The ones I have found are on the other side of the country which I might have to end up doing

I have been ignoring Cat C and D but I might consider it.

I would prefer the soft top for just being able to quickly throw it back but a hard top will be way more practical for me right now.

Just had a look on Autotrader and indeed it is slim pickings.
Only 2 roadsters with less than 70k miles for under £6500.
You might have to go for the soft top, or wait for the autumn.

When I got my mk3.5 I thought I was going to lower it, as an old mk3 I had previously for a short time handled like a boat until it was lowered. However most of the 3.5 sport tech seem to come not as high on stilts as the mk3. Mine is on stock Bilstiens (pic below) and with a good alignment at WIM the handling is night & day compared to my old mk3.
And regarding the roll bar, it’s all relative yes your head does stick up higher than ideal but compared to a mk1 or 2 where there are no factory roll hoops and much weaker windscreen pillars… A standard mk3/3.5 should be a whole safer place to be! 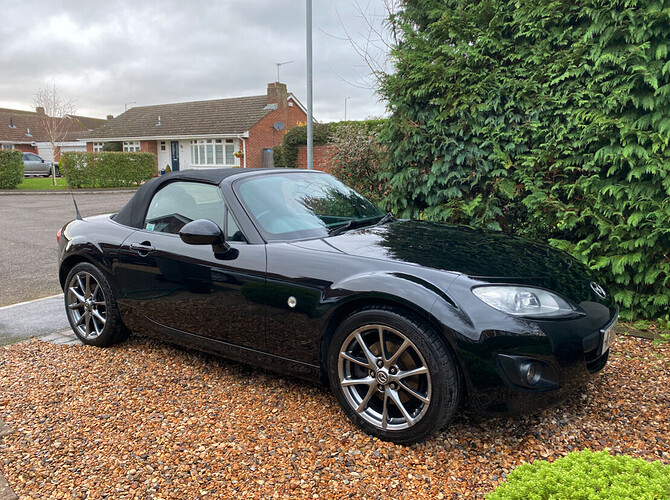 I have been ignoring Cat C and D but I might consider it.

Personally I would avoid them unless you know the repairer or can validate what exactly was done. They a written off because they are too expensive to repair, it only becomes viable if they are done as cheaply as possible, often in a garage at the back of someone’s house, then sold through auction with no guarantees.
(I have friends who used to do this and even bought a particular car I had helped with, but most they did I would not touch, I also live close to the UK’s largest salvage auction house and see every day what is being carted off for ‘cost effective’ repair).

We had a fairly new car repaired after a heavy accident and it was never written off, but handled like a crab, and that was by the authorised main dealers. Corrosion protection is also an issue on write offs but as the MX5 hardly has any, maybe not such an issue after all

On the plus side they are cheap but can be more difficult to get rid of than herpes.

I think it is supposed to take 11 seconds for the folding roof to do its stuff.
Hardly an eternity…

Strongly considering this. It is high mileage which is a concern but does have Full service history Price: £5,495. Just in stock we have a rather gorgeous Mazda MX-5 2.0 Sport Tech Roadster 2dr, finished in metallic grey with ebony leather interior. This 1 owner car has full service history, it’s apparent by its condition it’s been cherished,...

Hi, drove from Aberdeen last August and bought an 2011, 2.0L NC 3.5 from Supercar Classics. Retractable hardtop. They had a decent selection and a regular turnover of stock so well worth checking. It was a sunny day and a lot of people looking whilst we were there. Car had 30,000 miles on it and cost £9K. Had lots of fun in it until the second lockdown happened.
Supercarclassics MOT’d and serviced it before delivery. It failed MOT on rear tyre tread depth so they replaced the tyres putting on Landsail tyres. Pirellis of decent tread depth were on the front. The handling was scary with the Landsail tyres with the rear appearing to go “loose” on turn in (flexible side walls on the tyres?). My pal has a garage and suggested changing the rear Landsails for the front Pirellis. That done the problem disappeared. Binned the Landsails with only a couple of hundred miles on them and got two more Pirellis. Had they asked, I would have paid the difference between a known brand of tyre and the Landsails which I’d never heard of until then. Since getting the car I’ve had lots of great advice from this forum and worked my way through leak problems which are well documented on here: - left hand side grommet holding the windscreen trim on, high level brake light, boot seal, aerial etc. Have a new driver’s side central locking actuator to fit after the central locking on the door failed about six months after getting the car. Hope you find what you are looking for soon in time to enjoy this summer.

I’ve been looking a Supercarclassics because they are quite close to me and they’re MX5 specialist so they have a really good selection. It’s good to hear they do a service and MOT before sale but
I agree with you though I would of paid the extra to get matching tyres though.

One of the main reasons I want to get a MX5 is the community around the car and the amount of support and aftermarket stuff is amazing I don’t think any other car matches it. Hopefully I don’t need to read the forum for fixes but it’s really good to hear that it is full of helpful advice if needs be.