I know this topic has been covered a few times, but I wanted to put my experiences down, in case I uncovered any useful info…

I recently replaced the CD player head unit in my 2011 Sport Tech, with a DDIN unit.  This was mostly for navigation purposes, but I also wanted Bluetooth audio.

The new head unit I chose had preamp outputs, so I could properly interface with the Bose amplifier.  I also wanted to make sure that nothing I did required reverse-engineering later, if I pop the original head unit back in.  So, no modifications to the original Mazda wiring.

For this, I followed all the standard guidance.  For the 3.5/mk3/NC model, to remove the radio and corresponding fascia there are four important steps:

i. Remove the centre console (by which I mean the trim which runs between the seats, housing the cup holder/storage tray, window switches, etc):  1 screw in central cup holder and 2 under the pop-off panel at the rear of the console.

ii. Remove the footwell side panels (by which I mean the trim which extends from the centre console into the footwells on both sides:  1 screw each, revealed when centre is console removed.

iii. Remove the trim under the steering column (pops off).

iv. Remove the radio fascia (includes the radio and A/C controls): 2 screws, plus hidden security bolt which can only be accessed from in the drivers-side footwell, aside the steering column.

At this point, you will observe that the stock head unit has one large multi-way connector, plus the aerial.  Remove these and also the connector for the A/C controls.

I had to do some research and take some continuity measurements to fully understand how the power amp is wired.  It’s pretty straightforward actually: 4 pairs of wires go from the head unit to the power amp, plus one extra wire sends a signal to turn the power amp on when the head unit is powered (amp control).  Any other connections to the power amp are not related to the head unit.  My finished connection diagram is like this (note, this is a modification of an Audi Bose wiring diagram which I found online): 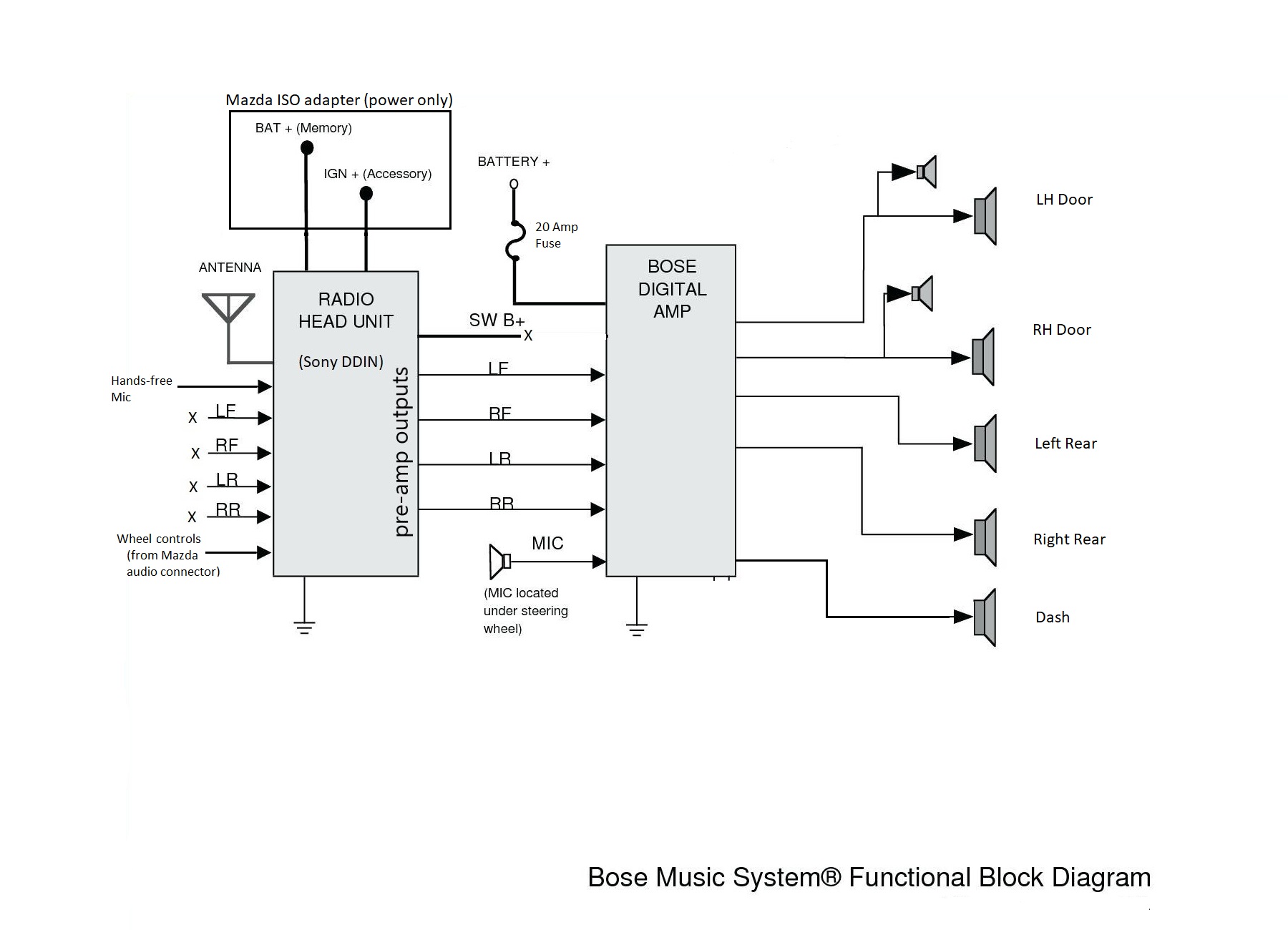 i. Firstly, I prepped the basic power wiring.  The Mazda ISO adaptor separates the power and audio connections from the big multi-way connector.  The smaller black connector is power, while the dark red/brown connector is audio: 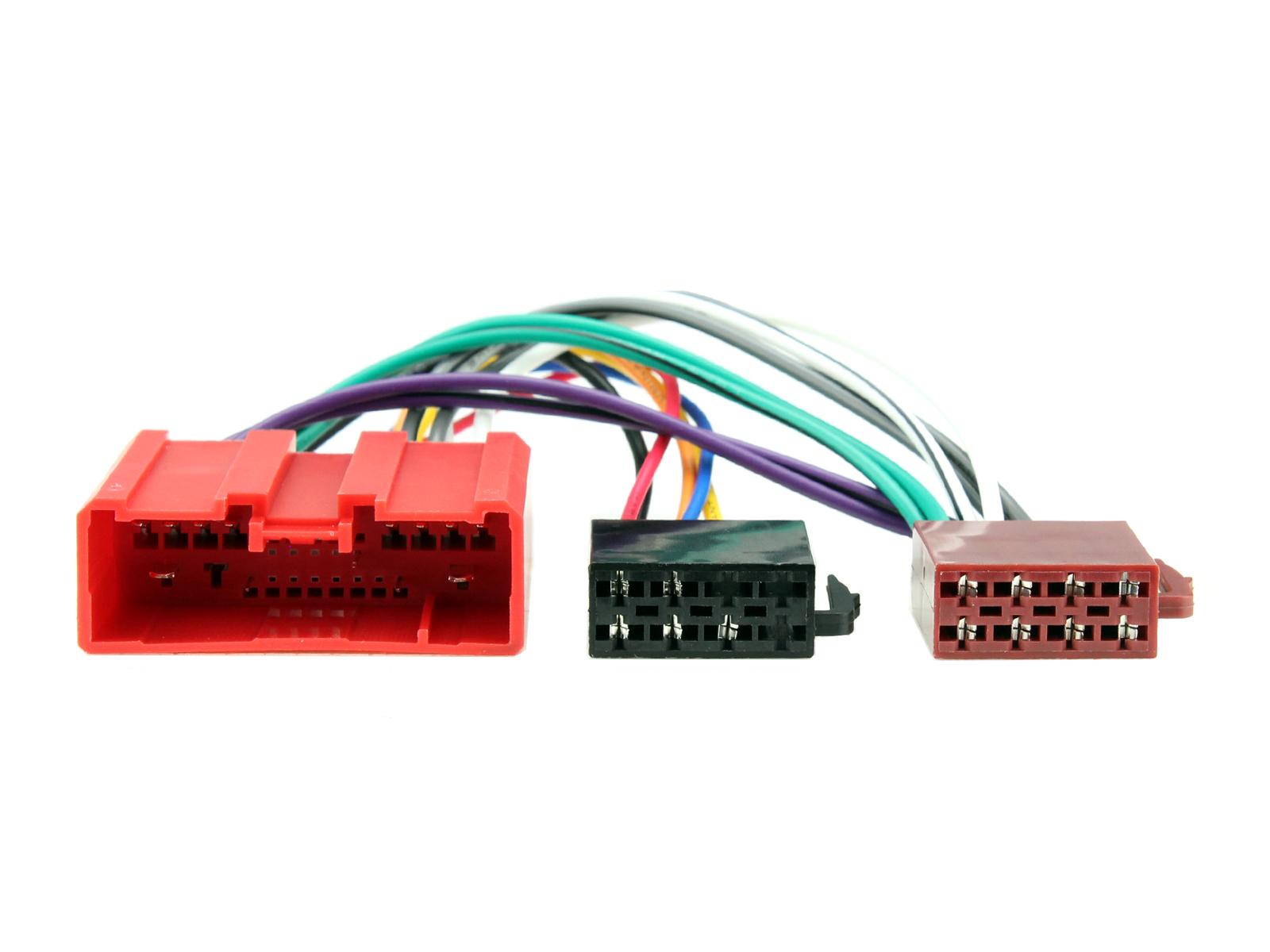 ii. At this point, I checked the Head unit powered up correctly (you need to connect the Sony adaptor to the head unit).

iv.  On the Sony unit, the steering remote controls have to connect to a 3.5mm jack socket.  As you can see on the above diagram, Mazda connect the steering controls through onto the main connector.  Unfortunately, the Mazda ISO adaptor didn't have any connections for this.  I bodged it:

Following the instructions that came with the fascia.  The only challenging part was that the ‘wings’ for mounting the radio were far too thick to accommodate the short screws that came with the radio.  I went to a hardware store and bought some longer screws, but I had to cut them down to prevent them penetrating too far into the head unit and affecting the electronics.

You have to swap the A/C controls over to the new fascia, too.  4 screws.

Note: I wouldn’t actually recommend this fascia, as the plastic is fairly poor quality and doesn’t quite match the rest of the dash.  I’m not sure if there are better ones out there.

Nothing tricky here, but do make sure that the window controls are connected and working before you screw the console down (they have a small connector which seems to come out very easily).

Although, I should note that now it’s proven to work, I will probably now replace the terminal block with some proper connectors (crimp, or other).

I hope this is useful to someone!

I should also add, the Sony head unit I chose actually isn’t really bright enough to use on a sunny day with the top down!  Jury’s out on how usable it is.

That’ll teach me… spent ages looking at all the specs and choosing a unit which was very tidy-looking… but somehow forgot my car was a convertible.

Great write up, but I really can’t understand why you didn’t just use the connects2 adapter for the Bose amp, apart from saving a few £’s, it’s literally “plug n play”. The adapter has passive components so I would be amazed if any difference could be heard with the audio, especially in such a harsh environment as a convertible sports car

Great write up, but I really can’t understand why you didn’t just use the connects2 adapter for the Bose amp, apart from saving a few £’s, it’s literally “plug n play”. The adapter has passive components so I would be amazed if any difference could be heard with the audio, especially in such a harsh environment as a convertible sports car

That was my thinking too! Respect to OP for being able to do this work, it’s beyond my capabilities  but the PnP connectors did the job in no time, only thing now though, my Bose amp has given up on me

Great write up! I’m not sure why you removed the centre console as it’s not required on the NC1, maybe it is on the NC2

With the connects 2 adaptor in place it goes:

direct from the pre outs:

Great write up! I’m not sure why you removed the centre console as it’s not required on the NC1, maybe it is on the NC2

With the connects 2 adaptor in place it goes:

direct from the pre outs:

I might not be able to tell the difference with my ears but I’d feel better doing it properly, Knowing it could be done better and not doing so would bug me

I’ll be trying this next weekend.

It has wireless CarPlay, four pre-outs (I have bose) and comes with a loom terminated at one end with pins at other end to terminate into a Mazda / Din adapter which I’ve also ordered.

A connects2 fascia adapter, and a set of phono cables to butcher.

As my head unit comes with wires off the main loom, I should be able to hack at the Mazda to din cable for the amp power, steering controls etc etc.

I’ll then do as you did and use some kind of terminal block or crimps to get the Phonos out to the power amplifier. 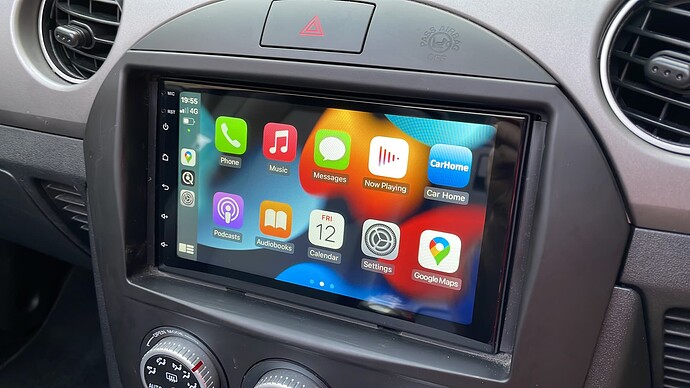 So this guide was super helpful and I fell into a few of the same pitfalls as you. Not helped by the fact the head unit (random Amazon thing) didn’t quite conform to double din standards.

But a little hacking of the fascia adapter and some finessing and it’s in.

I got this one on a random deal on Amazon for £150 and frankly, for the money it is superb.

Has four pre-outs, illumination switching, speed cable input, and utterly flawless CarPlay. It feels like an OEM head unit in its smoothness of operation.

Still to sort steering controls, but waiting on the breadboard cables so I can add the needed pins!