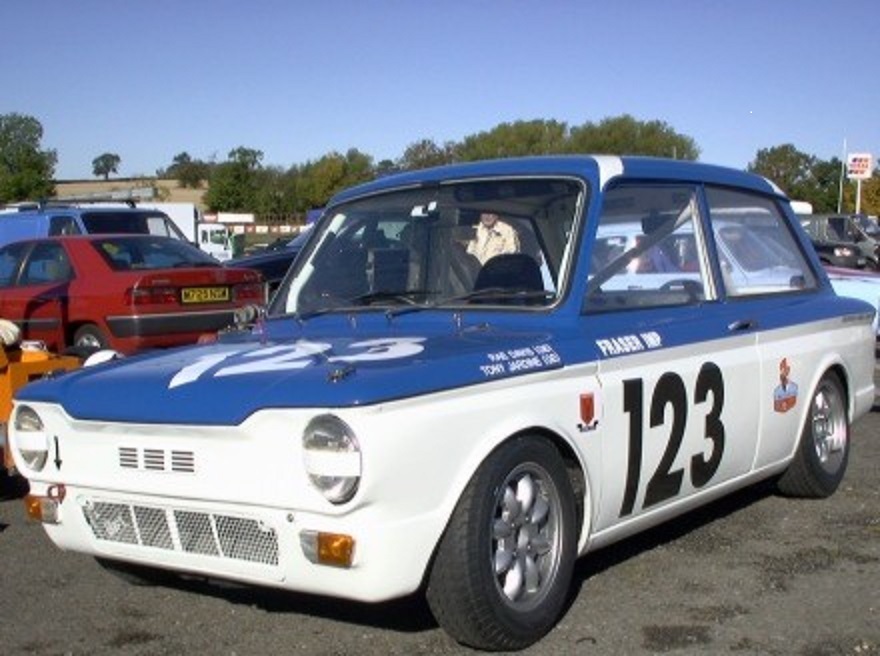 Highly successful in the 60s/70s. Spectacularly lifting the near side front wheel at
Bottom Bend at Brands. Mixed category racing in those days, Imps out cornering
V8 Mustangs only to be blown away on the straights!
I kept my go faster '64 Imp re-sprayed BMW Orange until it sadly rusted away in '78… 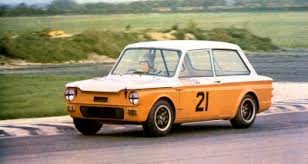 An excellent example of restoration - Chamois Sport in green. 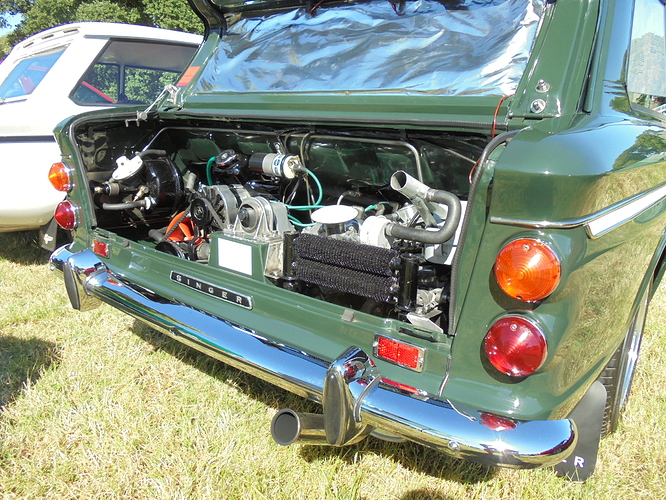 I remember my cousin had a white Imp as his first car. He needed a new rear window and I remember going to the breakers with him to get one (there were a lot around at the time). He ideally wanted the ignition key to fit the “new” rear window to save him swapping the locks. He tried his key in about 5 different windows and it opened every single one!! Was very funny, but meant that the security was dire…

Yes, I remember them well. Not just Brands. Pic shows Ray Calcutt lifting inside front wheel coming out of the (old) hairpin at Snetterton in April 1966. Second pic shows Nick Brittain at same meeting - his engine blew at full chat on the Norwich Straight (in those days just about the fastest piece track in the country) as he chased the likes of Jim Clark in his works L/Cortina and Jack Brabham in his mighty Ford Galaxy. Never seen such a big cloud of smoke. 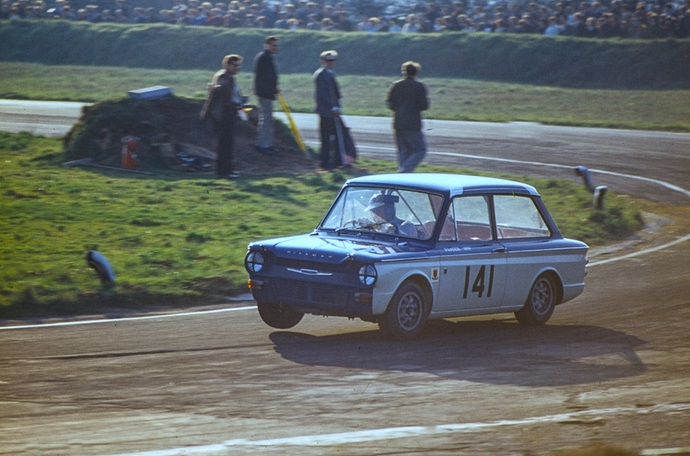 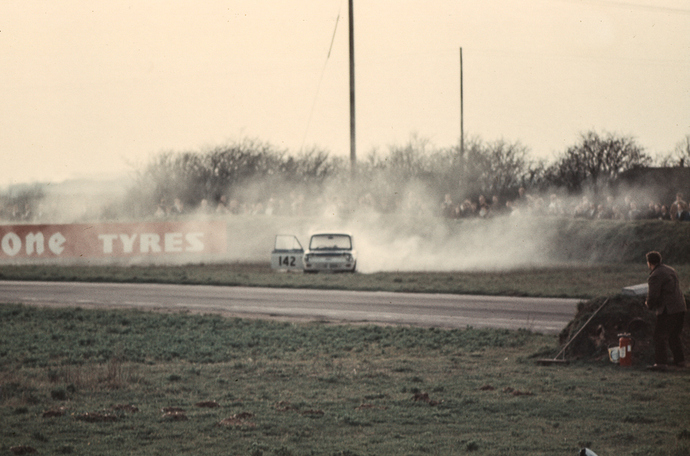 I had a '66 Mini 850 as my first car, I could unlock and start a colleagues Cooper S with my key which wound him up no end. Vehicle security was very poor in those days.

I recall my brother’s Sunbeam (?) Stiletto in the late 60’s…complete with epic front positive camber. Thanks to his belief in his skills which over took his abilities, I also recall the rear over taking the front. More than once. Eventually I refused to get in it after he almost stripped the bark off an oak tree. He was not happy, but a few weeks later he killed a guy driving a Corsair when the admittedly drunk chap wandered into the road. Had the Corsair not being doing 60-odd in a 30 limit…suffice to say said brother came within one inch of The Pokey.

I never went to Snetterton, in fact it is about the only UK track I have yet to visit;
2021 maybe?
Great picture of the inside wheel lifting when cornering.
The other Fraser Imp drivers were Bernard Unett & Tony Lanfranchi.
Roger Nathan, Paul Emery, privateers, were also successful Imp drivers.
8200 rpm was about the upper limit for the 998 cc Imps. If memory is correct
the engine capacity was raised to 1140 cc plus a 5th gear in an attempt to keep the revs down or speed up on long straights…
Even so the 998 cc Imps held their own against 1275 cc Minis.

I recall my brother’s Sunbeam (?) Stiletto in the late 60’s…complete with epic front positive camber. Thanks to his belief in his skills which over took his abilities, I also recall the rear over taking the front. More than once. Eventually I refused to get in it after he almost stripped the bark off an oak tree. He was not happy, but a few weeks later he killed a guy driving a Corsair when the admittedly drunk chap wandered into the road. Had the Corsair not being doing 60-odd in a 30 limit…suffice to say said brother came within one inch of The Pokey.

The first modification to any Imp was to get rid of the dreaded positive camber…
which was supposed to stop shopping Imps over steering!!

Looking back on them after a half century though…they are corking wee things. 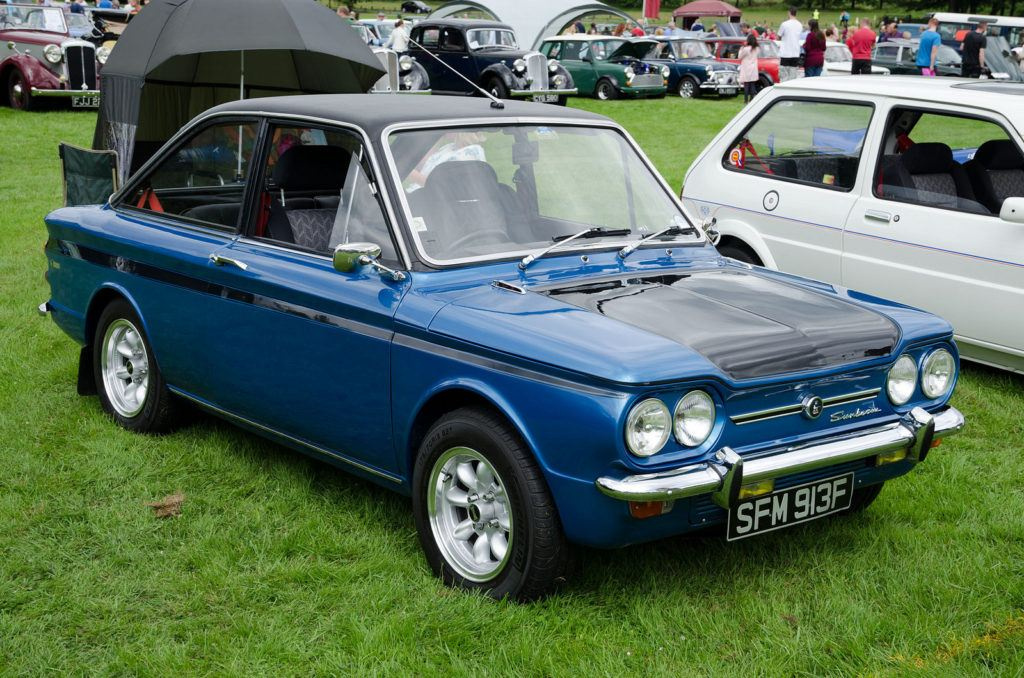 My best mate’s Mum had a brand new Imp, a Singer Chamois Sport no less. It ate numerous cylinder heads and gearboxes in the first year under warranty! (Not his driving, hers…) It was great while it worked.

Vehicle security was very poor in those days.

One dark night in Teddington I unlocked four dark coloured Corsairs parked in a row before I found one without a smell of ciggy smoke, my bitsa.

The first two times someone tried to steal it they obviously could not manage the competition clutch; less than 1/4" between On and Off in more than 3" of pedal travel, and car moved only a couple of car lengths.
The third time it was stolen the tank was empty with a locked fuel cap and so they abandoned it quarter of a mile away after stealing the rather good Aiwa hifi.
The fourth time they cut through the KrookLock, but then the clutch obviously defeated them again (judging by the dents in the bumpers of the cars parked behind and in front).

An Uncle of mine had a maroon Singer Chamois which was immaculate and very well looked after. I remember looking under the bonnet and there was a selection of Bricks in the bottom which he told me improved the handling no end.

Is it true their engines were developed form a Coventry Climax fire appliance?
Seem to recall that dit.

Found it at last, a photo of the Orange Imp. Not to the performance of the Fraser Imps
even though it had a 998 cc engine. In fact we found a rolled Rallye Imp stripped out
every thing possible & transplanted it into my Imp’s '64 body, which was initially blue.
Sold the 875 cc engine & transaxle plus other bits & pieces, no Ebay then!
The Rallye Imps were of course built to with stand the rigours of rallying. The only memorable change; we sold the twin Stromberg carbs & fitted twin Webers.
Once set up the Webers stayed in tune.
No idea of the BHP, the Rally camshaft was created to give as much torque as possible, it certainly went well.
Moreover I am still alive to recall much of the FUN of the '60/70’s

A more professional modification, move the radiator to the front boot, the water pipes ran through the inside of the car, great in the winter but a bit hot in the summer. Of course an upgraded water pump etc etc etc.

I had a normal imp for a while, it was a dreadful thing. I used to leave it unlocked hoping somebody would steal it but they never did. I sold it to some unsuspecting mug & got a holbay hunter instead.

The other thing I remember from those days (when F1 drivers let their hair down and raced for fun in these support races) was watching the “body language” of the different cars. Jack Brabham in the monstrous Galaxie would come hurtling along the Norwich Straight but had to start braking for the hairpin much earlier than Jim Clark in the L/Cortina. You could see the nose of the Galaxie dip under braking, Clark meanwhile still going flat out and gaining. The Minis, left far behind on the straight, would close up by leaving their braking much much later still and the Imps were the same. On some bends on some circuits, the John Rhodes’ of this world simply threw the “S” sideways to scrub off a bit of speed and hardly slowed at all. Then ‘one make racing’ came along and spoiled things, followed by ‘spec’ engines to close everyone up. Different times.

I remember similar things happening at Castle Coombe in the late 60s / early 70s. The Jags (E-Types and Mk.2s), and the Mustangs would fly down the straights, but couldn’t corner, and the Lotus Cortinas and Mini Coopers would catch them up and pass them going around the bends - great fun !

In the 70s, I used to go to Thruxton a lot. The sight of Gerry Marshall blasting round in his Dealer Team Vauxhall Firenzas and the like was a joy to behold. For a big guy, boy was he quick !

I had a Sunbeam Imp Sport in 1971.
It had Hartwell front suspension and Avon Wide Safety tyres. The Hartwell suspension was basically short springs to give negative camber and check straps to stop them popping out of place when yumping…
It was amazing fun but very fragile and overheated a lot.
It needed 18 psi in the front and 30 in the back to be balanced. I had some new tyres fitted to one end, can’t remember which and it was almost undriveable with terminal oversteer. The cure was to swap ends and it was fine.
Had to get rid when blue smoke started to appear. Part exchanged it for a brand new Renault 5.

When I was working at one stage we used contract hire imp vans. They were fun to drive at any more than 60mph the used to wander on the road rather alarmingly. They were also very unreliable I remember one weekend we had the 3 we used and 4 replacements broken down parked outside the building

My first road drive (17th birthday) was in a friend’s Singer Chamois. I could already physically drive because I’d learned on a Fergie tractor and in an old Austin van, in a farmer’s field.

We spent many hours keeping the Chamois roadworthy. It finally died after the head gasket went. During dismantling, one of the long bolts holding the head on snapped off in the block, as did the hardened screw extractor put in to try and remove it. It proved impossible to drill it out and it was then beyond economical repair so it went to the scrappy.