Back with a MX5

Hi
Finally back with a 2013 MX5 Sports Graphite after deserting my first MX5 due to horrendous water leaks into the cabin. I sold that, and bought a Renault Clio RS200 which was great, but had a chronic misfire, which nobody seemed able to fix, so I traded that in for a the Mazda as I regretted selling my first even though I got wet feet!

Welcome back, I doubt you’ll be getting wet in a 2013 Graphite.

No it’s to be hoped not. It was a bit more expensive than the last one. Doesn’t have the awful clutch judder that one had either, which is good as well. But it was fun to drive so I could forgive it its faults. Just need to start purchasing some accessories once the bank balance has recovered. 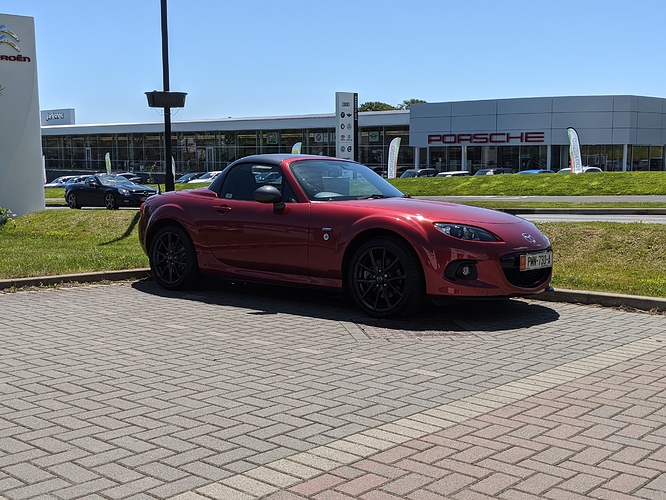 Check the scuttle grommets have been sealed to avoid water leaks on this one. Nice looking car and colour.

Which grommets are these? are they in the engine bay or inside the cover below the windscreen wipers?

Under the cover below the wipers👍

The small black oval caps either side on that cover can be eased out (take care they could be brittle and the nibs break) and under there are the screws to hold the cover on. It’s the part where these screws locate that are the referred to grommets.
Remove the black cover once the screws are out, you’ll need to go under the bonnet and release the black rubber strip holding the length of cover on, it’s on small clips.
You’ll then see the two grommets, it’s at these points you may get leaks into the cabin when it rains etc. Most would apply silicone around them after cleaning the area. You can of course replace them (Mx5parts have them and the mentioned cover caps too) but I would also silicone around new ones too.
Before doing this job remove both wiper arms.
If you have no leaks at present it’s always worth running some sealant around them, they will eventually leak judging by the number of reported leaks by members on the NC model.

Right, thank you very much for explaining that, much appreciated. I will get some sealer on the week and get that sorted. Might order some of the caps before hand just in case. Thanks again

There is a guide in the download section with photos to help do the job, as a club member you have access to it.
Here is the link: - https://mx5oc.co.uk/download/water-ingress-nc-mk3-pdf/

That’s excellent, thank you, between the 2 I should be able to sort it. Prevention is better than cure and all that.

Welcome back , no matter what you drive after a 5 you always come back