Hi there. I could do with a bit of clarification / help. I have a beautiful yellow Y reg Mark 2. I am only the second owner and it has only 56k and it has a full Mazda service history. What a gem! I am confused: is it a “California Edition” (it has “California Edition” car mats) and is it one of a number of the limited edition? Or is it an “Arizona” Edition? Grateful for any steer on this! 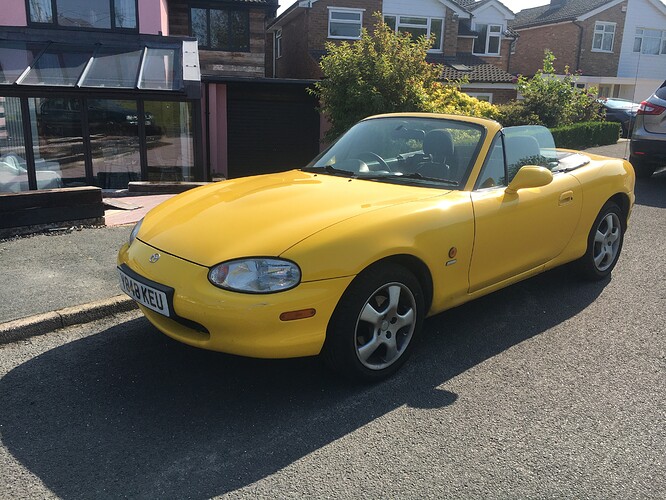 It should also say on the VIN plate - as that is where it states if it is a special edition, just to check…

it won’t as they were done by Mazda UK. It’s a California. Arizona was a NBFL (Mk2.5) and a different colour

Thank you for your help everyone. So it is a California but not a limited edition? Correct?

The recent letters in STHT are a bit miseading. The stiickers on the door jam on post 1991 JDM cars includes “Special Edition”, but its a bit random on JDM cars whether this is filled out or not.

JDM sticker, fairly standard. This is telling me its a white (PT) Mk1 1.8 Eunos Roadster (NA8), with a black cloth interior with matching black dash and door panels (STA, NA3). It has standard Showa suspenson. Under “Grade”, "SP tells me this is a S-Package, which roughly approximates the 1.8iS UK model. Some might say this car doesn’t have aircon, but I know it will, as I have yet to see any Roadster withut Aircon. 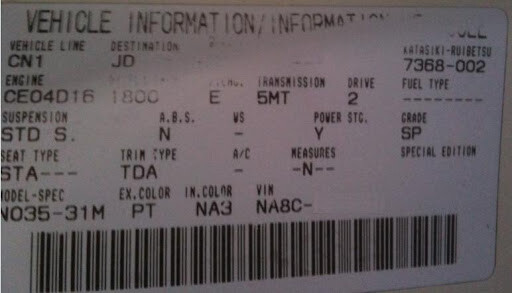 This one is a rarity; rarity in that Mazda actually filled in something under “Limited Edition”, “LTD-G” (or G-LImited) 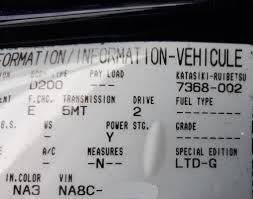 Now we move onto a late car, probably an early 1996 card, judging from the VIN. I know its a montego blue car (M8) with a black interior. It has (obviously) Bilstein suspension. Now I know this car is a S-Special II, but Mazda left the Grade blank And guess what, anther Roadster that doesn’t have aircon, but which actually does. 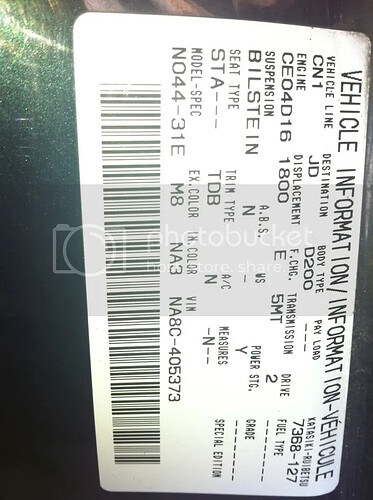 Here is a RS-Limited. Most consider this to be a rare and desirable special edition. Not so Mazda, who decided “RS Limited” is just a grade (regular trim level) even though it wasnt (STE= Recaros) 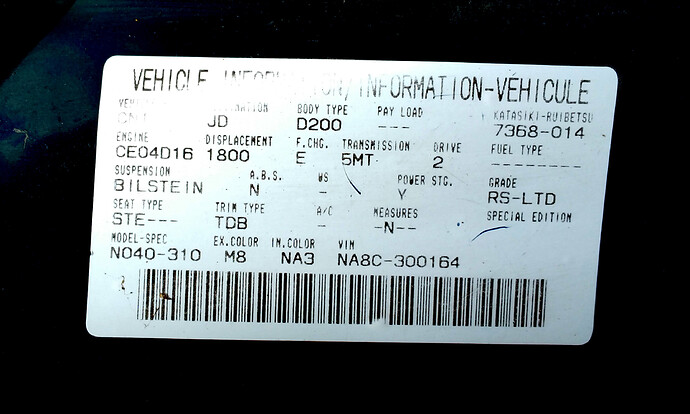 And finally, this is the sticker from a M2-1002 (I used to own). As far as being a special or limited edition, this ought to tick all the boxes. They only made 100 of them, all hand made by M2-Inc, Mazda’s thinktank. The 5N Brave Blue Mica paint was also used on the M2-1002, which was limited to 300, all sold by lottery. It had a unique interior; NM2 refers to ivory leather seats, with a matching leather and alcantera trimmed dashboard, ivory leather door cars, and deep pile cream wool carpets. 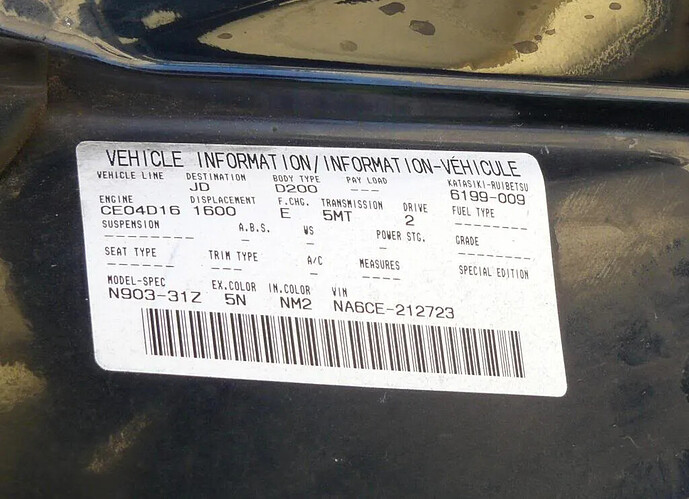 Thank you for your help everyone. So it is a California but not a limited edition? Correct?

Its a limited edition, insomuch as Mazda only sold a limited number of these in the UK.

Yellow Mk2s were limited editions in all markets in which they were sold. It was never a regular production colour. MCL, the UK importer, put their own spin on it to produce a limited editions unique to the UK (though in truth, only minor differences from other yellow cars sold at the same time elsewhere). A yellow car like this was never sold in the US for instance.

The rarest Ltd Eds these days…are the one’s still that were not Ltds’ in the first place!

Thanks a lot for this steer: much appreciated.

500 sold. Not a numbered edition, I don’t think any MK2 editions were numbered.

But that was a proper factory special.

Thank you Richard. So just to double check, the MX-5 I have is likely to be one of 500?

Actually, a yellow MX5 in 2000 was super rare. Yellow was only offered in two markets only; UK and Germany. No one else got that colour. In Germany, they also called it the Californa. Only 500 in Germany, 1000 worldwide, making it one of the rarest Mk2 MX5s about.

Wow that dates it, a price in Euros and Deutsche Marks.

UK got different wheels to germany

Yes, I suspect it might be because the wheels on the UK version were not TUV approved. Its a rare incidence of the factory 15" wheel being fitted to the 1.6 model.

The other differences to be noted are that the German model was fitted with a Nardi steering wheel, and had power windows.