Just wondering if anyone can steer me towards a decent camera for taking videos of some of the roads i will be driving shortly. Possibly use a mount for my iphone with some sort of stabalising software?. Any ideas would be good.tia. Chris.

Can’t really go wrong with GoPro.
Talk to your local stockist about your needs, so they can point you at the most suitable model.

Drift Ghost are pretty good, they have a long lasting battery and also do an option battery that lasts around 8 hours on a charge. They are often used by the Police.

Drift | No matter what moves you, capture it best with Drift

Pioneering cameras accessible to everyone - not just the daredevils - so anyone can share what makes them great.

Thanks for the replies. I have been recommended to try the Ghost X. Quite a bit cheaper than the go-pro too.

Plenty of £50-60 action camera bundles on Amazon and eBay, Chinese specials mind you.

Shop the full Olfi range from camera bundles to chest harnesses. 30-day money back guarantee. Break it, Replace it guarantee. Cameras start from £99.99.

Also look at track Addict a free app for Android and iPhone, can record tracks and drives with GPS telemetry.
Race Render is their editing software, again free.

If you have a screen mount for your iphone you could just use the phone maybe? It has stabilisation too, or if you have an old smartphone in a drawer somewhere, re-purpose that as a dash cam.

Thanks for all the help on this one. I have decided to go for this one from Amazon. I will report back with a review when i get to use it. 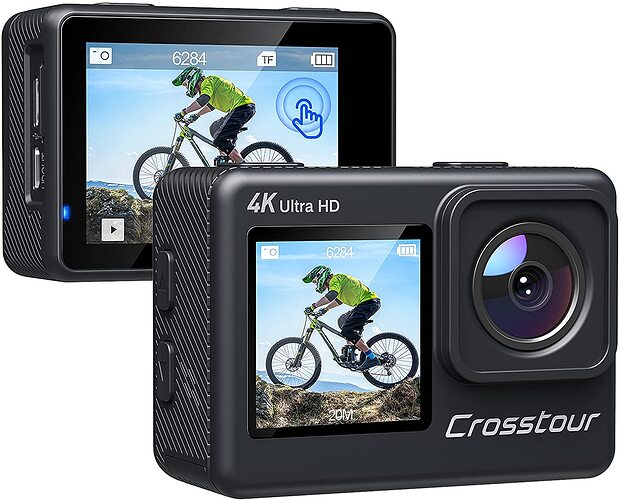 Crosstour Action Camera CT9300 - A vivid front screen lets you frame yourself effortlessly in any setting, while the back screen delivers a crystal-clear, hyper-responsive display. This durable, versatile action camera is...

Hmm, lots about that will do most of what you want, but look at the features.

Key feature for me was an adjustable polarising filter to eliminate reflections off the inside of the windscreen, and this coupled with very low-noise night vision usually means a good camera. It also eliminated maybe 90% of cameras.

There is also a trade-off between how many of the pixels you use and noise. If you run 4K (3840 pixels per line) then the noise from each pixel will be more evident on a 4K display, but if you run 2K (ie normal HD at 1920 pixels per line) then pixels are paired up two ways vertical and horizontal for a big reduction in noise levels (four sensor pixels averaged to make one output image pixel).
So for best overall results from a GOOD camera with P-filter use 2K at night and 4K on a bright sunny day. However, the chances are that the small lenses in the cheaper cameras will not give you any better resolution on 4K than they do on 2K.

Then look at the recording bandwidth. Some compress the video a lot and lose quality because they can’t write to the memory chip fast enough. The fastest SUSTAINED write-speed chips in a GOOD camera will happily do 4K video on low compression for highest quality until the chip is full and then wrap around, other cameras may struggle and stutter even with a fast chip. I use H2TestW on a good fast PC to speed test each new chip with a fill-the-chip write sequence; lots are nowhere near the claimed speed, but smaller (eg 32GB) are generally a lot faster than bigger (eg 128GB).

The market (availability, quality, price) changes from week to week with these things, and any recommendation for camera or chip now will be obsolete in a month’s time.

Thus, decide what your video priorities are and use these to shortlist the cameras, and the chips.
.
.
.
You wanted Image Stabilisation? Nice to have, but many ‘affordable’ electro-mechanical servo systems mess it up when it really matters, and instead you need pay top money for guaranteed results. I’ve given up on it and use the third option I list below.

The only dash-camera I’ve used with a good internal image stabiliser also allowed digital zoom by using more or less sensor pixels for the same but scaled output; wider angle = lower noise, as one might expect. On testing and comparing frames etc on the highest quality output we think it moved the sensor on a piezo transducer, and did so in between frames according to what was happening on the G-chip, and did not move slow bits in the lens, but this is speculation. However it’s no longer available and was obsolete when I bought it seven years ago. It sits on my desk now as a reminder of how ‘newer’ with extra box-tick features is not always ‘better’ at the basic core functions you need all the time.

The real solution is to try a few from an intelligent shortlist.

Over the last ten years I’ve used two different GoPros and six different dash cams. I currently use my original old bulky GoPro Hero2 for skiing (the smaller less reliable in the cold Gopro6 went back three times before I asked for my money back) and Nextbase 522 for the cars. Both are significant compromises and only optimum for those applications for specific reasons that might not suit other users.

I’ve been ‘trying a few’ in a search for stage mics recently, some dross, some good but insensitive needing extra gain elsewhere - the hunt for a satisfactory system solution on a limited budget for our peculiar situation goes on.

Well most of that went completely above my head(complete novice with technology).Anyway,i couldnt get the camera to connect via bluetooth, it also wouldnt connect by cable,so back it went. I have now bought a small cradle to sit my mobile fone in, hopefully this will do the job.