Can anyone help with mot advisory

I have an mx5 eunos 1.8 1998 Japanese import i need a new rear fog lamp as it is cracked and two front side light plastic fronts as they are fogged up with water the mot put advisory on both these things thank you in advance Alison

Does your car have popup headlights; I suspect so?
I would expect a 1998 manufactured Eunos to be a MK2 style with fixed headlights but the description of your problems appears to be for an earlier MK1 style car.
Assuming that to be the case…

The lugs for the front side lights frequently break off, leaving the fittings loose. There are also rubber seals that go missing. The side light housings also crack with age.

Mine had been fogged for years, never a mention at the MOT. So you probably don’t “need” to replace these (you can try drying them out in a box with silica gel, warming with a hairdryer is frequently fruitless)

New front Mazda replacements are pricey ($80 each). MX5parts sell pattern units for £75 a pair; not quite original appearance, but can update the look.

Various suppliers have used parts. I picked up a pair at the national rally from MX5 Works for £20. They had at least one more pair in good order left.

Foglight is a standard motor factors (Halfords) item, easy to replace. These are usually cheap items, usually not worth repairing, replace for the £10 or so they cost.

Often imports are given an age approximating to when they were imported. So I expect this is a 1993-95 car imported in 1998.

It’s not a part of the light that breaks, it is the lugs on the bulb holders.

The looms are about £26 per side

Rear fog is easy to re place, it will be an aftermarket unit, any pics?, you could have it re routed into the rear cluster and job done,sounds like you have a Mk 2 , the front fogs are bolted in place to the front of the roadster not the nose cone, you can take them apart and re vamp them but will require the removal of the nose cone to do so, there is also some aftermarket units that will fit and are a lot better with being LED units , but that will also require the nose cone off the fit, where are you?
same light units on the Mk 2 and 2.5…
http://www.mazdamenders.net/forum/viewtopic.php?f=133&t=3600

same process for the Nb’s…
http://www.mazdamenders.net/forum/viewtopic.php?f=133&t=6108

Any pics of the front fogs?
M-m

Thank you this is very helpful

You can mount it on a bit of metal so its sticking up from the bumper; some people will cut a hole in the bumper. Many convert the rear reverse light or the boot lamp into a foglight, and that seems to be ok with the MOT.

Thank you Richard this is great I was just worried I wouldn’t be able to get any.

Thank you Rhino this site is great, so much help and thanks for the info on the clutch think I may have been duped a little, never mind we learn by our mistakes. thanks again.

Don’t try to do anything with the front sidelights. I’ve tried everything to stop mine fogging up. Bite the bullet and get new lenses and bulb holders/looms.
Don’t buy second hand, they are all twenty + years old, and will be just as bad a yours are.
I’ve had two Mk1’s, and had to buy new for both.

Thank you where can I get new ones please thanks

Don’t try to do anything with the front sidelights. I’ve tried everything to stop mine fogging up. Bite the bullet and get new lenses and bulb holders/looms.

I have never encountered a failed sidelight unit. From my experience it is always the stub loom sidelight connector that is the issue.

Alison, these parts can all be purchased from MX5Parts or possibly autolink but as already explained, the issue can be resolved without great expense and replacement of the main units.

Thank you where can I get new ones please thanks

There are other copy parts, but a lot of them don’t have a sidelight fitting, so they need to be modified to take a sidelight, so maybe a bit pointless.

Used items are getting thin on the ground now. Some older ones can develop a few fine cracks (like mine did). Condensation inside is going to be due to a damaged bulb holder (though one of mine has a partially melted fitting on the sidelight housing itself) and/or missing/damaged rubber seals/o-rings. I wonder in the original o-rings harden up over the years

Used ones can be had from:
http://www.mx5works.co.uk/; call them, they had at least 2 left, which seemed ok 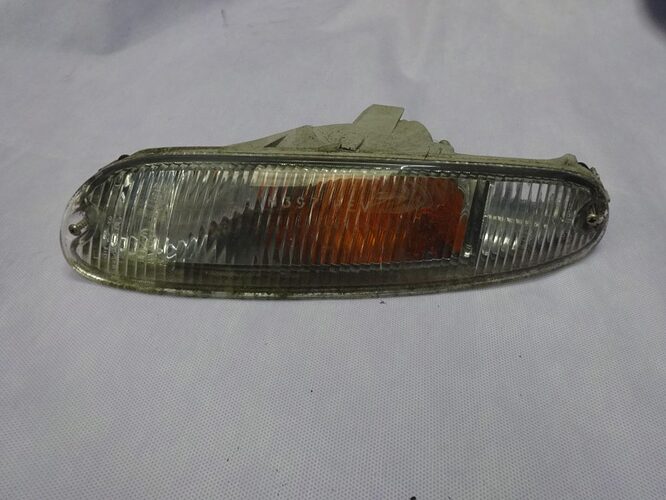 Front Side light and indicator unit - L/H and R/H

I was told it was the bulb holder. I changed them and there was still condensation in the lens. Tried re sealing the lens, still there.
Bought some second hand lenses. Still there.
Bought all new. Never had another issue.
MX5 Parts or Autolink for the parts.

I was told it was the bulb holder. I changed them and there was still condensation in the lens. Tried re sealing the lens, still there.
Bought some second hand lenses. Still there.
Bought all new. Never had another issue.

You bought new sidelight/indicators units and fitted the same bulb holders?
Did you properly dry out the originals before refitting?
Do you still have them; if they are in otherwise very good condition will buy off you to back up my assertion that these do not leak unless physically damaged. A lot have fine cracks visible in the lens but this will not be a cause of water ingress.