Condensation freezing on inside

My NA is parked in a spot that gets little to no sun in the winter. We’ve had a ton of rain lately and the car hasn’t been driven for a week or so.
This morning I have frozen condensation on the roof inside which I’ve not seen before. It’s a relatively new vinyl hood.
I’ve had issues with the rain rail, with water ingress but that had been fixed. No sign of damp under the parcel shelf carpet or footwells (not pulled these back though).
I suspect the sheer volume of rain lately is to blame for general moisture inside which has no chance to evaporate given car is in shade. I don’t have a garage.

Any suggestions for ways to dry it out other than windows open and moisture absorbing silica? 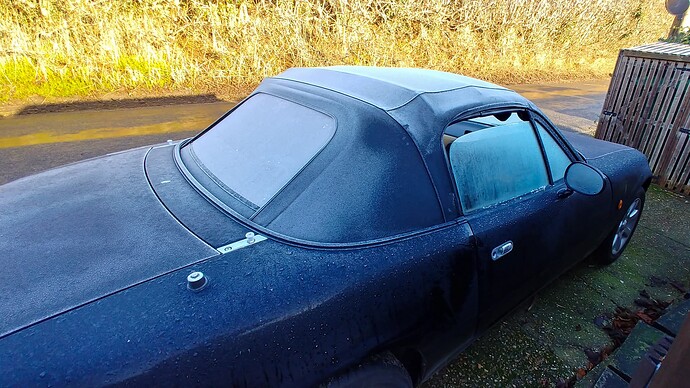 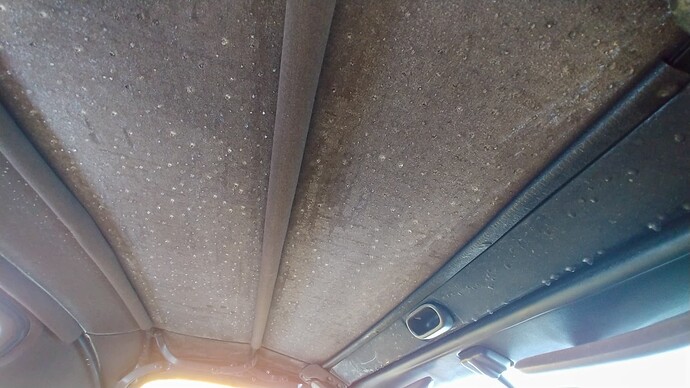 I suggest you try one of those half covers, just to cover the hood.
The cold seems to affect your hood inside much like a house window, cold air outside hitting the glass, warm air inside causing condensation on the glass surface.
Your car must get a built up of higher temperatures during the day hence the dampness when the cold hits it again.
The only way to dry that out is to wipe off any excess and go for a drive heater on, build up some drying conditions in there, basically use the car. Alternatively get it garaged.

My Mk2 has always suffered from condensation in cold weather although it has a hard top. As an experiment this winter I placed a dehumidifier pack on the parcel shelf. It seems to have reduced the amount of condensation forming in the car more efficiently than I’d hoped. It’s one of the simple type with a plastic container with white crystals to absorb moisture, such as intended for wardrobes etc and very cheap to buy. The water container is well over half full after a few weeks.

Long story short, you can reduce the condensate but likely not eliminate it.

Even if you had a perfect MK1 out of the gates by design the water that lands on the soft top drains through the inside of the car.

This isn’t the best video but it shows where the water goes and how the internal drain holes and how they can become blocked: How to unblock the roof drains on a NA or NB Mazda MX5 and Miata - YouTube

It’s likely your drain holes aren’t blocked as you haven’t mentioned any of the other related problems but the design of the roof allows water into the car regardless.

Here are some remedies you can try depending on your situation/budget for a drier MK1:

Cheers, I use a couple of Pingi bags in all 3 of our cars and seems to help but they have their work cut out with the 5, obviously. May try something more heavy duty.

All other convertibles I’ve had have been used daily so I guess it is the lack of regular use with this one that’s exacerbating the issue.

Tip tips, thanks. Have a small radiator in the loft I’ll give that a go when at home! 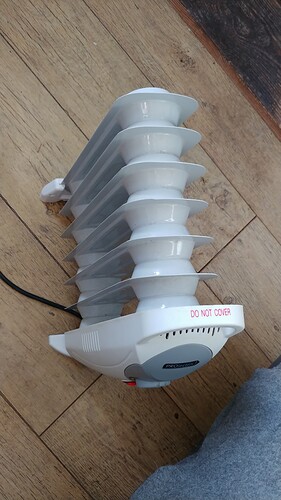 Even if that was a metal roofed car, if it had no head lining, then you would get ice form on the roof. It is not a fault of the car, it is just moisture content of the air and that there is no insulation from the outside. The Dew / Frost point is reached far more easily on the roof that the other internal surfaces and so it is just where the moisture from the air goes.

I do wonder whether you have a leak somewhere? Perhaps due to a small leak the water/moisture inside the car is more than “normal” and as nick explained the water condensates on the colder surface? Then it freezes over when the temperature drops below zero?

There was a leak from the base of the roof where it meets the top of the boot area, but that was fixed by adjusting the rain rail. That was before the latest round of bad weather.
We’ve had a day of sunshine today and I’ve managed to dry everything out as much as possible and air the car. I’ll keep an eye on it over the next few days and hope it’s not more than general condensation and my parking in shade. Fingers crossed.

Just to add a few things from my experience… My MK1 sits on the drive and will be in direct sunlight most of the day (when the sun is actually out!) but still suffers from considerable condensation build up, and mold forming on the steering wheel and sometimes on the inside of the soft top. The condensation can get so bad that full droplets of water form on the roof and on the windscreen, and rear window. This has been the exact same case with using a soft top with and without a half cover, and a hard top with and without a half cover.
I experimented this year by leaving the cover off hoping that during the day with the sun entering the car, it wouldn’t be so bad, but no luck.
Again, aside from heating it, I think the best remedy is to wipe it down every few weeks and give it a drive with the top down or the heaters on.

Yep, airing it as often as possible and a regular blast, coupled with the moisture absorber recommendations will hopefully keep it as dry as possible. We have had some weeks of wet weather too lately so hopefully that will change. Haven’t spotted any mould thankfully.

There is water getting in the roadster to give that much condensation , you need to find where its getting in to be able to solve the condensation , Check the boot , door membranes, drainage trays/tubes and if the flap in the tubes is still in place.
M-m

The good news this morning is that there’s no trace of any condensation anywhere, having dried the car out yesterday.
I suspect the combination of days of heavy rain and wet floor mats from wet shoes was enough to create the issue.

Thanks to everyone who replied.

I get a lot of condensation in my NA. Sudden change from warmish and humid air to cold does it.

It also used to affect my Toyota Granvia camper van, Not a rag top but a pop up fibreglass roof. I took to running a small dehumidifier in it for a few hours. Not much room for one in an MX5 though, although I reckon the one I have could perch on the passenger seat.

My NC Mk3 was soaking wet this morning on the underside of the soft top roof and was dripping on to the seats. I immediately realised it was just condensation having been parked up in freezing weather with a day of clear skies and bright sunshine. Solution? Wipe the inside of the soft top with an e-cloth then take it for a run with the heater on a high setting