Hi all. I am looking for advice on gap insurance. Buying a car for £24,000 so FAO is a no brainer. However I’m stuck deciding who to use. So far I’ve looked at directGap, TotalLossGap and TidyAlloys. Ideally want a 5 year policy. Things I know to look for are:
Return to invoice
Cover if lost with keys
Cover of excess
Length of term
Cost but that’s not the bigger driver.

Anything else to look out for?
Any experience or recommendations?

Hi Tia
I looked into this when I bought my 30AE on pcp
I was worried that if the worst happened, that I would still have to make the monthly payments on potentially, a wreck
When I insured it, with Saga, the policy included ‘new for old’ on total loss for first 2 years
This put my mind at rest
Didn’t bother with gap
Decent gap aint cheap and only covers (as name suggests) the portion of difference between what insurance will pay and replacement
Hope this helps!
Steve

It’s not new it’s a used car I’m buying so no new for old option on insurance. Gap is a must, a 4 year return to invoice policy is £237. It’s not an MX5 (I do have a 66 plate MX5) it’s a BMW M140i. They are high risk for TWOC so I’d be very nervous without gap. If it walked in 4 years I could be paid £15,000 by my standard insurance, less £500 excess. Gap would pay me the other £9,000 and cover my excess. For £60 a year I think it’s bargain of the century. I just want to know I’m choosing a reputable company who will pay out fairly. Finance payments will be no problem I am paying cash for the car. I always buy cars cash I don’t do finance apart from a mortgage.

Never had GAP insurance, always looked a bad deal when I read the small print. But reading this:

I seem to be in the minority. I always thought it was just the gap between finance value and market value that was covered, but a Return To Invoice insurance for £60 a year does sound very tempting.

The vast majority of M140s that get stolen seem to be taken from the owners home, often with keyless ‘Comfort Access’, or more worryingly through forced entry to the home to steal the keys. Read up on lots of useful info on babybmw.net/forum and I look forward to seeing you on there.

Good to see I’m not the only one who has good taste lol. I have a Jaguar XFR, had it from new and took dealer GAP but they did it cheap so I just agreed. I also have my MX5 and am getting the M140 Thursday. No gap on the MX5 it was a low value used purchase (got a 30,000 mile mint 66 plate with a new factory fitted roof and roll hoops fitted the month before I took it for £10,450 because that was what the guy was offered as a part exchange), but the M140 stands more of a chance of being stolen, I won’t let that put me off having what I want tho. I still think I’ll drive the Mazda 90% of the time if I’m honest. It’s soooooo nice to drive.

A chap at work had a Civic typeR stolen about 6 years ago, taken from his drive with keys taken from his house. He paid around £30,000 for it from memory when new, after 3 years when it went his insurance paid him around £14,000 and his gap simply paid him the remaining £16,000 no problem so he had a full £30,000 in his bank again. He has left now so I can’t ask who he used.

So now I am looking at paying £237 for a 5 year policy, return to invoice, excess covered up to £500, and they state that so long as your own insurance pay out then so will they. They get good reviews online but I don’t always trust those reviews. Better to ask on a site like this imho.

So as far as I can see anyone who doesn’t take gap insurance needs their head looking at. It’s like saying it don’t want to pay £47 a YEAR to guarantee I get that extra £16,000 in the event of a claim. How is that a credible thought process??

I have always used ALA, competitive rates and although I’ve never had to use them they seem to have a pretty good reputation. If you go through Money Saving Expert there is often a discount code.

So as far as I can see anyone who doesn’t take gap insurance needs their head looking at. It’s like saying it don’t want to pay £47 a YEAR to guarantee I get that extra £16,000 in the event of a claim. How is that a credible thought process??

I agree, but I had never heard of a ‘return to invoice’ policy until this morning. If it covers more than theft (I. E. Fire and fault/non-fault accident) that would be truly spectacular value. Very easy to do write off levels of damage to a 340hp rearwheel drive car.

I would check the insurers are OK with mods, the standard suspension on the 140 is lacking, easily fixed with Bilsteins for about £800 fitted, and an LSD is almost a ‘must have’ upgrade, which will set you back another £2200 for BMW to supply and fit. 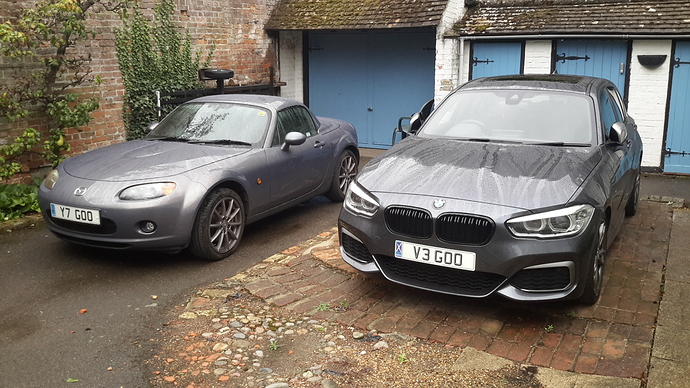 Which one to drive today… Happy 1st world problem.

That’s the same colour M140. Grey with with black alloys and the M plus pack, pro nav, shadow edition. Lovely looking.
We went out in a 435d first and liked it a lot. Jumped out straight into the m140, the second the engine fired it was sold. The smooth silky engine is a delight. And the exhaust note, especially on over run in eco plus

. Made
The 435D engine sound like a bag of old spanners. And the 435D exhaust note was none existent as with all oil burners.

I’ve just paid for the gap from ‘total loss gap’ now. Was £237 for 5 years with £250 excess cover included. It covers all named drivers, theft with or without keys, total loss write offs, is transferable to new cars free of charge if you sell up (total value must be like for like within reason, ie their risk) and they guarantee to pay out as long as your insurance have paid out.

I like the idea of doing something to the rear end to stop it feeling a bit soft going hard into a corner, I noticed it straight away, I read online it’s an easy job to fit 4series arms or something to dial that out. It’s only when you dial it up to 11 tho from what I can tell. Don’t think I’d do anything else tbh.

Funny, I was looking to buy a 435d convertible to replace my 3 series convertible when I went out in the 140. Decided life was too short not to have one, could always sell it if it didn’t work out. The B58 engine is a peach.

The m4 lower control arms give you more negative camber on the front (non adjustable). I have not gone that route as it was a step to far turning my daily driver into a track car. That said, I have done eight or ten track days in it, including Spa last year. The M140 is a real eye opener for the uninitiated. …

Bilston B12 are the go to must do upgrade, but now I wear a Mazda hat I am wondering what a set of Meister R with adjustable camber plates would be like…

Anyhow. … enjoy your new motor, and join up to the babybmw forum, lot of sensible people on there, unlike the Facebook group who seem to keep there brains in jars at the side of the bed going by the 'conversations ’ on there.

That’s why I’m not on Facebook. Full of clowns

Just to let you know that we offer a 12 month product called Total Loss Protection. Whilst it’s not exactly the same as your traditional GAP insurance we feel for some customers it can make a cost effective alternative.

Please feel free to take a look if you wish.

Very easy to deal with and you can transfer any unused premium to a new policy if you subsequently decide to change your car. Depending on the age of the vehicle, they also offer an option to extend the policy at the end of the original term.

I used GAPinsurance.co.uk on my Golf as they were well reviewed on another forum.
Was good value for return to invoice, I never had to claim and it’s now expired.
Also got a policy from them for my daughter last year, I found them easy to contact and responsive when setting up on both occasions, both telephone and email.
I cannot comment about making a claim though, fortunately.
Stewart