Thanks for letting me join.

I’m Steve, 44, and I live near Leighton Buzzard in South Bedfordshire.

I’ve owned 39 cars and I’m looking to add an MX5 to make it 40. I’m a car enthusiast.
I’ve not owned an MX5 previously and have always thought about getting one.
Budget will be approx. £2k so I’ll be looking at a 1.8 NB.

I’m also a biker and own a modified '13 Honda CB1100 and a '66 CBR300R (the commuter) and I’m a serious cyclist and own 3 road/race bikes so space in my garage always has to be well thought out.

I know most of the stuff to look for with MX5’s as well as general car bits anyway.
My wife doesn’t want me to buy an MX5 but she isn’t really into cars.

My concerns when looking will be the usual rust and I feel like I could be hunting around for a while to find a decent one.
I’d rather buy from an enthusiast who knows their car but I know I can’t be too picky. Just as long as I find one that’s been well cared for, I’ll be happy.

Also in Leighton Buzzard. Buying from an enthusiast is not a guarantee of rust-free status (my remaining MX5 has a history of rust). Your best prospects, in lieu of spending most weekends tyre kicking, is to buy a freshly imported car, either one already here, or work with an importer. You probably have to double your budget. A £2000 rust free car is possible, but you have to put the hours/miles in to find one.

My budget is strict because I want some in reserve for future repairs.
I don’t mind taking my time as I can whizz around on my bike going to look at some.

Did you / have you used the local company MX5 works? I know they’ve recently moved to Stewkley Road in Soulbury.

I’ve been there a few times. I personally would not use them for routine servicing and repairs. Others will have a different view.

Thanks for your opinion.
I would do my own routine servicing eg oil changes, brakes and just leave the complex stuff to the pro’s.

Would you prefer to use the MX5 restorer in Pevensey or can you recommend another specialist?

For restoration, I have used Thrussington Garage in East Goscote, Leics, a MX5 Specialist (runs a race team, in Mk1s and Mk3s). Mainly the original reason was convenience, but Mike is an excellent mechanic.

One of is basket case restorations was covered by Motorpunk:

The restoration of one of the oldest MX-5s around • MotorPunk

Welcome to what might be a long (but hopefully entertaining) read. Nine years ago I made a drunken bid on EBay and accidentally ended up with a Mk1 Mazda MX-5. I wanted an MR2. I’m glad I got it wrong. G633 NNH was bought with the sole intention of...

He also has his own solution for Mk2 chassis leg corrosion. From time to time, he has sold cars on behalf of customers.

Another place is Sam Goodwin in Nuneaton, who does sell used MX5s

Mention me to either (Andy), as they know me.

Thanks Andy.
I’ve been looking at the links you previously sent me too.

Goodwood Sports cars have a nice mk2 in red for only £2150 so I think I might buy one from them as this will save me the time and hassle of driving around and wasting time.

Glad I joined the forum as it’s always the best source of great info.

Would be good to come and have a nose of your car if you are happy with that. I can buy you a pint as a thanks for your help.

It looks an honest car, good MOT history, and the owner obviously never let the sills get so shabby that they were falling off (strong correlation in my view with the standard of maintenance). I prefer the looks of the NB over the later NB-FL, especially in a solid colour like red. It will have less power than the later VVT engine, but maybe less to go wrong wit the VICS engine. Obviously the sills look well repaired, but you don’t really know what is going on underneath the paint. I would request the seller to provide good photos of the chassis legs, and then be prepared to act fairly quickly to secure it, if it checks out otherwise. You are obviously realistic in expectations, its over 20 years old. The early Mk2s used to suffer wear to the backs of the seats, and surface corrosion where the bootlid contacted the bodywork; no big deal. The seals on the roof glass could sometimes look a bit messed up (took a little while I think for Mazda to perfect the seal for the Mk2). But if it is on the original roof still, there won’t be much left in it. Some of the early 1.8 MK2s could burn oil; sticking oil rings. Its manageable to an extent (check the oil level), and doesn’t affect how the car drives. But I’ve not heard of anyone successfully freeing things up, without replacing or rebuilding the engine. My 1.8 Mk1 went this way at 200k kms, but others have gone on much longer, so it varies, if it happens at all. Broken rear spring is fairly common; if done properly, both springs would have been replaced.

No need for the pint, and when I dig the old car out, you are more than welcome to have a look around. 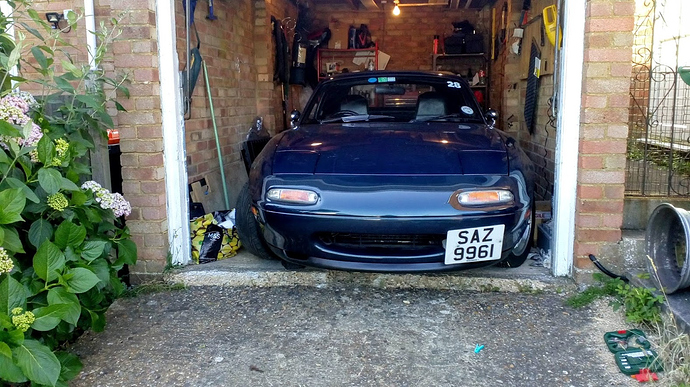 Currently looking forlorn after not shifting since November, and covered in cement dust (new drive). 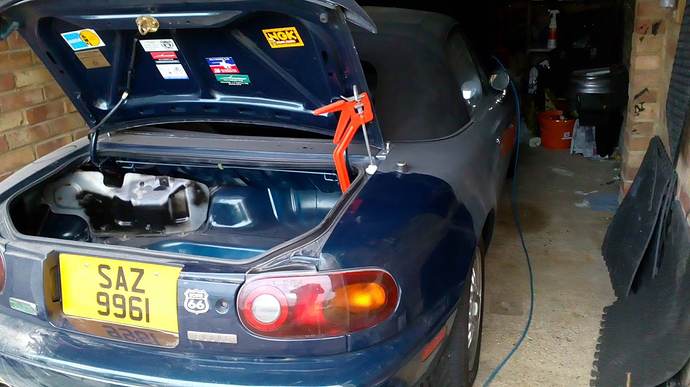 I’m sure I’ve seen your car around in the past.
I’m in Hockliffe to be exact.

I’ve just emailed Steve @ Goodwood Sportscars. Looks like the guy really knows his stuff.
Just got to sell my car (already for sale) and I’m good to go.

Do you got to any meets/events? We have some great roads and scenery around us. Only today I took out both my motorbikes for a ride. Love cycling around here too and over into the villages/towns around the Aylesbury Vale.

Tend to go to national events, not the regional events. When I can, I’ll take the car on an occasional random drive for the hell of it. Made a resolution this year to use it more this year. I’ve had it since 2005, more or less the time I have been in Leighton Buzzard. So far breaking that resolution.

Wow, that is some mileage/history!

Testament to the fact that a well maintained engine will run forever!

Do you go to any of the pubs in town Andy?
My wife and I used to go to the Bald Buzzard quite a bit or the Black Lion.
I’ve cut right down on my alcohol intake since last year as it’s that much harder for me to get to my optimum weight/performance for my cycling now that I’m getting older.
However, we’ll occasionally pop into town and visit one of those pubs.

Might need to get a bike rack for the MX5 in the future. I’ve seen plenty around in the past.

Not really a pub goer.

I wish it was the same engine, but the original was replaced at 200k kms (kms not miles!) by an engine that came out of Evo magazine’s RS Limited, because it started to use vast quantities of oil. Probably got about 120k kms on the present motor. But only 4k kms since 2016 (lack of use).

The highest mileage I know on these engines, without rebuilds, is 400k miles+

I had a Halfords rack that worked for bikes, but threw it out.

I’ve just a deposit down on a Red mk2 which Steve at Goodwood Sportscars was selling.

I had a good read up on his website and about the car. MOT history good too and I think it was off the road for a number of years between 2006-12.

Anyway, we’ll see. Deposit is refundable if I am not happy.

Good luck with that. Front bumper looks a bit pink, but to be expected of red. Red is one of those colours that photographs really well.

But all in all, once you get past the basic solidity of the car, like the Mk1, there isn’t that much to check on these cars, as they are quite simple.

Meanwhile, another weekend will go by with my MX5 stuck in the garage. My other car, a XJ8, is now giving me a low coolant warning…

Thank you for those check points Andy, very useful indeed.

Steve and I had a good chat about the car and he assures me the front chassis rails are spot on and he has said the suspension components are all pretty good. He’s going to coat them in Dynax.
He’s advise there are no oil leaks but I know these things can happen at any time anyway so I’ll just have to keep an eye on things.
Apparently, the previous owner was an ex Aston Martin engineer. However, I think the car has clearly been looked after and had preventative maintenance during it’s life which is great. I’m like that too.

I always budget for service items when buying a used car so I’ll buy a service kit from MX5 Parts.

I also noticed in the engine bay pic that the expansion tank has pink coolant so it might be best for me to drain, flush and refill with ethylene-glycol coolant and de-ionised water.

You must have deep pockets to run the Jag.