How To Get At That Failed NC1 Door Actuator

It’s been asked many times so whilst fresh in my mind I thought I’d put the pics up from when I had my door card off to replace the actuator.

Now it’s been asked many times, “why has my door stopped locking or unlocking?” and it’s proved mainly the door actuator has failed, getting a common problem on the NC’s now.

This “how to” I must add refers to the NC1 first generation, the door card will differ on the facelift models but basically they will be similar behind that.

First off if you can definately show your key fob isn’t at fault (new batteries) or by removing the door card there’s no snagged cables or connections adrift you can bet the actuator has packed up. Sometimes it starts as an intermittent fault but in the end it will for sure fail. When faulty you will just hear clicks coming from inside the door card with no real wirring of a motor operating as normal, it’s obviously failed.

So with the help of pics I took when I removed/replaced my actuator here we are. First off remove the door card, you need to remove 3 screws, one located down in the cup holder, one behind that cover cap on top of the door grab handle (it prises off) and one behind that small plastic cover plate which is behind the door release lever (I’ve painted mine silver, most will be black plastic)
Once the screws have been removed you can lever out the door release lever surround and you’ll see the connecting cables attached, you can leave these connected for now. Now you need to release the door card from the door frame, I get my fingers under the very bottom edge and pull it away, it should release the the card from door and just work your way around up the sides of the door, it then unhooks from the top edge. At this point you will need to release the interior door handle, twist it sideways and it will pop through the door card. Then you will need to remove the connection to the upper door tweeter, it’s a little small and fiddly. There’s an additional electrical connection on the door card drivers side for the door mirror controls, this just unclips, nothing else to release if the passenger side. 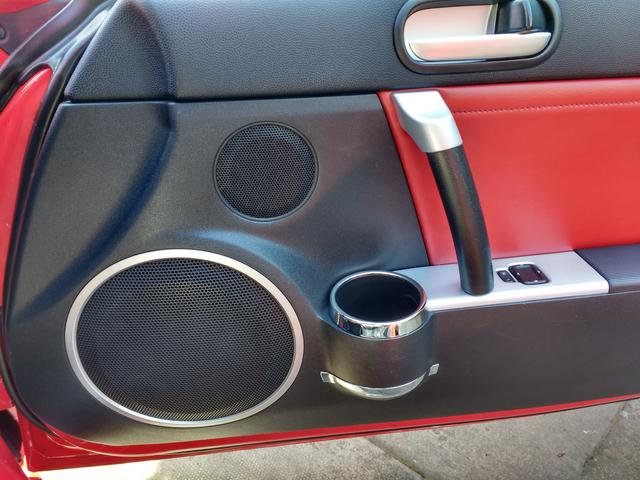 With the door card off you will see this below, the next thing to do is disconnect those electrical connections to the actuator and a small screw in the next picture down and also remove those unused elec connections which are clipped into the black plastic panel. You can now start removing that black plastic panel, can’t remember but it’s held on with loads of small bolts, have a good look some are slightly hidden. 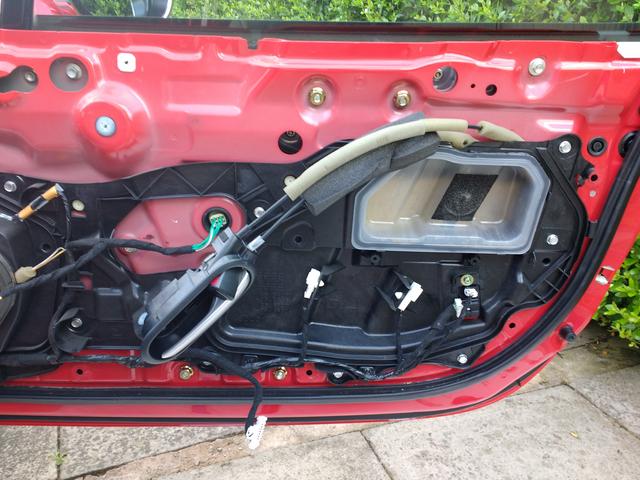 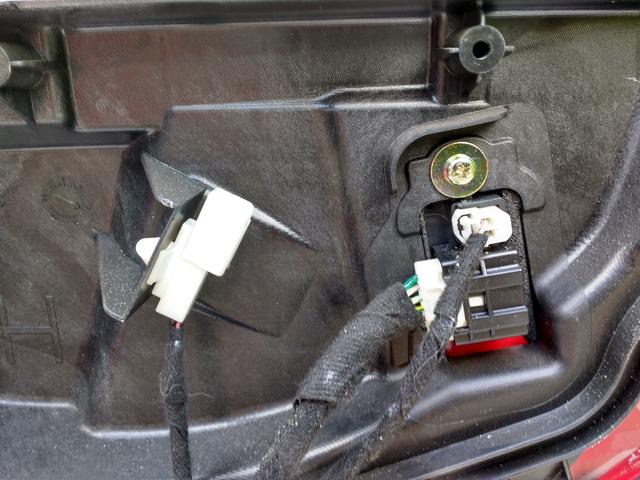 Once the bolts have been removed the panel will pull out, it’s still held in with around 3 strong plastic trim clips, a strong pull forward will release it. Once removed you will see the below and finally the actuator. 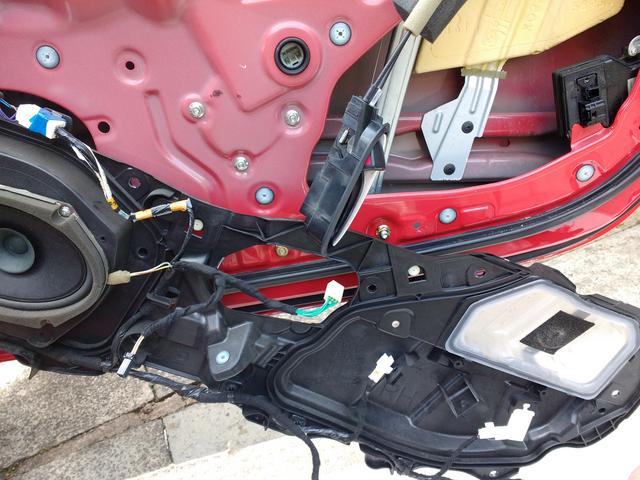 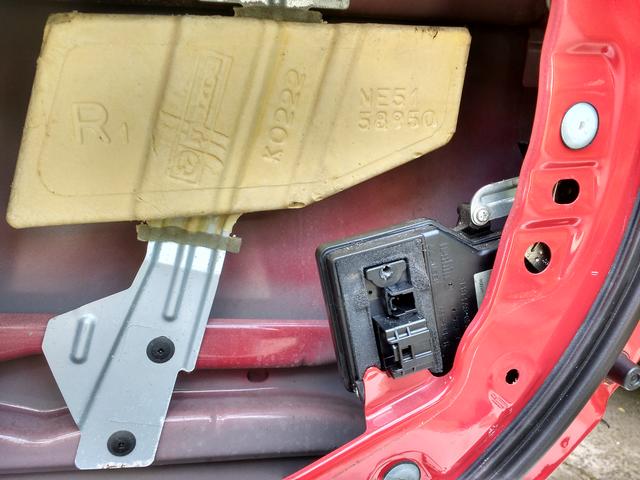 Now the actuator can be removed, you’ll see how this is fastened in and connected to the door latch but there’s just just one more bolt to remove, that’s what holds the anti theft shield for want of a better description, you can find the bolt behind the rubber grommet shown in the pic below, the grommet has been removed in the pic, partially behind the door surround rubber seal. 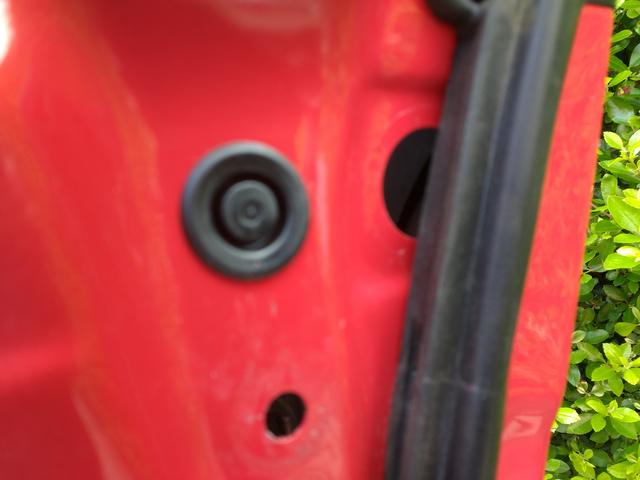 Once the shield has been removed you will need to unclip the rods connected to the outer door pull, you can see these up inside the door void, you may need a torch. They are a bit fiddly just get a thin flat blade (screwdriver) and flick the plastic clips open that fasten around the rods, the rods should then pull from the locating holes. Once all the fasteners have been removed you should be able to wriggle the actuator/catch free. You can then remove from the other end of the cables the internal door handle noting which cable goes where, that’s it. 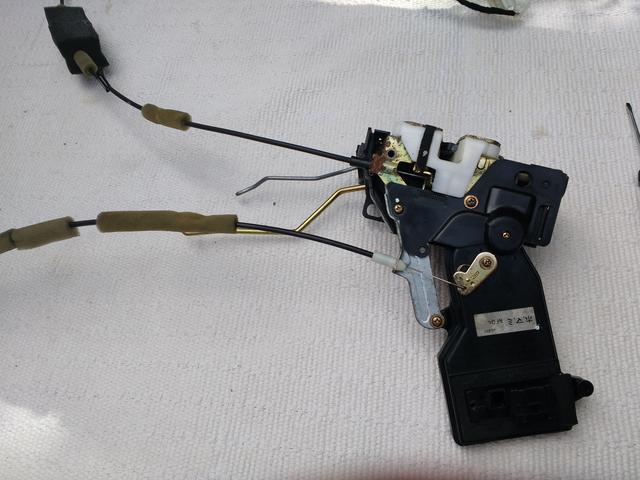 Points to note… disconnect the battery before starting if you are going the whole hog of removing the actuator. A trim removal tool to lever the door card off may help, I didn’t need one but they are handy.  You may also need some plastic trim clips for the door card, usually one or two break when removing and you will leave some attached to the door too, these will need levering out. I usually dob some grease (red rubber grease) on them before reattaching the door card, it aides later removal and they rarely stick or break again. And just remembered, that metal anti theft shield is a bit of a faff getting it back in properly, make sure it sits correctly or it will foul on the door handle rods and the door handle (outer) may not work correctly, ask me how I know !

Please if I’ve missed anything (for those that have done this job) add your comments and suggestions…thanks.

Great to have another how to, in case this ever occurs on mine many thanks, also my door grab handle on my mk3.5 looks different to this one is there still a screw underneath it?

Good question and I’m afraid I can’t answer that one, never owned an NC2 but it give me chance to edit my post to reflect the NC1 process.

Hopefully someone will add there bit for the NC2

^^^ I read only yesterday Richardn had replaced his NC1 door cards for NC2 cards, just needed a longer screw I think on the door grab handle I think I read otherwise a straight swap over.

A very useful guide indeed. I did mine the other day, took about four hours with a bit of fiddling putting things in and out a couple of times.

Well worth buying more door card clips before starting, I broke about four. https://www.vehicleclips.co.uk £3.39 for ten, came the next day. 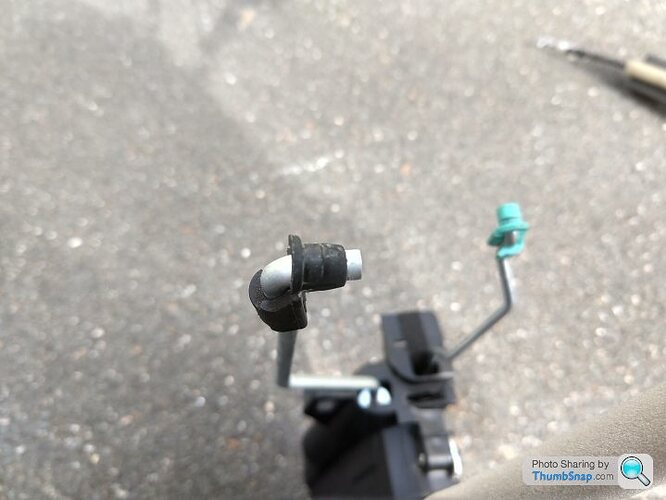 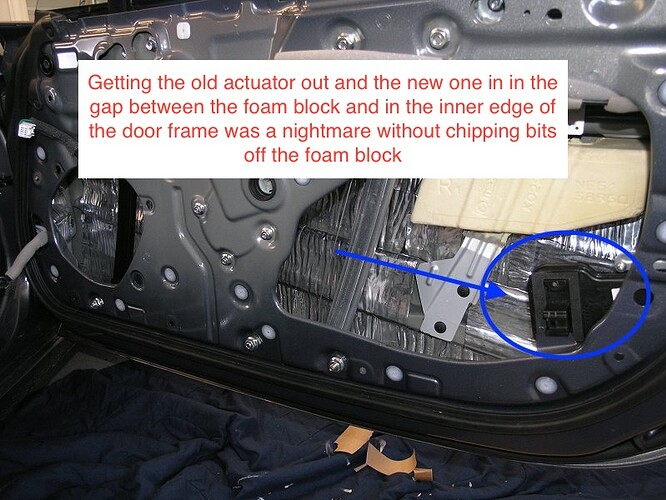 A useful link for this job is also on Pistonheads: - https://www.pistonheads.com/gassing/topic.asp?t=1776849

I can concur on the lock shield. It will take two maybe three attempts to fit it correctly.
It’s a pig.