Hello everyone. Newbie here to both the forum and to the MX5. Forgive me if I have made any mistakes with the versions of the car.

Short version of the question: do I buy a MK3 with lower mileage ( Sport spec) or a MK3.5 (Sport Tech ) with higher mileage? Costs are coming in broadly similar.

Longer version of the same question:

This is the maximum I want to pay, ideally around the £6k mark. How do these cars hold up when they hit 100k miles. I’d be looking to keep the car for a few years.

This would be our second car. I’ve never owned a two seater soft top but have researched a little and decided upon on the MX5 as the one to go for. I think I do prefer the look of the front end of the 2009 onwards model. Not had the chance to drive one yet either, only just started looking.

Any advice greatly appreciated. Thank you.

In a nutshell you need to look at service history, proper services especially regular oil changes. That goes for both earlier and the later models.
Yes the Mk3.5 has the upgrades including engine tweaks so more desirable but if looked after the earlier model is still a good buy.
On both models they are starting to show rust around the sills (rear) and wheel arches now if not properly treated and looked after in the maintenance department. So look in those areas when looking at either car as well as SH. Some of the best cars can be had from forum members so keep a check on what becomes available pre winter or post winter as members want to sell or upgrade.

PS … unless you do long drives on the M way etc I don’t think I’d be swayed just because the car has CC my own personal opinion. I would never use it anyway, got it on my daily driver never gets used, just a personal thing.

There are also other governing factors.
Whilst the 3.5 might be a tad younger, 100,000 miles could indicate that it’s been used as a daily and open to the elements, winter salt etc.
The lower mileage car, maybe indicative of one which spends it’s winters tucked up.

Then I guess it depends on what you want to use it for.
Cruise control would be a waste if it’s going to be used as a drivers car.

A lady at work has a 2009 PHRT and it’s not a patch on my 2005 regards condition.
The wheel arches are starting to flake.

Personally lower mileage would be my preference, but each to their own.

Why worry about high mileage as long as it’s got a good service history and looks tidy, anyway you said it wasn’t going to be your daily drive and you were going to keep it for some years so you would claw the mileage back and after awhile it will become a average mileage car. Just because a car is squirrelled away in the winter ( and if it’s a newish car how many winters could it have been put away for ). Doesn’t make it a better buy. It’s a personal choice, it’s what you feel comfortable with. Oh and forget cruise control what good is that on country roads which is what 5s are made for.

Service history and condition, exactly where Mick mentioned, then once these are ticked off look at the finer points

On a slightly different stance, on the later model the engine redlines at 7k rather than 6.5k. Also, the ride height is reduced on the 3.5 which many would say improved the handling. I have only had the original 3 but was seeking a 3.5 for these reasons.

I also have cruise on all my cars except my MX5. All the other cars have somewhere to rest your feet, I’m not sure where i would put them whilst on cruise in the MX5 apart from behind the pedals and that would be a recipe for disaster.

Get a car in the best condition you can for your budget. With all things equal a 3.5 would win out over a Mk3 but there are other factors to consider.

A Mk3 will be cheaper for the same condition and mileage [usually]
A Mk3.75 will have the active bonnet. Great for the safety of the things you hit, not so much your wallet when you hit things
A Mk3 is that much older that if it hasn’t been looked after the rust will be easier to spot,
A Mk3.5 is much more likely to have air conditioning.
If a car has Bose it’s a nice upgrade from standard but does make upgrading the sound system more of a chore.
The Mk3.5 has fewer cup holders but more room for your knees. The Mk3.5 door cards do fit in the Mk3 though.
Hard or soft? The phrt is lovely when it is in good working order [they are very reliable] but can be expensive to repair and you lose the handy behind the seat storage boxes.
The soft top is less refined and less secure, on the flip side it goes up and down in seconds. is simpler so has less to go wrong and it’s lighter because you get an aluminium boot lid rather than the steel found on the hard top. A complete hood can be had for a similar price to replacing the motor in the hard top

Think many phrt’s are fitted with factory cruise, but soft top’s with cruise are pretty rare.
I use cruise a lot, particularly in built up areas and on long trips/ motorways, where it helps avoid cramp in the right leg.

The soft top is less refined and less secure, on the flip side it goes up and down in seconds. is simpler so has less to go wrong and it’s lighter because you get an aluminium boot lid rather than the steel found on the hard top.

My PRHT has an aluminium boot lid evidenced by the white pitting beneath the lip viewable when the boot is open ??

Hello again everyone,
Thank you all so much for the replies, it’s been so interesting reading through them.

From what I can roughly glean - although there are slight differences between the Mk3 and Mk3.5, the differences are not huge. I shouldn’t be afraid of a Mk3.5 with high miles if it comes with full Service History ( which can be said of any car? ) .

I think with this information, I’m more comfortable going with a higher mileage MK3.5 with the right background. At this moment, it’s not going to be a daily driver, although it may spend a few journeys on the motorway - hence the nod towards Cruise.

However, if I do see a good condition MK3, then won’t be put off with that either.

One last thing - what does PRHT mean? I’m guessing this is the hard top?

Thank you again - such a wealth of knowledge. Much appreciated.

Weird. They’re a different shape opening on the PRHT. Got a magnet?

My son bought a 2010 2.0 PRHT privately for £4,500 about a year ago. That was the top end of his budget. It had 83,000m. It was a bit marked and had a couple of scrapes on the bumper but was and is mechanically sound. We listened very carefully to the engine which has no rattles or knocks at all - wisdom is that these cars are very vulnerable to having been run with low oil. It actually looks pretty good when cleaned - it’s dark metallic blue - and the interior is fine and it drives well.

So you might not need £6000 for a 3.5. But whichever way you go, you’re looking in the 10-15 year old range so condition is what matters. I’m a fan of the PRHT, although I have a 2017 ND 1.5 myself. The ND RF doesn’t suit everybody so nice PRHT’s I are always going to be popular if they are in good nick and everything works.Nice cars.

Ok so budget wise, I’m seriously looking at a MK3 ‘07 plate with around 48k on the clock, hard top.

Just another quick question from what I’ve seen on online pics.

Reason for asking is to fit in a DAB adaptor. I know I can run it through the FM stereo but in my last two cars I’ve run it through the AUX port as I think this generally produces better sound quality. Might as well take advantage of the BOSE system.

Thought as much looking through various pics. Thanks for the confirmation.

aux port on the mk3.

Unless you plug a lead into the ‘CD player’ Accessory Socket on the back of the headunit.
This lead was a bit carp and there are better ones with different options for the jack (eg plug or socket), but the key point is the connection exists on the headunit.

Or add one of these to the same socket on the back (access socket via the space where the glove box lives.) 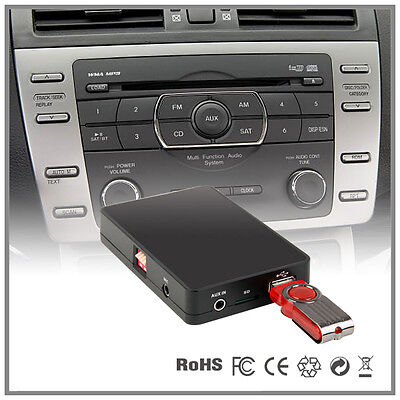 Though you say similar price,the MK3 you said was 3K the later ones 6K to me that’s a bit of a swing.I would go for a MK3 then also if you get the bug you’ve got plenty to spend on upgrading. I’m convinced you should get them cheaper have you looked on Gumtree and Facebook market place.Plus if you find you dont use it much you’ve spent less.

Thanks for the tip, appreciated. Looked at both Gumtree and FB Marketplace but spent most time on Autotrader.

Needless to say, both look great. Love the stormy blue colour. Drawn to the MK3.5 due to slightly younger, newer version . Higher miles but has FSH. Downside is that it has a chrome fuel filler cap. Do people fit these retrospectively?

It may have escaped your notice.