Having stripped the suspension for a clean up and to fit lowering springs, I still have some knocking from the rear, not major banging and only noticed at low speed on uneven roads. Seems a common observation on a mk3.

It was worse before the overhaul so some improvement. When I did the work, the rear bump stops seemed fine, so cleaned them up and refitted, however I recall that the rubber was very hard, rock solid even. I wonder if this could be a cause of the knocking. I’ve never seen new bump stops so don’t know how soft they should be.

Not a massive job to swap for new But is it worth doing?

The bump stops are available somewhere, sorry I haven’t got a link.

Is it the sport model with Bilsteins? If so I had similar, had it lowered with different springs but I had an annoying rattle from the rear somewhere only when I run over uneven roads, those speed bumps didn’t seem to bother it too much. Some say there’s a sleeve/collar on the upper part of the suspension unit that could rattle, others point to bump stops splitting.
I never investigated it any further and as my Bilsteins suspension (rear) seemed to bottom out sometimes on undulating roads I decided to take the plunge and get a full set of coilovers fitted. Now I have the MeisterR’s fitted no more rattles from the rear and perfect for the Mk3 I think. It’s a considered purchase of course but well worth it if you intend to keep the car for a long period but don’t go rushing into changing the whole lot as it could be something more simple. BTW I checked most stuff on the rear and of course changed all droplinks, that didn’t cure the rattles before the set of Meisters.

Very unlikely and I only ask because it happened to me but is your jack fitted and screwed up nice and tight in its little cubby hole?

Thanks for the comments guys. I have checked the obvious, nothing in the boot, jack all tied in tight, all droplinks replaced. I can get new bumpstops from mx5parts for about £40 so if I have any confidence it will improve things I’m happy to change. I don’t see the knocking as a problem as I know everything is solid underneath, it’s just annoying, especially when the wife commented on it the other day.

Ultimately it will be Meisters. Not this year, but maybe next, as it is a keeper.

Thanks for the comments guys. I have checked the obvious, nothing in the boot, jack all tied in tight, all droplinks replaced. I can get new bumpstops from mx5parts for about £40 so if I have any confidence it will improve things I’m happy to change. I don’t see the knocking as a problem as I know everything is solid underneath, it’s just annoying, especially when the wife commented on it the other day.

Ultimately it will be Meisters. Not this year, but maybe next, as it is a keeper.

Yes it was annoying for me too. I looked at everything, heat shield behind the back box, spare things rattling in the boot and cubby storage in there. Droplinks replaced all round, still the rattle. I put up with it, you cou;ld go over massive speed bumps no rattle, over potholes (although I tried to avoid most) no rattle but over those small uneven bits of road the rattle was there. Sometimes trying to get that rattle to present itself for further searches and it wouldn’t, annoying yes.
Anyway I’d always wanted to give those Meister’s a go and being as I aimed to keep the car for a long period, over 5 yrs now which is good for me, it’s been a good buy, infact the best mod I’ve made and there has been many. but as I say an expensive one.

I went on a tour of Scotland  earlier this year, everything perfect except when the hood is up I get a vibration/rattle from the rear. I realised after a couple of days why? I’d removed the foam (pipe insulation) from along the edges of the rear plastic shelf that the hood folds down into, when the hood is up the shelf rattles on hard acceleration, annoying me. Luckily a 5 minute fix, within walking distance from the lodgings on our holiday there was a massive B&Q and spent just over £1 rattle fixed with some more pipe foam.

I believe that if lowering springs are fitted with the existing shocks you will lose the corresponding amount of compression travel to the 30mm of drop. This means that you will be hitting the stops more often in compression. Have read several posts regarding fitting shorter aftermarket bumpstops or cutting the originals. They are cheap enough to buy to be worth a try

My mk3 has been making a similar noise from the rear in the same scenario. Drop links changed but the same noise was still there. The garage identified the noise as coming from the circled area in the photo. The bit of plastic seems to move on bumps and make the noise when it goes back into place. 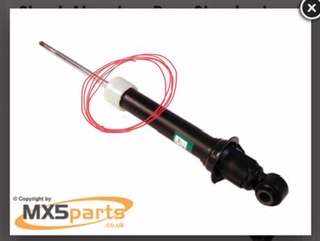 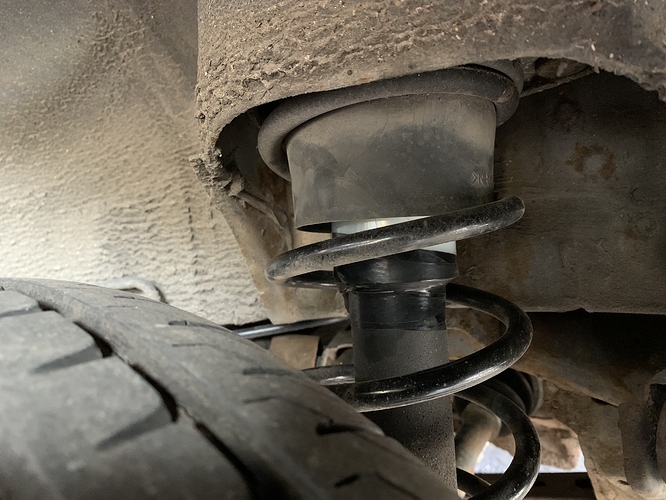 Did the noise stop?

Yep, seems to have

The garage did the same to the other side free of charge for me too.

Are you sure that plastic part should be left on? Isn’t it just storage / delivery protection?