I’m thinking about pensioning off my '91 mk1 Eunos 1.6 V-spec…I bought it fresh from Japan in 2002, and although still sound in wind and limb (120K miles), it would benefit from a re-spray and a bit of cosmetic fettling.
Before I wind up any dealers, I’d like to hear from any owners or anyone who’s driven either of the mk 4’s, please. Basically, what do you think of them…?

I’d miss the pop up lights and spacesaver spare wheel, though…

If you search on here there are a number of comparisons, I’ve owned both, both are great in slightly different ways. Meanwhile if you haven’t seen this it’s worth a look (it is reviewing the ND1 2.0 not the ND2 though which brings a higher revving and more powerful engine). 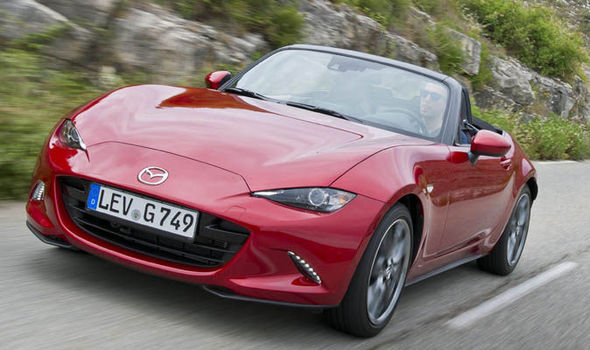 THE YEAR is 1989, the place is the Chicago Motor Show. Mazda unveils the then new MX5 two-seater sports car, a small, lightweight drop-top in the same vein as the classic MG Midget and Triumph Spitfire of the 1960s.

It’s something I’m becoming interested, ND engines, which?
Also the RF I guess the extra weight (are they heavier) better suited to the 2ltr?

There’s a number for sale near me, mostly 1.5’s, trouble is you can’t actually go look but you can click n collect just like you would groceries.

So far, the consensus seems to be that the 184 engine and associated drive train is the larger engined version to go for. There were some doubts about the original 2.0 160 version as it allegedly used the drive train designed for the 1.5 engine. The RF is also said to be unacceptably noisy driven at speed with the roof open…which kind of misses the point of an open car.
I intend to try them all just as soon as this house arrest is over…

I decided I wanted an ND in 2017. I’d been looking for a ‘good’ Mk2 to replace the one I owned, and it gradually dawned on me that I might spend a long time looking.

A local dealer had taken in p/x a 2 year old 1.5 Sport Nav, that I put a returnable deposit on before it was available, after driving their demo car. In the meantime I booked back-to-back test drives in their 1.5 and 2.0 demonstrators, to see if I would be buying the right one. It’s hard to shake off the idea that more power must be better, but the some of the reviews were saying the 1.5 was the star.

It hadn’t escaped me that the 1.5 has pretty much the same weight, power and performance as the Mk1 1.8.

I drove the 2.0 first, knowing that it might put the 1.5 in its worst light. It wasn’t a perfect comparison, the 2.0 was a Sport Nav (sport suspension and LSD), the 1.5 a SEL Nav. I did a half-hour circuit around mainly quiet country roads.

I liked the 2.0. Maximum power is largely irrelevant, but I could feel the extra lug through the gears of the higher torque compared with the 1.5 I had driven previously. I had enjoyed using the revs on the 1.5, which probably led to me hitting the limiter just as I was enjoying trying to do the same with the 2 litre.

Then the 1.5. In some ways the difference is negligible. 99% of driving isn’t anywhere near the limit, and the 1.5 despite its lower torque is flexible enough - but if you are bimbling at 2000 rpm, taking off quickly probably means dropping down one more gear than in the 2 litre.

Pushing on a bit felt very little different in terms of power and speed - looking at the speedo however showed that where I had been doing 60 in the 1.5, I was doing 70 in the 2 litre. Perhaps the performance benefit of the sports suspension, or, put another way, the extra compliance, and perhaps roll, of the standard suspension in the 1.5 makes it feel faster. The 1.5 handled the broken surface of one particular bend better than the 2.0 - one of those patches where there are shallow holes in the top layer of tarmac. The 2.0 felt to be skipping sideways a bit, the 1.5 just absorbed the unevenness.

The most noticeable difference was in the higher red line of the 1.5. That on its own I think would have swung it, but I also liked the ride a bit better on the 1.5. I can’t claim to have detected any difference in the balance, neither had noticeable understeer and both had more than enough grip on the dry road.

I’m sure psychology came into it somewhere, but I felt I enjoyed the 1.5 no less than the 2.0, and that really gave me no reason the prefer the heavier, faster car. I had also picked up a couple of speeding tickets not long before and not having a car in which I would be going 10mph faster seemed a sensible idea (not that owning a separate car purely as a toy can ever really be justified as sensible). And perversely I suppose, I like the fact that it has to be actively driven. I have an automatic diesel car for lazy motoring.

So 1.5 it was, and I was happy not to be left with any lingering doubt. When the p/x 1.5 came in, it was a bit too knocked about for me and I ended up buying a 6-month-old 1.5 Arctic. I haven’t regretted it at all, and I plan to keep it until I have to be craned in and out of it.

Would the ND2 have changed my mind? Probably not - I don’t need the speed or the bragging rights. In absolute terms, the 1.5 is a fast car if I want it to be. The fact that a Fiesta ST will out drag it is irrelevant, and if anyone wants to race me at the traffic lights, it’s “after you, Claude” from me. I’m too busy enjoying myself.

I have an ND2 1.5 Sport Nav bought new a couple of years ago. It’s a superb car; powerful enough and with great balance and precise handling. It’s all the sports car I need. It is quite a compact car and not everyone can get comfortable, so I would strongly suggest a test drive. There are some who prefer the extra performance from the 2.0 version (especially ND2), so it really depends on what you want from the car. The gearbox isn’t as robust as the previous NC model, but you would be very unlucky to have problems with the 1.5 models or 2.0 ND2. Personally, I like the idea that the 1.5 is closest in spirit to the original NA in terms of performance and ethos.

There’s a number for sale near me, mostly 1.5’s

A lightly used 1.5, despite firm prices, looks a bit of a bargain compared with new. About 13-14K at retail, so probably 11-12K privately for a 2017 or thereabouts. I probably overpaid for mine at 6m old and 4,000 miles, 18.5k v. just over 21k list when new, but I had reached the stage where a few hundred over the odds to get the right car wasn’t going to bother me.

Pre-COVID, in 2018 and 2019 we took it to the Italian lakes via the Stelvio etc and round the NC500, so it’s no garage queen. The most expensive “mod” is c. £400 of underbody treatment at MX5 restorer, then other than a Zunsport half-grille to protect the radiators, and Roadie’s rear camera and wind deflector, it’s original with just under 18,000 miles. Hopefully plenty more trips to come when we’re allowed out again. Northern Ireland is on the list, and maybe a couple of international club meets that went by the board with COVID.

I think the 1.5 is a more engaging drive, also returns (for us), and average of 55mpg, (and a smaller engine gives a good excuse to change gears more often!), but everybody will have there own personal preference and preferred driving style, so the best thing to do is to drive both and decide which one you prefer?

…good luck, I am sure whichever you get will bring a smile to your face!

They are both brilliant… Whether you buy the 1.5 or revised 2.0, can’t see you being disappointed

I think “Roddisons” usually have some nice cars for sale, and he clearly knows his stuff…may be worth giving him a call if you are serious?

And he transformed my ND 1 2litre Sport Nav with a simple remap, new exhaust .and suspension set up. Full story will be in STHT

That said there seem to be a lot of SE’s for sale of that vintage with higher asking prices. They often get the specs wrong on AT (usually the non-franchise) but IIRC the SE’s had manual aircon rather than climate so if you can’t see the degrees marked on the temperature dial it’s likely to be an SE.

Unless you don’t care about that or navigation then the SEL Nav is the place to start looking. I don’t think the SE’s had the LED DRL’s either, or phone bluetooth. Sport Navs got the Bose, leather seats, auto lights and wipers. The earlier special editions (e.g. Icon and Arctic) got the leather, lights and wipers but not the Bose, although the ICE in my Arctic is OK.

I must say that having sold a 1.6 NA in January and never having driven any other MX5, I bought a new 2.0 ND (picked up last week) and it is great. It is similar to the NA in that it is small and fun, but it really is a very different car. It has every convenience that you could want, feels like a “proper car” when inside and with the 2.0 goes as quick as you would reasonably want. s a sports car, I like the fact that it has a good turn of speed, but it is at low speed that it pulls well and the gearbox is even better than the NA. I had not considered a 1.5, as I wanted a bit of ooommph. Do not regret it!

And as you get the miles on it, it will only get better…

I’ve had 2 mk1s and have driven mk3s and various NDs.

I bought a 1.5 litre ND as it has the same light playful feeling the mk1 had which I felt the mk3 lacked at times.

It’s my daily and it’s comfortable and refined enough whilst still have that old car spirit.

The 1.5 is a lovely engine and just feels right in the car. It’s nippy enough to be fun and you can exploit all the power. The 2.0 was abit more relaxed and would be more suited to track work but I can honestly say I’m made up with the 1.5