Hi folks just checking opinions on mud flaps I can get two rear ones quite cheap but not sure if they protect anything or just act as dirt collectors. What is the consensus?

I think the problem with mudflaps can be if they are drilled into metal as was the case many years ago?  should be ok on an mx5 as fixed to plastic. My dad fitted mudflaps to his Mazda2 (universal type, not mazda dealer fit as they dont come down far enough to be effective)  They have cut down the amount stone chips, when he bought the car new in 2008 it didnt have any fitted and suffered a few chip marks in the first 2 months to the lower half of the car.  The best thing is they saved the car from what could have been  damage from a loose cats eye on the motorway, the mudflap what we could tell seemed to keep the cats eye within the plastic wheel arch liner. Looks wise im not a fan of black rubber mudflaps but they have there uses.

New rear mudflaps for the Mk1 are only available in the post-1993 “long style”, that covers the gap between the wing and the bump. The top portion clips to the wing lip. If an incorrect clip is used, or the clip is old (ie. second had mudflaps), the clip can move, along with the mudflap, leading to it rubbing on the metal work, causing rusting. The earlier style of flaps, which only cover the bumper, are, I suppose, cosmetic. On early UK cars, Mazda added an additional piece to bridge the join between the bumper and wing, presumably because they thought it was a potential mud trap.

Hello folks ,i drive a 2006 2 ltr sport all year round and desperately need to find decent mud flaps due to the grit damage , ive looked on Amazon etc but not convinced with universal mud flaps .Can any one suggest where i might purchase good quality mud flaps.
many thanks SB

The proper fit ones are expensive but in my opinion the correct looking ones for the car. They don’t really do a great deal, maybe save the immediate area behind them on the wing/sills. The rears have stopped a good deal of crud being thrown up in that area behind, the boot floor either side of the back box, it does catch the rust if not treated with underseal.
The fronts, well I’ve still got road rash up the sills, they need attending to really but it’s hardly noticeable unless you get down there for a closer look😬

Sorry for the late reply and thank you for your advice,by luck i found some mud flaps at my local car parts shop ,they are Rally Flaps by streetwise accessories .sturdy hard plastic with chrome trim and a good size ,i will be fitting them soon and will give some feed back . Best wishes Dave

Hi all, due to my root to work being mainly down B roads and country lanes ,ive just fitted two front rally mud flaps by using the original wheel arch holes and fasteners in the hope of saving the paint work along the seals and doors, but has not really helped that much so more frequent cleaning is the only way .Roll on summer!!!

I’ll monitor this thread before I make a purchase

hiya blades, I only wanted mud flaps because of the everyday use of the car and seeing it slowly deteriorate with mud and grit covering the sides and when washing the mx found grit had certainly damaged the paint work ,so fitting the rally flaps was my first choice being not to worried about the looks ,focusing more on protection . The thing is i am lucky enough to enjoy this wonderful car every day so i will have to bite the bullet and do my best to keep it clean !!! cheers …

I bit the bullit and bought a set for mine earlier this year there certainly not cheap but they do seem to help somewhat . I was undecided whether to leave them black , but decided to paint mine I’m pleased that I did as they seem to blend into the bodywork of the car better. 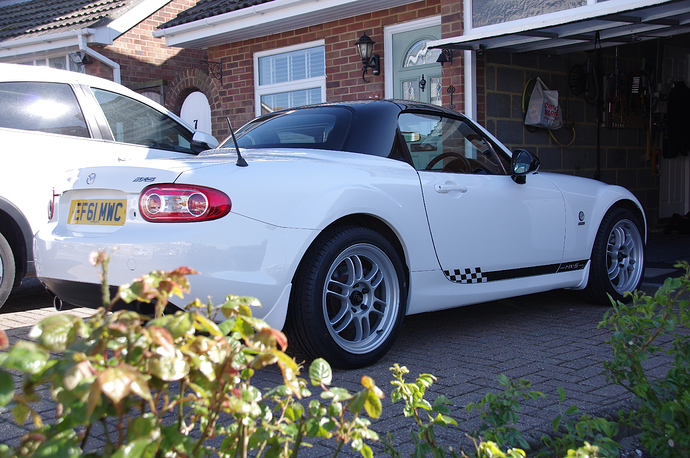