As we all know, the NA chassis can be a little ‘noodle-ish’ and floppy. As a result there’s plenty of aftermarket options to help stiffen it up and make it feel much better - something I’m planning on.

Other options out there:

You can even buy a full kit

I’d love to hear from those of you that have added any of the above and either noticed an improvement or not noticed anything at all!

My old Mk1 had roll bar, rear mk2 braces (but not the mk2.5 mid underbody braces) front underbody brace, + engine bay strut brace. The combination stiffened up the car nicely, roll bar made a big difference but then it was an early mk1 so had no seat belt tower brace to start with. The other thing I noticed was that the engine bay brace made no difference to chassis flex, but when I removed it for maintenance the front wheels experienced a definite ‘shimmy’ sort of shaking in the steering when going over rough roads. This went away instantly when the factory mk2 brace was re-fitted. Worth noting that the mk1 engine bay braces look nicer but the mk2 seems a much better design as it resists twist as well as side to side forces.

I fitted the Cybol fender brace, sharpens up the steering and helps a little with scuttle shake. The chassis rail stifferners from Skidnation are going on this week as are Meister Zetas, expecting a big all round improvement, we’ll see. 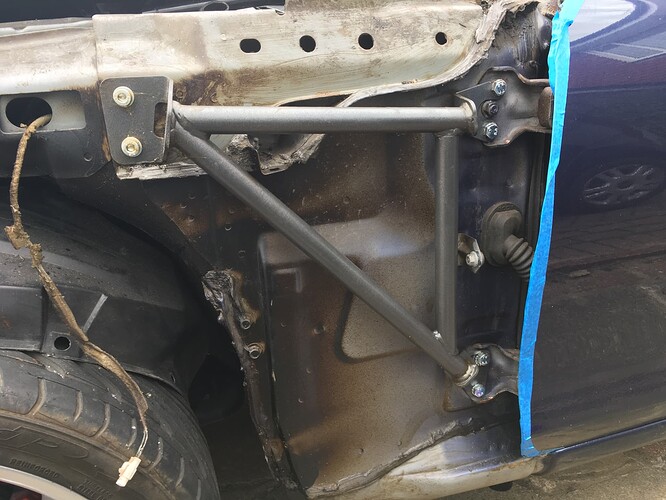 Look forward to hearing more about your new bits!

Doing it all bit by bit, to gauge improvements.

After a lot of research I’ve concluded that, actually, there aren’t many ‘dead weight’ brace mods you can do for the NA MX-5.

There are, however, some that have much more noticeable effectiveness, the top tier ones being as follows:

The other options are spoken as being good but more incremental improvements to rigidity.

The important thing is that the suspension is soaking up the bumps and not the chassis!!!

May your chassis always be rigid

Goes without saying (I hope) that alterations or additions to the vehicles structure are best declared on insurance.

Any excuse to utterly screw you for undeclared mods when you need them most…especially if an injured 3rd party wants yer ■■■.
Saw it happen to a good friend in the 90’s. Had to sell his house and lost his business.! Long story and not for here.
My insurance has a list of 11 chassis & alloy mods…all noted…no extra charges really.
The main question was…"do they substantially make the car perform differently from original and or has engine power been altered?
The answer was no…apart from superglue mechanical grip & general handling.
Sent them a few like this. Still did not faze them, and I got my agree post-resto valuation.

When someone says “80% improvement”, 80% of what? Some mystery plucked out of the air.

Adding braces at the front and rear (or stiffening) allows chassis tuning, essentially by reducing subframe flex. When Mazda added a rear subframe brace in mid-1991, it wasn’t because Mazda suddenly decided the NA MX5 had a terrible chassis. Actually, it was intended to tame some of the handling characteristics of the car for the benefit of less skilled driver. Those 89-90 cars still offer the purest experience.

The cockpit brace wasn’t added to improve stiffness/NVH, it was added to ensure Mazda could keep selling the Miata in the US (to meet side impact standards). In Europe, Mazda deleted all of these braces on 90hp cars.

When the NB was introduced there were subtle and not so subtle changes to the basic body shell with the main objective of improving crash performance.

One of the subtle changes was the additon of transmission tunnel gussets; little pressings that were tack welded either end of the tunnel. At one time you could buy these as a spare part from Mazda, and in Japan, they became an insiders upgrade to the NA.

Most of these braces are just additional weight. The main reason you add a rollbar is not to stiffen a car, but to help protect your nut. Side bars are one thing, but they are intrusive. 10 years of Carbing side bars buggered up my right ankle. Mostly it seems to be about bragging rights rather than achieving anything measurable on a road car.

If you read the BOFI article the author does say that of course there’s no real way of tangibly describing the improvement, but if he were to comment on how much better the chassis rails made it feel he’d go for about “80%”

Of course other benefits include less rust if you scrape it and easier jacking points without crushing the frame rails.

Ultimately the MX-5 lacks the extra structural rigidity from lacking a roof, and having driven truly excellent chassis cars like a lotus elise, I feel that in my case the chassis is absorbing bumps that should be taken care of by the suspension - something else I intend to improve. If along the way I also improve my chances of not being turned inside out in a crash then I won’t be unhappy with that!

@Scottishfiver I’m starting to think that your car is what I’m aiming for from mine - do you have any pics/build blog for it?

Or chassis rails create moisture traps, mud traps, rotting out the “chassis rails”, accelerated through galvanic corrosion when someone bolts on a shiney stainles steel brace.

Scraping over speed bumps; very rare for me in my lowered Mk1, but then I’m not braking as I go over them. When they scrap, they are no scraping in the middle, but at the double skinned front.

The Japanese also fit frame rails covers, only they do it the proper way, by seam welding them on. But generally for cars where they are involved in competition, rather than tootling around on public roads.

Or bolt on a hardtop. 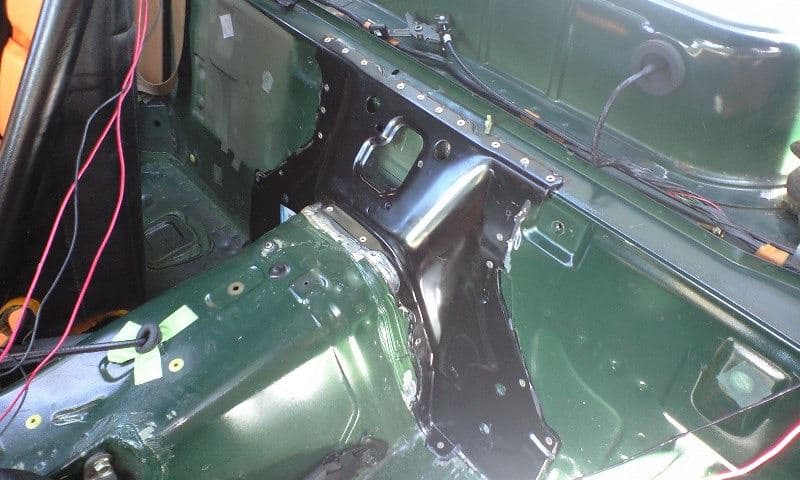 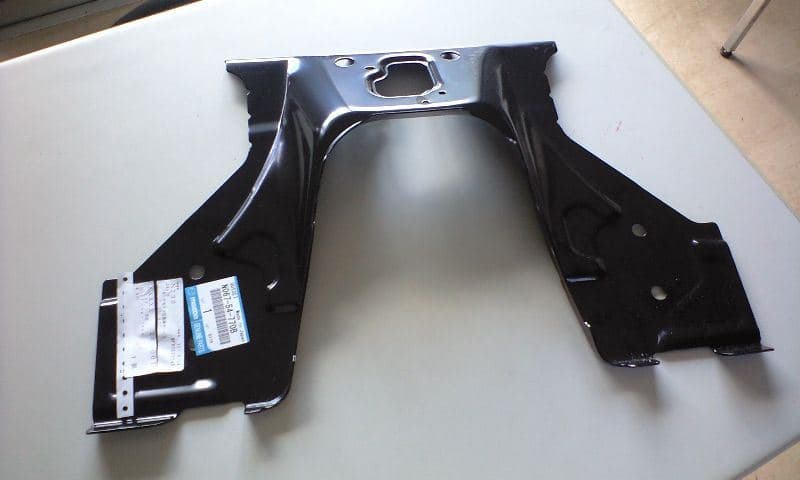 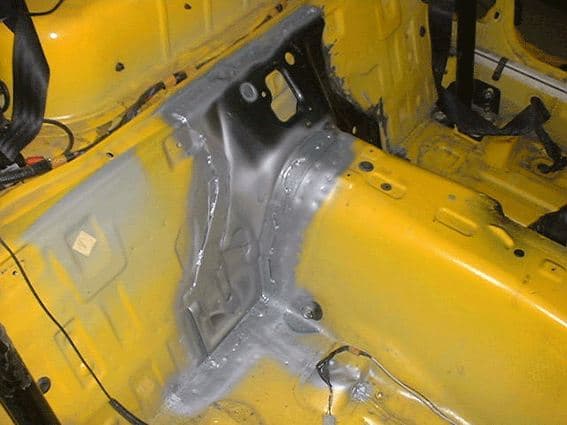 So what would your main recommendations be for someone trying to make the car feel a little more solid and rattle/shake a lot less over small bumps (aka british roads)?

I’m fairly new to this but I make up for it in enthusiasm, so keen to learn. My chassis rails were crushed by a forklift at some point (probably during import) so I’m going to get them repaired and then hopefully reinforced further by themx5restorer. 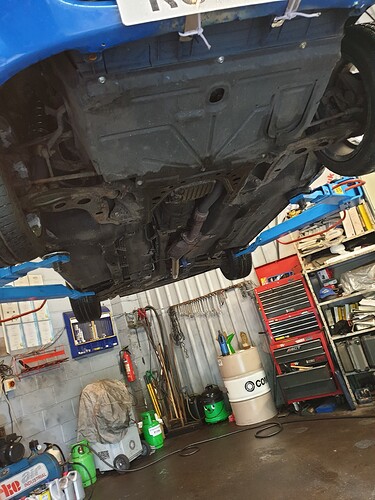 I was hoping to have the rails put on (and other braces at the same time) but maybe there’s a better option?

I’m also not so pleased with the HSD coilovers on the car currently, so will probably replace with something like ZetaCRDs or similar. Still researching and sitting in other’s cars to make up my mind on that one.

I think with a 30 year old car, renewing the bushes would be a good start, but not stiffer bushes. Adding bracing will probably highlight deficiencies elsewhere. So best start with a good baseline.

If repairing the anti-drum channels (the “chassis rails”), probably best to have something welded on top, rather than drilling the floorpan. Old rails need to be cleaned of underseal etc, knocked back into shape. Or, just leave them alone if there are no splits in the metal, and monitor.

I believe some crushed rails have been repaired by cleaning back, welding on pins, and using a slide hammer to restore to the original shape.

Adding things like frame rails, if you want that, is probably the last thing you want to do after everything else.

The crash bang wallop ride on British roads, in a NA, is largely down to the lack of travel on the rear shocks (the tops of the shocks hitting the bumpstops when on a B-road. The direction I took was to fit Mk2 tops and hardware, with Protec shocks and P5 pigtail springs. I rather trust the OE Mazda parts than the uncertainties of a Chinese top mount built to a cost.

I knew a club member who had also gotten himself a very nice NA. He considered himself a good drive, being a recently retired RUC driver. He immediately decided he wanted to make the car handle “better”. The worst he did was to call Moss and get their recommendations. They sold him super stiff tubular ARBs, becaue they made the car handle “better”. A week after fitting them, he stuffed the car into a ditch on a familar road after the tyre bead came away from the rim, likely because the car was cornering so flat. The car was saved though, minor panel damage to a previously concours car.

Overall, Mazda spent a lot of money developing this car. Be careful about upgrades invented by someone in a shed. 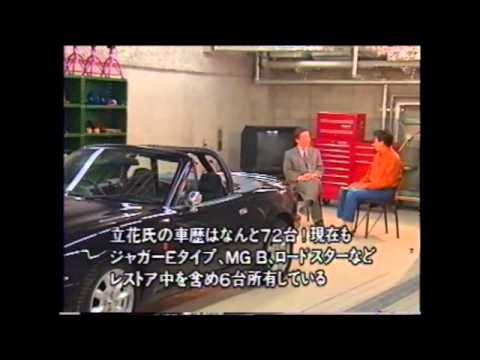 That’s an interesting assessment with the lack of rear travel in the shocks. When looking at reviews of coilovers I came across this video for a set of ohlins DFVs fitted (probably one of the priciest options). As you can see, it often rides on the bump stops which isn’t ideal, especially given the cost of this setup.

Your NB top hat upgrade sounds like a good idea based on the above, what hardware did you purchase for the conversion? Also - I guess this makes getting suspension harder as kits are all based on the Mk1 or mk2 haha.

I used all new parts, but things like the top mount itself never wears out.

Bumpstops are a genuine part of the coilover assembly, and performa a function. I suspect ride comfort is not an aim for Ohlins.

I have fitted under fender braces onto my Eunos Rs, they help with scuttle shake.
I did have two Rs till earlier this year one having completely stock suspension and the other with the braces, IL motorsport uprated bushes, diff void fillers, uprated antiroll bars ( only slightly stiffer than stock ) brand new OEM Bilstien shocks and springs. I have never hit the rear bumps stops even when sprinting and Hillclimbing. The uprated car is a lot sharper with less roll. I also run extended lower control arms on the front for more negative camber at the stock ride height.
As the car is used for hillclimbs too much antiroll stiffness is a bad thing on hairpins going up a hill. Its fine on Airfield sprints too. Circuit use would require more stiffness. As far as I am aware the Mk1 was designed so that on extremely hard cornering ( Circuit Use ) it would settle onto the rear bumpstops. As soon as the car gets lowered you will lose travel unless the spring rate is raised. ( Cutting Stock Springs down is a very bad idea )

I guess to a certain degree, this is why I found my Koni Street Kit with shorter stiffer rates utter cack.
Wooden, crashie, oh so cool with ride height but best left to under 21’s zit squeezers.
Kept the Koni shocks but fitted new OEM springs and by luck more than design it’s brilliant. Very pliable, but well controlled. Bit more roll but I do not feel compromised. All helped by everything else being renewed maybe. Happy chappy.