NB What to do? re-paint? or too much already spent?

Okay, so I bought my NB from a relative for a cheap price… So far, I have spent £250 on wheels (I know… not really a priority item but they look great!), £600 on a major major service, cam belt, pump filters, leads, head gasket, discs and pads all-round blah, blah… she runs beautifully! £40 on a new battery, Cheap style bar and £160 on leather MK2.5 tombstone seats in great condition.

So, the paintwork is poor… From 20 yards away, it looks okay, but the lacquer is peeling in multiple places and there are small dings and creases in every panel.

Question is, having spent around £1500 on an R-reg NB with 82K miles, do i do the final step and spend another £1000 on getting the paintwork done?

Do you intend to keep the car for a long time? I keep throwing money at mine knowing that it’s going to be with me for many years to come.

Are you confident that the rust situation has been inspected and is in good order? I’d definitely be checking that out before investing too heavily, and even consider an underseal if it hasn’t been done already.

No official inspection but looked at these forums and checked the areas that were highlighted. Only surface rust seen. The welded repairs are pretty coarse to be fair and part of the re-paint would be to correct this… I know a man, but it is still £1000! I do intend keeping this for at least 3 or 4 years… I guess I would drive it more if it looked prettier!

I should say, it is my first sports car and I got the bug a little. It is whether I cut and run and invest in something else, like a later MK5 with retractable metal hood instead or enjoy this a little more…

Great car to pick as a first sports car! Totally unbiased opinions on this forum, naturally

I’d say it boils down to budget and if you need to use it as a daily or for longer journeys. That said, I imagine that plenty use the NBs as daily cars just fine.

Performance bits I’ve seen look to be cheaper on the NBs. I own an NC and I’m always on the lookout for coilovers but they seem to be waaay more expensive than the NB.

I have never owned an NB but I read that these are perceived to be a purer steer in standard guise than an NC. Happy to be corrected by those that have actually owned both though!

Budget wise, £1,000 is a big number to some (including me!) but is fairly affordable for others. There is then the cost of actually buying a new one to consider, too, and whether to go in for the ND or an NC.

You could keep the NB for a bit longer without throwing a huge deal of money at it, to see if the bug stays, before spending £1,000s more on doing bits to it?

I previously had a 350z and had the bug for about 6 months, then realised low teens mpg, the sensation of weight in all contexts, and not being able to use that power took away from the ownership experience. That noise though…
I considered getting a wheel refurb, underseal, and paint correction on it, but I’m glad I didn’t in hindsight, as I don’t think it would have changed wanting to find another sports car.

Thank you for this… It is my weekend car and I do love driving it (when we can!)

Just to give her a bit of context…

Wouldn’t bother, car looks great and when you’re doing the important bit (behind the wheel) you won’t be bothered about the paint…

I do need to sort out a large patch of peeling lacquer as it looks awful! Maybe just a sand down and can lacquer…

Yeah looking at those pics it looks great! Nice colour combination with the wheels. Enjoy!!!

From the pictures it looks just like my car. Supreme blue (the best colour imho) and gun metal sport wheels. If the budget is right,then paint it.
You won’t see the money again,but you’d see the benefits every time you and many others admired it.
Mine could do with a respray (minor scratches, but looks OK),but can’t justify the cost just yet.
They’re great cars,enjoy it

Only you can really decide if it’s too much spent. Cars like this are never going to return the investment you put into them via financial means. They give back by the enjoyment you get out of owning and driving them. If you’re going to keep the car for another 4-5 years then I’d say a respray is very logical if the paint is something that bothers you. As others have said though I’d make sure the bodywork is rock solid first!

It looks like you can get discounts on any work, as that £600 service you mentioned looks cheap to me, and you say you know a man for the paint job.
Lucky, lucky, lucky…

Lucky that my Wife’s cousin is a very good mechanic. Did the whole lot. It had been quite a few years since it had a service, I guess due to not being used very much. The result was two snapped bolts, one of which needed drilling and repairing. Still, the engine and brakes are sorted now.

I wouldn’t be surprised if my Son has this after me in a few years when he starts driving!

Full welding and by that I mean replacing and repairing the inner, middle and outer sills of the car with associated arch, floor pan and A post repairs with the subsequent paint blended in can cost 6000 to 7000. This is the only very big cost that almost always has to be farmed out on an MX5 - although the realisation of it is killing MX5 na’s and nb’s at a rate.

To the extent the car is sound then as you say £250 p/a is nothing - it’s barely a basic coffee and a small cake from costa every week (or every year if you use Scotch Corner Services) and having the MX5 is way more rewarding than either of those things.

Unless you’ve done it already I’d inspect it fully looking at the panels from the inside using a borescope as you can’t tell looking at the outside. I’d look in the sills through the holes under the scuff plates, very closely round the arches and down the drain holes. I’d pay very close attention to the front chassis rails and the floor rails and the floor of the inner sill.

If after all that it’s sound and you still want to sell it for what you paid for it plus the wheels and hard top, as you seem convinced you won’t recover the investment, then you may have a lot of interest from this forum as you’d be mad to sell it.

If it’s not sound you may want to cut your losses.

It does look nice, as said before I would want to know what lurks below due to my lovely looking NB having some serious rust underneath.
Could I suggest you buy a cheap inspection camera from eBay, one that works with your smartphone would be fine. Only £12 to £25.
If you pull up the door plates you get into the sill void and feed the camera front and back to see what you have got. You can also get in through the plastic clips that hold the front of the rear arch shield and around the rear wheel arch once you have taken the boot carpet out.
If it looks good I would be tempted to have it sprayed and keep it.
You could always buy a Dacia Sandero and loose over £1000 per year

Immediately jumps on Ebay to look for a camera…

Those sill repairs look rough. Not worth repainting. £1000 won’t get a great respray,

Good automotive welding in a proper workshop is about £35 £50 per hour depending on where you are plus vat. That would suggest at your top end of £1000 per side your expecting the restorer to do it for £833 before vat which means your giving them between 2 and 3 days to do this work at 8 hours a day including cutting it out, making new panel parts and repair sections, fitting fettling and welding, prep and paint the repaired area. Something like this: 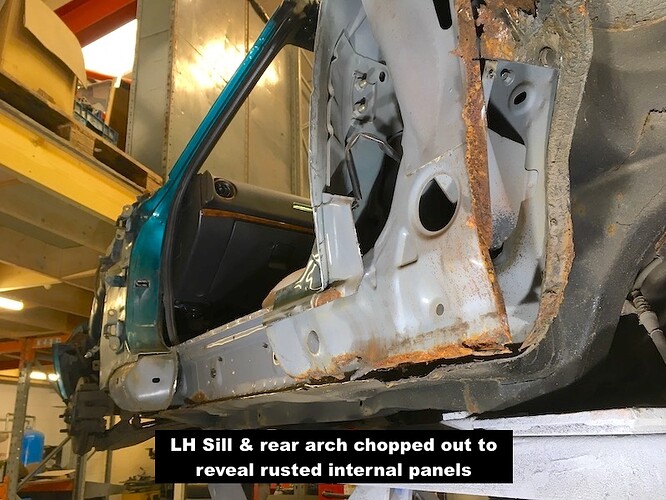 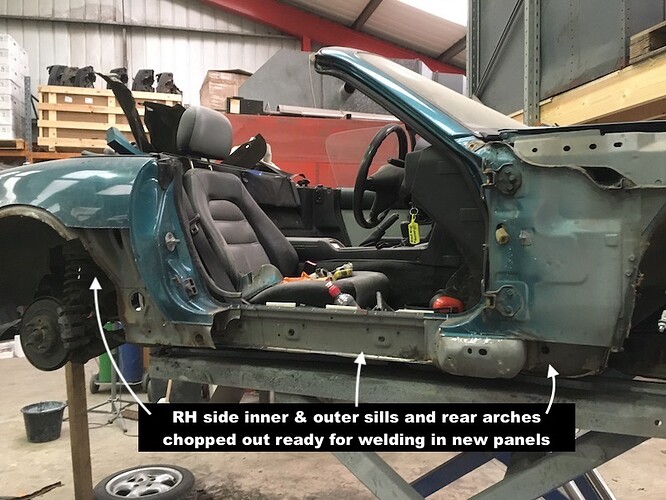 This isn’t my car but my NA needed similar - it also had a full mot with no advisories six months before these issues were identified and no visible rust other than some minor surface round the jacking point on any exterior panel and an inspection by an MX5 specialist a year before that.

If you watch MX5 restorer videos ( mine didn’t go there as it’s too far away) they talk about this level of work taking weeks - and I can believe it.

No it’s not an economic repair but for these owners it’s “their” MX5 and for the op this is what bad looks like and this is what it costs - hence get it sprayed but only if it’s sound or it has special sentimental value.

The only thing I wince at with these pictures is the interior isn’t stripped out (I took all mine out), I can’t see they have gone to the bottom of the A post which can be a mess if water has been trapped in the sill at some point in the past and, in these pics the shell isn’t braced with the sills and strengthener off which mine was - although i don’t know if that is necessary or not on an mx5.

If you look at the famous pics of “Phil” at skuzzle getting its sides cut out those pics are similar and I don’t think that was 1000 a side either.

You may have meant a superficial rear sill repair and the arches - that is more like £2k but some folks will do that work for you and not mention what is going on further up the sills. When it gets into the inner sills and beggars the strengthener and the edges of the floor pan are going this is a serious amount of work with no off the shelf replacements for the inner or strengthener. Everyone bangs on about rear sill replacement on an MX5 grinding rust on the outer sill or replacing it where it dips under the rear arch and putting a new wing bottom repair panel at the back. I think there are more cars with issues down the length of their sills than some care to admit to or know about. I only found out about mine as I was taking the underside to bare metal and I wasn’t convinced it felt sound (sometimes they don’t feel right) so I picked at it a bit, acquired a borescope and had a proper look. From the inside the sills were in a hell of a state from about an inch forward from the seatbelt mounting point and the strengthener and inners were corroding badly to the point the strengthener would have lost most of its integrity.