Hi all, first time post on this site and looking for owners who have problems with noises from the rear of their ND MX5s.

I’ve noted that some have reported problems on the Miata forum with suspension bushes in the rear uprights but vague as to which ones, and there are quite a few. Must admit there’s very little sign of wear on my 17 reg 49k miler, I removed one rear wheel and bolted an arm to the hub to get more leverage but nothing moved so wondering where to look.

It sounds for all the world like there’s something loose in the boot that hits the body over sharp bumps in the road. Noise was reduced by lowering tyre pressures, which also improved the steering feel as pleasant by-product, now at 27psi instead of 29psi all round. I checked the exhaust which appears very firmly anchored and unlikely to be the cause.

Hi Richard and welcome.
The Hub Carrier bush problem appears to be very common on the ND and owners have managed to get varying amounts of financial recompense from Mazda towards a very expensive repair. The attached is from an owner who thinks he is now heading for a repeat failure:

You will also be aware by now that many others have had, or are still having, the same problem with their NDs.

Only this morning a new member reported on here that his ND is also showing signs of this design and durability fault that is plaguing the Mk4 MX-5, even at very low mileages.

Well, since I had my hub-carriers replaced last year I’ve only covered around 7,000 miles and guess what…? THEY ARE BEGINNING TO KNOCK AGAIN ALREADY!! "

Hi Phil, yes in my searches I found the info about the springs and the cure, a plastic C shaped piece of plastic that clips onto the 2nd coil down. I checked and mine already has them, I think as a factory fit.

Hi Nick, must say it’s not very encouraging, do you happen to know which bushes are at fault? Looking closely at mine it appears some are of the type that are deliberately waisted to lend compliance? Or maybe it’s the wear they talk about?

Really looking for a guide as to which bush we are talking about here. Having done the ‘load it with a long bar’ test and found nothing untoward it seems a bit implausible that it would make a noise that souds like a hard contact. Now, if I knew which bush i could look way more closely…

Whilst poking around and trying to find out whether anything was given to movement i did once find that the RH driveshaft had a small amount of end float and could be made to make a noise by moving by hand. Didn’t check the LHS.

I bought the car S/H from a Mazda dealer so there is a warranty on it, but it’s better to go forearmed with a plausible cause of the noise if a claim is going to be successful.

For those who haven’t looked on hrrrmm, other MX5 sites, I’ve located the source of my knocking, the brake calipers.

I’ve spent a couple of hours prodding and poking all the suspension bushings, finding, yes some do look to have done 49k, but no none of them have failed and didn’t seem to be the cause of the problem. The ‘worn’ ones look as if they have some of the rubber infill deliberately ‘left out’ possibly to soften the response to acceleration and braking torque to get some rear wheel steer effect, that makes them look as if they have failed, but mine haven’t.

Which then led me to start tugging at the brake caliper, which had quite a lot of movement on the slider pins and could be made to make a clonking noise even by hand. So, to eliminate it from the equation I took a bungee cord and wrapped it around the caliper where the handbrake cable attaches and the nearest radius arm, Drove over every manhole cover down my road, all of which made it clonk previously, and nothing, just a gentle thump from the tyre.

The next hurdle it seems, is the refurb of the worn parts in the calipers. None of the usual suspects for MX5 bits seems to stock parts for the slider mech, I may be forced to go the main dealer route.

I did spend a time wondering why I never picked up a noise during the test drive at the dealer. Couple of things. First, pre-delivery they replaced all the discs and pads, which will cause the slider pin to be at maximum withdrawal from its bore in the caliper carrier, therefore minimum steadying effect. Second, a shall we say, large salesman was sitting beside me in the car during the test, which would compress the suspension more and make the ride less skittish.

Whatever the cause though, it’s less hassle than the other problems it could have been.

Hi all
I have the same problem on my 16 plate ND , Mazda notices it on the MOT they said it was the top rose bush ??? At this moment they are in touch with Mazda UK to see if there is a fix for it , some of the more senior mechanics remember changing just the bushes and not the whole assembly , I will post my findings when I get a response back from my Mazda dealer.
Cliff

Yes, please do Cliff, you’ll have at least one interested reader!

Hi Richard
just had a reply from the service centre at mazda Lincoln (pentagon mazda) they have had a reply from Mazda UK and the top rose bushes cannot be changed out so I have to buy the whole assembly for each side comes to the grand amount including fitting of £1605 , I,m going to live with the knock for now and see how it goes on the next MOT.

i will get in touch with mazda uk tomorrow and see what they say as this seems to be a common fault .

and a hi and welcome to Soileduk

Hi all, yesterday I established that Mazda not only don’t sell the slider pins seperately, they don’t even sell the bracket assembly, instead it’s the whole caliper for £198+VAT each.

Hence I decided to do some measurements on my brake caliper to see what we’re talking about. The slider pins are different top and bottom, one is plain and has a diameter of 9.62mm, the other has three flats at 120deg intervals and is 9.82mm diameter. The caliper brackets holes in which these slide have diameters of 9.92mm. All measurements with digital calipers. That’s a lot of clearance in the smaller pin, probably more than necessary, and they weren’t worn so it’s by design.

I went looking for a similar pins similar to the larger diameter one on ebay. Looking at the pictures and dimensions the penny then dropped. All the parts for brakes are made by a handful of suppliers and whilst the brackets are unique, things like the slider pins are not. I have an axle set of the ‘three flat’ style pins on their way to me for a mere £13.98. Dimensionally and design, very similar to the larger 9.82mm pin and at that price I’m willing to experiment with closer fitting components.

Well, the pins arrived today, fitted them just a few minutes ago and drove across several drain covers that would normally result in a massive clonk from both sides of the car. This time, only a subtle clonk, something I think I can live with because it only did it on the roughest ones. It’s definitely the brake caliper that’s causing the noise on my car.

The parts I bought were 59/60mm long x 10mm diameter pins that were listed for a variety of vehicles, I bought these

There was a small amount of wear on both old pins, see photo. 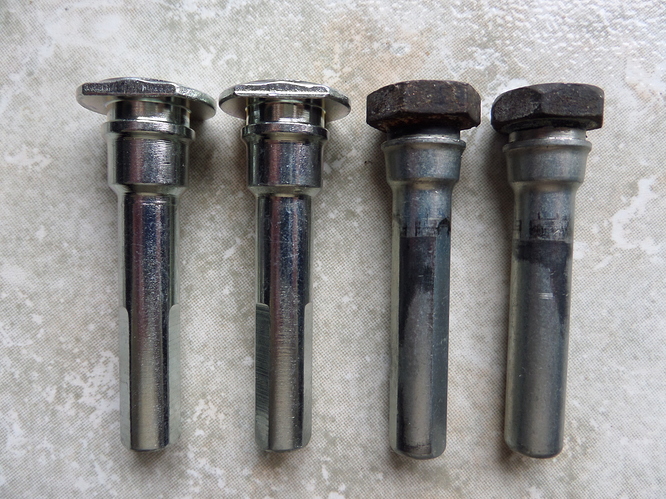 the photo shows small differences in form, but fit and function are fine. £6.99 per side, bit more palatable than new calipers… which would in any case have probablt ‘clonked’ since they would have been those with smaller diameter pins, how annoying would that have been?