I have a 1991 Eunos Roadster NA 1.6, in Silver Stone metallic (what’s left of it anyway). I’m based down on the south coast in Worthing, just outside Brighton. Here’s my journey so far! (bit long, sorry)

I’ve always had a ‘thing’ for the mk1, since the early days and having grown up playing Gran Turismo

- maybe it’s those pop up headlights?!

Fast forward to my 30’s, my premature midlife crisis kicking in, I needed an MX5 in my life! Being an automatic only license holder - due to personal reasons - finding a good, affordable auto mk1 was like trying to find unicorn ■■■■. Hours of scouring ebay, autotrader and the likes, to no fruition. Then one day, I came across a listing on ebay for an NA Auto, 1.6, starting bid at £500 and only a couple of days to go. Few messages exchanged with the owner, and I secured it for £450. I was so excited!

The car, as you’ll see, is not in the best condition, but I knew that, and still took a punt on it. For £450, for a Eunos with MOT, was an opportunity not to be passed up! I drove it back from Kettering to Worthing, a good 150 mile journey, and it was absolute faultless to drive. Stop start traffic as is usual for the M25, and didn’t overheat, excellent oil pressure, didn’t make any unwanted noises and was solid the entire way. I was beyond impressed. But the bodywork was terrible and there was no way on earth it’d pass another MOT. So I used it as much as I could for the last few weeks of it’s MOT, and I absolutely fell in love with it, to the point I named her. Maisie, the Miata. But then we had to have her parked up for 3 months till we decided what to do with her.

Fast forward to 2022, the car went through a full inspection just after new year, and the rust and rot was far worse than first anticipated. I knew the sills were rotten, but I had no idea, just how much more was rotten too. In the end, I had to buy two new front wings, two new full sills, two new rear arches and two new inner rear arches as they were all completely shot. The drain holes for the roof were completely blocked with debris which possibly made matters worse. Also there was some rot setting in under the passenger footwell so some steel plating had to be sourced to repair this. Mechanically though, absolutely sound. Aside from the power steering rack developing a leak due to being stood in the elements for a while as the dog ate my car cover…

So far, I’ve spent £2200 on her, that’s including the car itself. Managed to source some original Daisy’s too, to replace the awful after market 15"s.

Anyway, here are some pics! And I also have an Instagram page for anyone interested in following my progress to restoration! @maisiethemiata 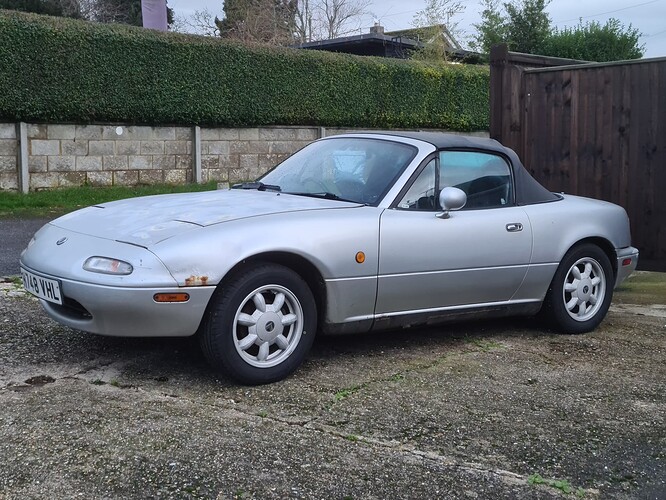 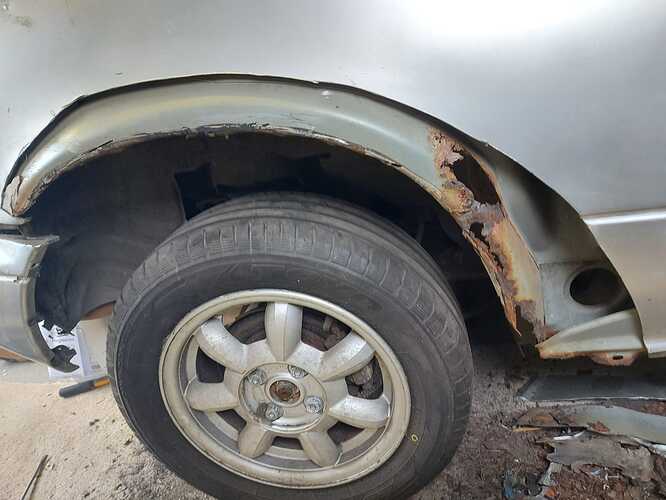 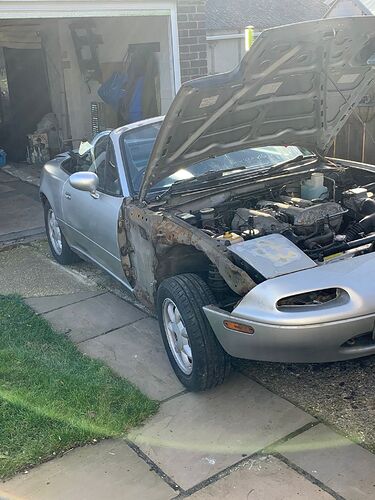 Am I mad? Possibly. Anyway, thanks for reading and I hope to hear from other members here as I’m sure I’ll need some advice

Welcome to the mad house.
It looks like you’re well on your way to breathing life into the patient and getting her back on the road again.
Hopefully just in time for warm, sunny weather when you’ll be able to enjoy her to the fullest.
It would be great to keep up with her progress if you get the opportunity too.
All the best,
Guy

Welcome! Mk1s are becoming classics now and will only go up in value so if yours is sound mechanically then your bodywork investment is good value imho.

Plus you have the satisfaction of resurrecting something that you will cherish and enjoy for a good few years. I’m absolutely besotted with my Mk2.5.

You are positively certifiable.
Indeed, mad as a box of frogs on speed.
You need immediate help.

That’s just some flesh wounds. Nothing to worry about.

Apart from that, me too.

However, when you are deemed fit to be released (on licence) into the general population again, you can drive a rare example of the finest global mass produced sports car ever that kicked motoring history off…for very little money really.

I’d get all fluids…every one of them…incl water, diff…changed out including the ATF.
You don’t have a sexy diff unless it was modded later. Just a par for course “open” 4.1
You won’t get all 6.7 odd litres out, but maybe 5.5 or so.
Plus an Auto filter…which Andrew at Autolink in Dumfries will have in stock.
Now, must think up more ways to spend your money.
Hard work this is…

The arch rust is part for the course; I would recommend anyone who is getting sill repairs done on a NA to factor in arch repairs. Blocked drains don’t help, but the real cause of the rusting is failure of the wing lip seal. I religiously kept clear the drains for 12 years. Still ha to have all the rear sills and arches replace.

In a way you brought a NA in the right possible way; get an honest car cheap, warts and all, rather than paying a LOT more for a car that looks superficially nice, but is hiding a lot of problems, including poor repairs.

Even cars in Japan are rusting, and the repairs can be appalling. Yes, he really tried to solder bits of metal in place, before soldering on mesh and slathering on filler. Soldering seems to be a common DIY approach in Japan to fixing rot. So the days of rust free imports are over.

Another Mk1 saved from going to the scrap heap in the sky. (All mx5s go to heaven)

You will not regret it and great you are saving a mk1. I have a mk1 1.6 auto, and love it, not the fastest, but puts a smile on my face, and a relatively simple & tough gearbox.

I only have an Automatic licence for personal reasons, so I’m eternally grateful that Mazda even made the MX5 with an Auto. As you say, it’s not the fastest in the world, but it’s so much fun. Up to a month ago, I daily drove a 300bhp Alfa Romeo, and I much preferred the drive of the MX5. Plus, the community of MX5 drivers is fantastic. When it was roadworthy and could drive it around, used to get waves, flashes and beeps from other MX5’s, was really nice! Can’t wait to get it back on the road

It’s currently 300 miles away at my parents in North Yorkshire, with my stepdad doing the strip down and rebuild of the car. However, he’s called me to tell me he’s no longer able to carry on with the project due to ill health and struggling to do any kind of welding work due to space constraints.

Now I face a bit of a dilemma.

On one hand, I really love this car and have had a lot of fun in it while it had it’s brief period of MOT, but it needs a lot of work doing to it and I have neither the time nor funds anymore due to my work cutting pay and the increasing living costs so I could do with some money for it.

I have spent, in total, including the car, £2200, buying new body panels and sills, which are still in their boxes, as well as various other bits and fixings. Mechanically, the car is absolutely solid, but it just needs some TLC on the bodywork and I am in no position to carry this project on.

What do you all think would be the best course of action here?

I was offered £1200 recently from an enthusiast in North Yorkshire but was let down at the last minute, so I know what it’s worth, and I don’t mind taking the loss, but I’m still in two minds.