I’m lucky enough to have received the first copy of Motorpunk, how can I best describe it, magazines like they used to be (in a good way). Imagine Top Gear the TV programme before it became a pastiche supporting presenters embarrassed that they were still getting away with it… OK, so that analogy was going badly wrong, hopefully you get the idea that this is a quality publication, the writing is done well and with humour, the choice of subject matter interesting and the paper and print quality is exceptional, it’s more like a book than a magazine.

Available from Performance Publishing, single issues are available as well as the 4 issue subscription. http://www.performancepublishing.co.uk/ 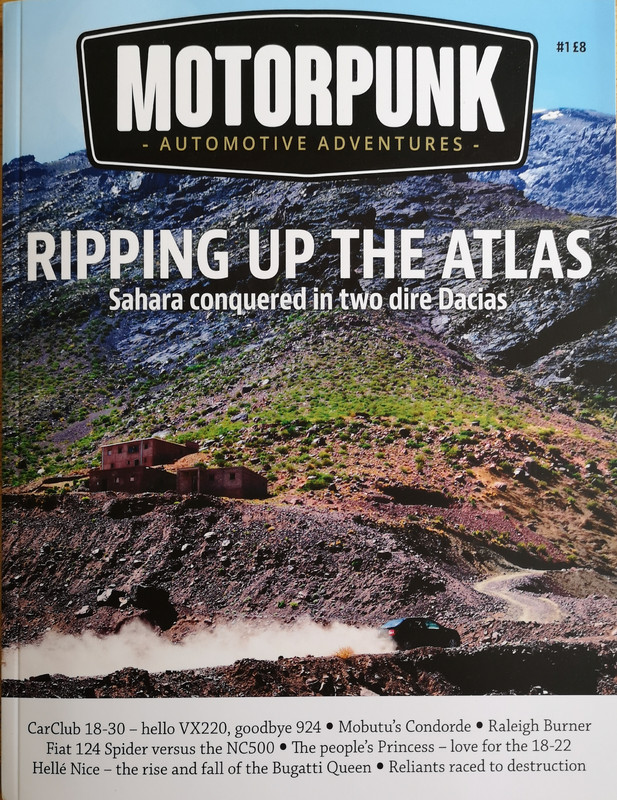 That’s a bit too expensive for me, though it looks very good and as usual you get what you pay for.

That’s a bit too expensive for me, though it looks very good and as usual you get what you pay for.

7p a page, I did hold off committing initially based on the headline price, so far I’d say it is VFM for the content.

Who edits and writes for it please?

Ah! Thanks!  I have wonder about the choice of company name.

And why they ended up in the MX5 game? They sold 7" headlamps, without a sidelight fitting, perfect for MX5 owners. Back then, it was actually quite hard to find a decent 7" headlamp that wasn’t for a Mini. Halfords stocked Triumph Herald sealed beams, but these were only 40W.

Then Val brought up vast stocks of surplus stocks of new Miata parts from a place in the US.

Who edits and writes for it please?

More details available from the link, the people behind it have a history of online publishing in a similar style: http://www.motorpunk.co.uk/

Only one person can decide that.

Only one person can decide that.

And clearly that was a rhetorical question. . But as it was taken as a literal question (ie. I am the sort of person who needs a forum to decide for me how to spend my money), I will explain.

The reference to “Austin Wedge” should have made that plainly obvious; combination of price, disparaging reference and question mark. No I don’t feel its worth spending £8 an issue for a superficially glossy publication full of pretty pictures, celebrating automotive mediocrity. I want to read about Setright ruminating on the reverse synchromesh (!) on the then new Miura during a 1000 mile test drive. I want to read about O-Rourke racing a (sic) “ass-engined Nazi slot car” (aka Porsche 930 Turbo) at “around 225 percent” of the speed limit,  in a Ferrari, during a coast-to-coast treatise on the fate of Western civilisation.

if the lowly Italians, the lamest, silliest, least stable of our NATO allies, can build a machine like this, just think what it is that we can do. We can smash the atom. We can cure polio. We can fly to the moon if we like. There is nothing we can’t do

I want someone to relate to me an experience that can only remain a dream and to educate, though some profound insight.

Instead the cover article talks of some holiday  to Marrakesh, and a day trip in a couple of hire cars. Ok, so I’ll book a holiday through Thomas Cook, and remember their trail notes. I imagine they are inspired by O’Rourke, and his piece on rented cars (from “How to Drive Fast on Drugs while getting your Wing Wang squeezed and not spill your drink”). They haven’t read the whole article, just picked up on the cribbed quote from wikiquote (like everyone else). Republican Party Reptile sits on my library shelf.

Even more important than being drunk, however, is having the right car. You have to get a car that handles really well. This is extremely important, and there’s a lot of debate on this subject – about what kind of car handles best. Some say a front-engined car; some say a rear-engined car. I say a rented car. Nothing handles better than a rented car. You can go faster, turn corners sharper, and put the transmission into reverse while going forward at a higher rate of speed in a rented car than in any other kind. You can also park without looking, and can use the trunk as an ice chest. Another thing about a rented car is that it’s an all-terrain vehicle. Mud, snow, water, woods – you can take a rented car anywhere. True, you can’t always get it back – but that’s not your problem, is it?

Yet there’s more to a really good-handling car than just making sure it doesn’t belong to you. It has to be big. It’s really hard for a girl to get her clothes off inside a small car, and this is one of the most important features of car handling. Also, what kind of drugs does it have in it? Most people like to drive on speed or cocaine with plenty of whiskey mixed in. This gives you the confidence you want and need for plowing through red lights and passing trucks on the right. But don’t neglect downs and ‘ludes and codeine cough syrup either. It’s hard to beat the heavy depressants for high-speed spin-outs, backing into trees, and a general feeling of not giving two f**ks about man and his universe.

And the article concludes about mortality, not taking a chance and a wasted life, so nothing really to do with rental cars. But a potted quote, removed of context, inspires a pair of young writers to take a package holiday to a relatively safe part of the Middle East, and take a relatively decent pair of hire cars, and drive on something suspiciously looking like a quarry.

Yes, but where does it all end? Where does a crazy life like this lead? To death, you say. Look at all the people who’ve died in car wrecks: Albert Camus, Jayne Mansfield, Jackson Pollock, Tom Paine. Well, Tom Paine didn’t really die in a car wreck, but he probably would have if he’d lived a little later. He was that kind of guy. Anyway, death is always the first thing that leaps into everybody’s mind – sudden violent death at an early age. If only it were that simple. God, we could all go out in a blaze of flaming aluminum alloys formulated specially for the Porsche factory race effort like James Dean did! No ulcers, no hemorrhoids, no bulging waistlines, soft d**ks, or false teeth… bash!! kaboom!! Watch this space for paperback reprint rights, auction, and movie option sale! But that’s not the way it goes. No. What actually happens is you fall for that teenage lovely in the next seat over, fall for her like a ton of condoms, and before you know it you’re married and have teenage lovelies of your own – getting felt up in a Pontiac Trans Am this very minute, no doubt – plus a six-figure mortgage, a liver the size of the Bronx, and a Country Squire that’s never seen the sweet side of sixty.

Kind of know what the article is going to be about, because its been trumpeted on Facebook and Instagram for months.

In a way “How to Drive Fast on Drugs while getting your Wing Wang squeezed and not spill your drink” explains Clarkson et al’d recent behaviour. They’ve reached late middle age, and realise it was a life wasted, and are now trying to make up time.

I wish them the best of luck, but they are not going to get my money until they raise their level of writing and insight. It takes time though.

Must admit, Setright was about the only part of Car magazine that I found almost unreadable back in the day

when I could hardly wait for each issue to come off the press.

Actually, I drove around for about 10 days in one of those Wedge Princesses back in the mid '80’s.

I’d returned from working abroad on a 2 week vacation, and needed transport to get me around to sundry family.

Rented the Wedge from Rentawreck in Southampton. Car wasn’t a wreck, just several years older than one would

get at a mainstream rental outfit.

As a family car, I rather liked it. Plenty of space, brisk enough. No complaints at all.  The beige upholstery not quite to my taste, but hey.

The only blot on the 10 day landscape was that my ex live-in partner had agreed to move out of the house just before I arrived.

She’d had a few parties, and placed the detritus in about a dozen big black bags, and stored them in the garage.

First thing I did after I’d collected the Wedge, was to load the black bags into it, and take them to the dump.

On the way, a bag leaked some, I think, rancid milk. In the hot summer, the car soon reeked of it.

The number of times I cleaned out the back of that car trying to get rid of the smell.

I did eventually manage to reduce it to a kind of ‘only creeps up on you after 10 or 15 seconds…’ experience.

At which point I returned the car to Wrentawreck, handed over the keys, “Thank you very much, nice car, really enjoyed it”…,

and left the scene quite quickly.

But, yes, I rather liked the Wedge.

Well , Setright was the master in my world , as was the brilliant Russell Bulgin . Hon mentions to David E Davis (with Pete Lyons . Tom Wolfe and Sam Posey one of my favourite US writers ) Roger Bell, Phil Llewellin and one of the CAR originals , Doug Blain.

I get very tight lipped at some of the bilge emanating from the likes of Dan Prosser , a stranger to grammar and syntax . If I read 'sat ’ instead of 'sitting ', or ‘likely’ instead of 'probably ’ I start throwing things…

But I enjoy Stephen Bayley’s erudition,and the rare occasions when the brilliant Jonathan Meades writes about cars - his description of Daniel Richmond (founder of Downton ) and his toxic wife Bunty was a bloody hoot and features in An Encyclopedia of Myself . Highly recommended