Should I use the AGM mode of my Bosch C3 charger?

Hi, I need this info ASAP: I have the Bosch C3 trickle charger, and am unsure whether I should use:

Mode 3 | 12 V (14.4 V / 3.8 A)
Suitable for batteries with a capacity of more
than 14 Ah in normal state. Charging mode for
WET batteries and the majority of GEL batteries

This is urgent - please help

If the battery has filler caps for the cells, and you can see the liquid inside them, then it is a WET battery, and you should use the lower voltage Mode 3 (14.4V)

Have a look to check the battery if you are uncertain.

Choosing the lower voltage will guarantee you cannot overcharge the battery. It is far better to take it to (say) only 80% (which is how it might normally sit most of the time with iStop, iELoop etc) than to boil it. 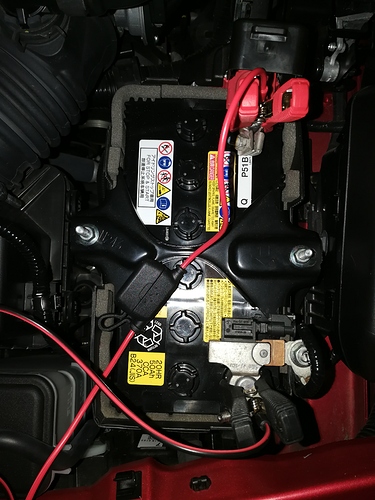 Hi M,
Personally I would not put the - directly to the battery as you have. Good practice is to use a bolt on the body, there is one near the suspension top mounts.

Personally I would not put the - directly to the battery as you have. Good practice is to use a bolt on the body, there is one near the suspension top mounts.

I’ve never seen any explanation for this. I don’t know why this is so often quoted for such charger connections or what it is intended to achieve (or avoid). The battery negative and the body are connected by a cable with large cross section so are electrically identical as far as the car’s systems are concerned.
However, the usual reason for making the negative connections to the body is, in my understanding, related to connecting a slave battery for jump starting. Connect the positive connections of the two batteries first and then connect the negative of the ‘helper’ battery to the body. Why? The car battery will have been hard used to try to start the car and may have gassed off some hydrogen. Connecting the helper battery may cause a small spark. Making the last connection remote to the battery ensures any spark is away from the car battery and any hydrogen that may be present. In the worst case where a mistake is made with polarity an extremely large spark is created well away from the car battery.
You may guess from this where the lead for my CTEK is connected on my car…

Interesting.
My 3 series has special contact points for attaching jump leads. They are located under the bonnet, presumably for convenience and accessibility but they are also well away from the battery, which is in the boot. Its a sealed AGM battery, so little chance of gassing I imagine.
I have been using these contact points for occasional smart charging.
Given that there is an integral charging programme for the stop/start battery, is it advisable to use these contacts for charging I wonder.??

Yes, 3 series with battery in the boot has terminals under the bonnet simply for accessibilty. Don’t want to empty a boot full of luggage for a jump start. I’d use them for charging as they are convenient. No point in diving into the boot.
JS

If your BMW is of the start stop variety, there is a computer that monitors the battery and the charging it gets so it correctly calibrates. Using the posts in the bonnet area is the correct thing to do as it does not bypass this monitoring.

Allegedly. … connecting direct to the battery can shorten battery life.

No idea if this also applies to Mazda…

I have copied this from another thread as it may help the original poster understand some of the reasoning.
If you do have any issues with stop start not working because of the battery (Your display will show which of the 3 elements are stopping it from working.) try disconnecting the earth from the battery for a few minutes.
This is for the ND1 so not stop start. https://www.mx5manual.com/page.html?docid=SM352783 The note about opening or closing the doors with the battery disconnected is ‘interesting’.

Here is a poor picture

It is good enough.

That is a WET battery (EFB type). The yellow sticker gives its ratings, including B24 JIS shape.

Use the lower charge voltage.

If your BMW is of the start stop variety, there is a computer that monitors the battery and the charging it gets so it correctly calibrates. Using the posts in the bonnet area is the correct thing to do as it does not bypass this monitoring.

That’s not what CTek told me. I had a BMW E93 M3 with stop/start and an AGM battery in the boot. It obviously has BMW’s IBS (Intelligent Battery System). Because of the configuration of the garage that the M3 lived in, it was more convenient to connect the charger at the rear of the car (via a wired-in comfort connector) than at the front.

I did use the expression 'allegedly ’

Lots of debate about this on BMW forums (I have an F20 M140)
Only thing for sure is that using the bonnet connectors is fine.
Direct battery connection MAY be fine.

Difficult to say if it is important or not when the difference may be between a battery lasting seven years or five.

For most modern cars, particularly those with stop/start and Battery Management System (like the BMWs), the earth should be to a dedicated body terminal or other ground so as to mitigate spikes.

Don’t forget to disconnect it when you reverse out of the garage though.

The OP of this thread again here - hi to all, and thanks for your input. I’ve driven dozens of various cars for some 50 years now, but must tell you my Miata’s electrical system is by far the least matured and full of nasty surprises. I’m from Poland, so of course I do have all this i-Eloop voodoo - and while its main idea of more efficient energy recuperation looks attractive on paper, in reality I am already running the third battery since the car is new!.Here’s the story:

This way, I’ve had 2 batteries replaced (which makes it 3 including the original one), and the Service people seem unable to repair it. The car still has warranty, so I escalate the problem to their workshop manager. He invites me in after a couple of days, and says that probably none of his employees had told me, but the thing is after the battery charge drops below certain threshold, the i-Stop is deactivated; it’s not enough to charge the battery full - the system must initialized which happens automatically after some 30 km of highway driving, or can be performed at the workshop using some simple procedure on the diagnostics computer.

So I’ve charged up the battery again over the last night, and going for a relaxed tour for the “automatic” i-Stop system initialization Will let you guys whether it works or not - but I can tell you already that even if it does, I don’t like it at all, because it would mean that the whole i-eLoop recuperation system (which i-Stop is a subsystem of) only works properly when driving outside the city using high RPM all the time, and probably in the summer only…

What do you think? I somehow don’t believe it really has been designed like this, and my car is somehow faulty, after all (a short circuit not seen by the diagnostic equipment)?

Hi P,
Next time it ‘fails’ try disconnecting the - terminal from the battery for a few minutes and reattach. My theory is that this resets everything. Please report back if you try this.

This is an interesting description on start stop battery requirements.

What surprised me was it looks like you have a standard top up style wet battery, which, as per this article will fail prematurely in a start stop car. Maybe you don’t, maybe you have the correct battery, (I am no expert, just saw the top of the battery and assumed it was a standard battery from the top up caps) but can you can check any serial numbers or codes to make sure it is an appropriate fitment?

My MX5 doesn’t have stop-start but my diesel 3 series has and the battery is enormous.
The downside of an enormous battery is that it takes a very long time to charge again once it has got low
I suspect that your overnight charging may not be enough.
During the first lockdown the battery got very low and it took about 3 days of daytime charging before the smart charger finished its job.
I don’t know if its possible with your Mazda but I have taken to switching the stop start off - its more trouble than its worth.

The Mazda stop/start does not work like some others. There is no requirement for a second battery. Regenerated electricity is stored in a capacitor not a second battery. When the engine stops it is controlled such that a fully charged cylinder is just at the point of being fired. When a restart is initiated this cylinder is fired and so starts the car. The starter is only a supplement to this process so a normal battery is deemed sufficient.
On stop/start, i-eloop cars the earth terminal is very different. I suspect it has a volt measuring system within it that gets confused and does not send out the correct messages which in turn tells the display that the battery is the problem when in reality it is fully charged and ready to do its job.

So perhaps there is something to it, after all? Isn’t the device directly to the right of the negative terminal the “volt measuring system” you mention - meaning I should have clip the negative charger cable to it rather than to the post itself (as seen in my picture above)?
P.

I would attach the black connector clip to the chassis, suspension turret bolt or similar. The charger will indicate if you have found an earth or not (i.e. it will either work or it wont). That way, you are not bypassing any electronics by using a direct connection.