Something to jog memories for us old bikers

Christmas is coming, and after reading the article in this month’s Classic Bike I’ve asked my family for this self-published book on the Unit-construction BSAs (alas, not cheap at £25 +P&P) .

Admittedly my BSA was a pre-unit A10 Flash, but it gave me happy memories. This book gives us the background to what was going on at BSA at the time from first hand accounts as well as lots of interesting pictures.
Here’s a fuzzy 1968 pic of my 1961 Golden Flash, minus fuel-tank badge and plus the usual leaky oil tank. 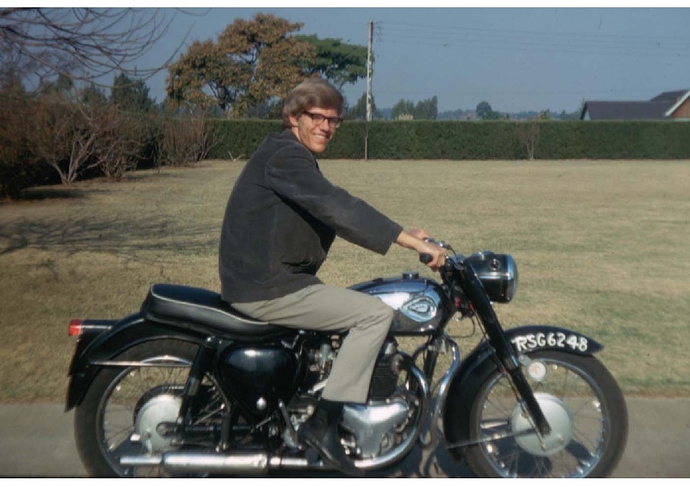 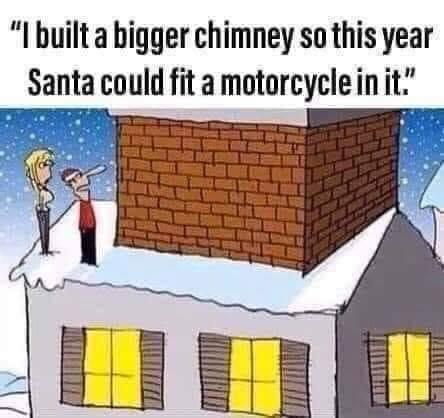 Nice, I love the old bikes. They dont make them like that anymore!

I’m a child of the Japanese era, old Brit bikes just don’t really float my boat the same tho’ there are certain models that are iconic no matter what. My Dad was a Norton man with a 350 Manx and 500 Dominator amongst his fleet. Mind you, I’ve enjoyed visiting the National MC museum and Sammy Millers place at times.

Nice bike Richard FX, and many happy memories I hope. This is a subject close to my heart, and I know there is quite a few ex bikers within the OC , me included.
As much as I love modern bikes, I was brought up on old British bikes and have a certain respect for them as my Dad owned many over the years , I remember many a time getting on the back of his Vincent Rapide, sans helmet, ( once he had gone through the kick start ritual ) and riding over to the parts mecca that was Pride and Clarkes , in Tooting I think it was.
When my brother came along it was then a Panther sloper with a 2 adult Busmar sidecar .
Here are a few pics including one of my Ol man, with a Norton 16H that he rebuilt over many years which has got quite a story to it, although I won’t go into that now! 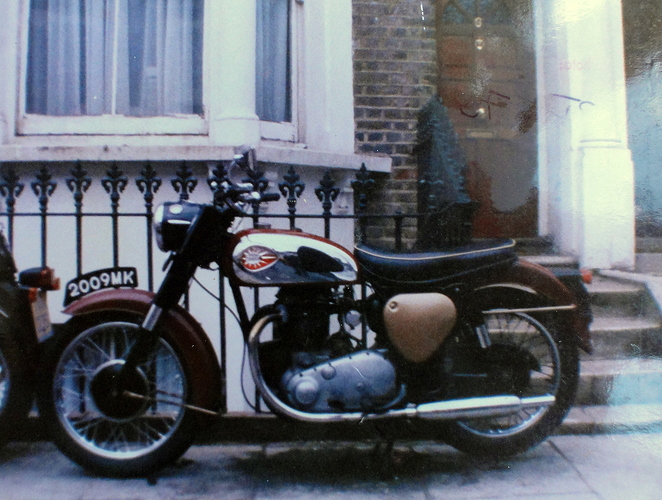 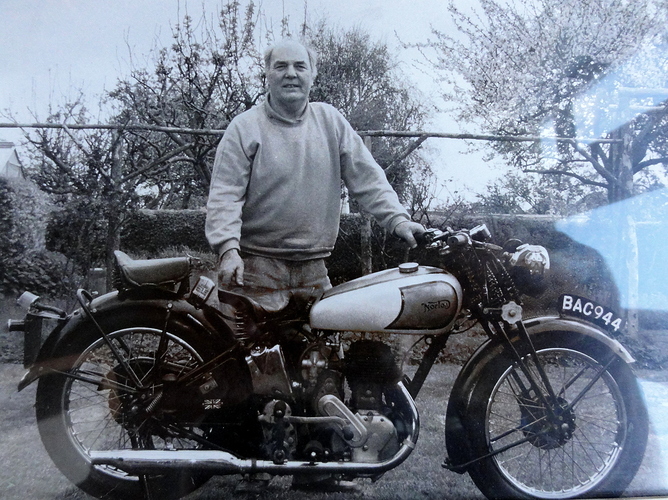 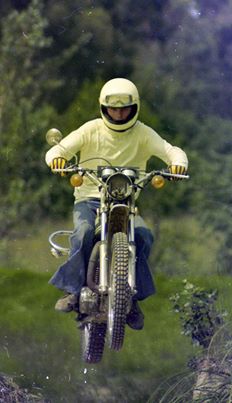 My Old Yamaha 360. minus headlight!

I had a 1964 A65 Rocket, siamese exhaust and twin leading shoe front brake. When it was running it was great but by 1973 I was spending more time repairing it than riding it. Cracked gearbox casting, electrical wiring faults, oil leaks, etc, etc.

I had the A10 oil tank top lug brazed up three times in almost as many weeks, but it always cracked again in the same place, simply because the frame was flexing and the tank mountings were too rigid.
If I had known then (but young and stupid) what I know now, I would have modified it with a rubber grommet inserted in the lug as a more forgiving system.
But in those days I assumed (wrongly) that BSA actually knew what they were doing.

This was the problem, we had dominated the market for a long time, and perhaps became complacent , then along came the likes of the Honda CB 750 and then the lovely Kawasaki Z900,and the rest as they say is History.
Although I like the new Triumph line up, and Aston Martin have also produced their first limited (concept? )motorcycle

I recon we would all love to hear the story.

At the time I had the A65R my work colleague had an A10 Rocket Gold Star, I think he actually still has it. These are quite rare with a 650cc A10 pre-unit construction engine fitted into a Gold Star frame.

Ok, I’ll try to keep it shortish.
Back in the late 60s my Dad bought this bike home in bits, there was the frame, and several old tea chests which contained 2 engines and 2 gearboxes partly dismantled and all the rest of the bits and pieces, it remained in the attic until the late 70s , but then whilst working for the maintenance dept at Heathrow Airport he got the chance to get the frame, forks and various other bits stove enameled, then several years later he had the tank re furbished, but was never happy with the job done , so it went back into the attic.
Fast forward to the early 90s, my Dad retired and my parents sold up and moved to a bungalow with a garage, this became his second home, where he started to re build the engines and gearboxes, and sent the tank off to a specialist who done a grand job, over the years it all came together, in between tinkering with an old BMW LS650 he had bought, he finally got it running around the late 90s and rode it once, as ill heath and his age took its toll.
He decided to sell it and continue dismantling the BMW which he loved doing, and forgot about the Norton 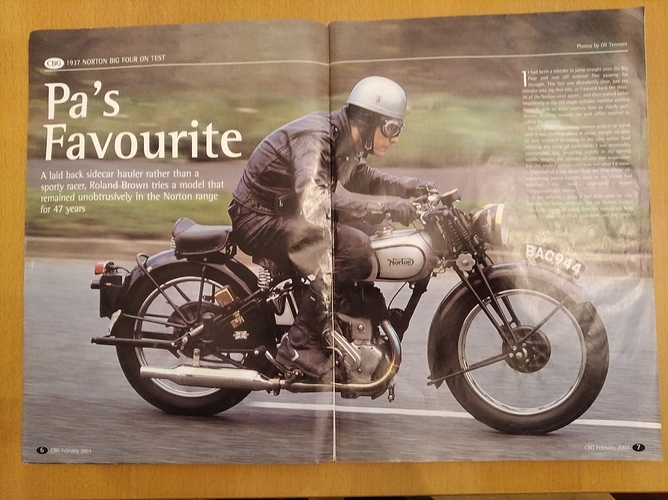 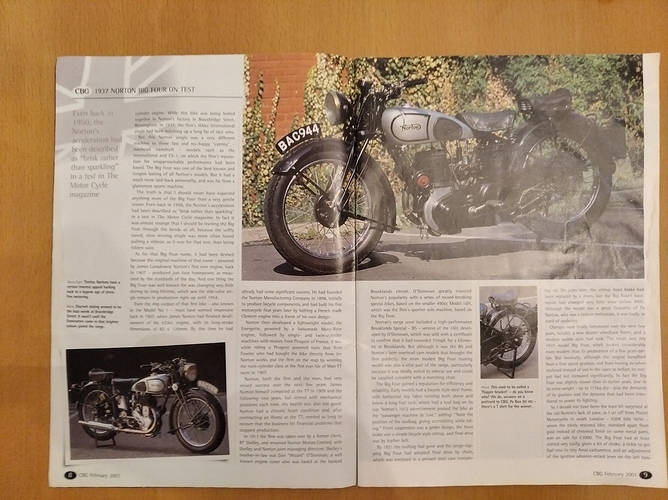 IMG_20201202_1838452016×1508 1.27 MB
Some years later I got an exited call from him saying his old bike had appeared in The Feb 2003 Classic Bike Guide Magazine, I bought and kept the magazine and there it was over several pages in all its glory, and he never did get to figure out what the 2 lugs where at the bottom of the frame at the front, we thought probably sidecar mount fixings ? he died some years back, and unfortunately I never did get to ride it . 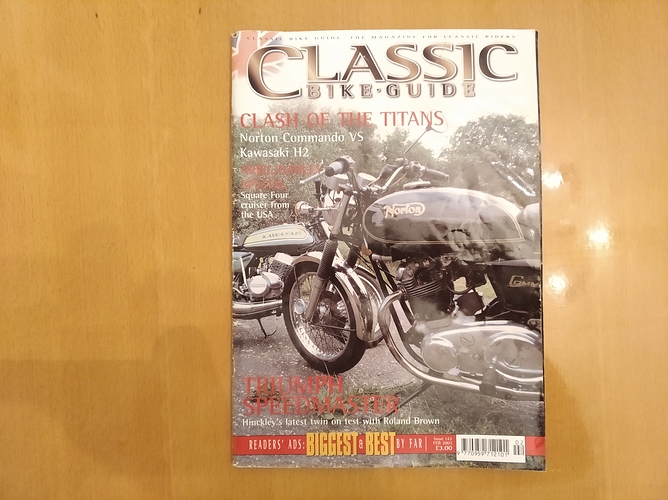 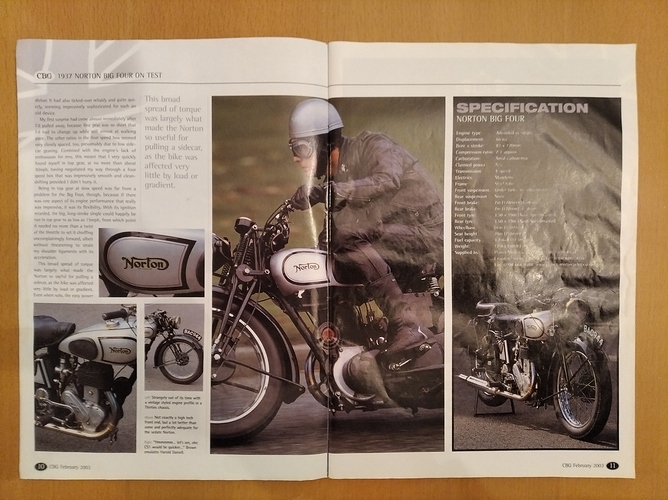 What about a nice custom 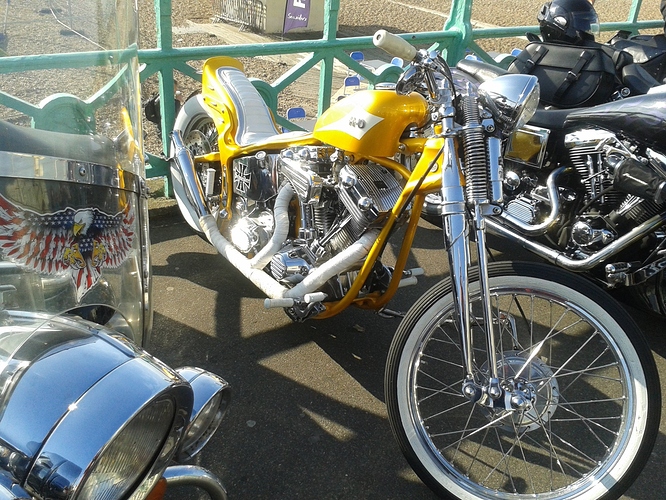 Back in 2014 I had saved up enough for a new Triumph built to order direct from Hinkley, with a complete set of modern riding gear, but instead blew much of it on the immaculate Niseko.

With hindsight I think this was a wise move (now older and not quite so stupid). SWMBO often reminds me that elderly born-again bikers often don’t last long, especially on crowded London roads.

It’s very interesting to look back on some of this stuff.but it was all pretty dreadful really this stuff we had to ride around on. They don’t make them like that anymore, well thank my lucky stars for that. Give me a. Modern bike anyday, at least you had a better chance of making it back home after a days rideout.

I quite like customs, I used to go to the Kent Custom bike show at Romney Marshes years ago with a bunch of mates, but never owned one ,but I had a Kawasaki VN800 v Twin cruiser for a few years , nice bike , and comfortable.

Good point, I was hankering after another bike , but we had both been looking at MX5s for years, as we had a Spitfire in the early 80s and absolutely loved it, so we thought the MX5 was the way to go, I’m in my early 60s and I don’t think my missus would trust me tearing around on another bike, but we made the right choice as we are always out and about at weekends , lid down, and loving it, but I will always have a liking for bikes as well