Do these look ok for NC? They look a bit short. 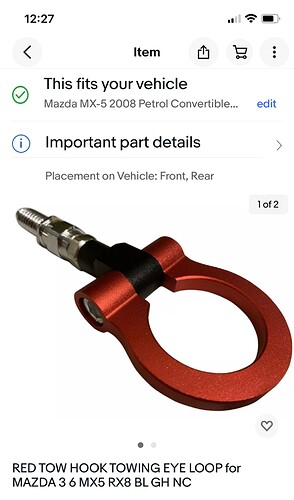 picture maybe generic but no they dont look ok primarily because of the aluminium eye. IMHO they are just for looks rather than function. I still use the OEM tbh

Thanks, the car didn’t have the OEM when I bought it. Just ordered a used one from eBay to try out, as there does appear to be a bit of rust in the socket when I took the cover off. I hope there’s some thread in there

What is the thread size for the NC? M12?

It doesn’t really look like a standard machine screw thread if I’m honest. Its much bigger than 12mm i think its around 20mm thick if not more.

Just to let you know in my car the crash bar under the rear bumper had so much corrosion that the thread where the tow bar threads are, has gone. But the front one is fine. So if you haven’t yet taken the rear bumper out, clean the rust from the crash bar and recoat i suggest that to be your next job to do on the car