Can anybody tell me what is the model specification of the original equipment Enkei alloys fitted to the VR Limited?

Second question, can anybody point me in the direction of a set or are these now rarer than rocking horse poo?

Thirdly, any suggestions for alternative wheels? Currently runs MkII Sports Enkei in shadow chrome finish which look good, are quite light but OE is ideally what I’m after.

The same wheel was standard fit on the last 1.8iS models sold in the UK; appears in the October 1997 brochure.

I never cease to be amazed at the depth of knowledge on this Forum. There’s little that can’t be answered.
It really is a fabulous resource.

Thanks for the info, I’ve had a look at some images of the '97 MX5 1.8iS, mainly these seem to be fitted with a 7 spoke not the 5 spoke Enkei on the VR Limited. @saz9961 was there a five spoke version you’ve seen? Thanks!

How’s your Japanese?…might be some info on there.

Thanks for the info, I’ve had a look at some images of the '97 MX5 1.8iS, mainly these seem to be fitted with a 7 spoke not the 5 spoke Enkei on the VR Limited. @saz9961 was there a five spoke version you’ve seen? Thanks!

I did say the October 1997 brochure, which I have in front of me which certainly show the standard wheel for the 1.8iS at that time to be the 5 spoke 15" Enkei wheel. You have probably looked at early 1997 car, pre- that final revsion (ie. a Mk1 on an R-registration) 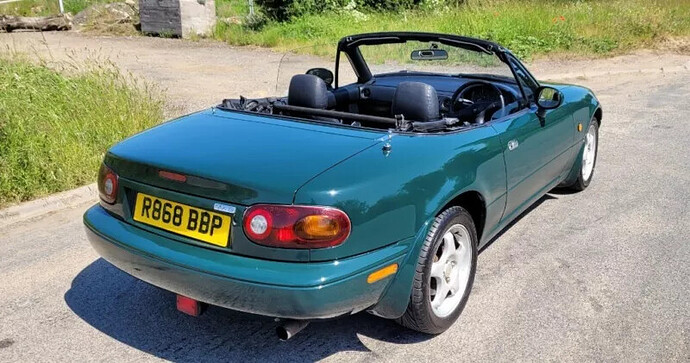 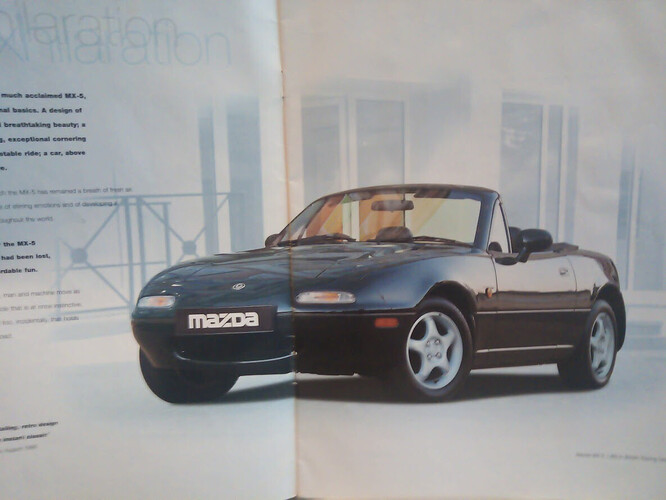 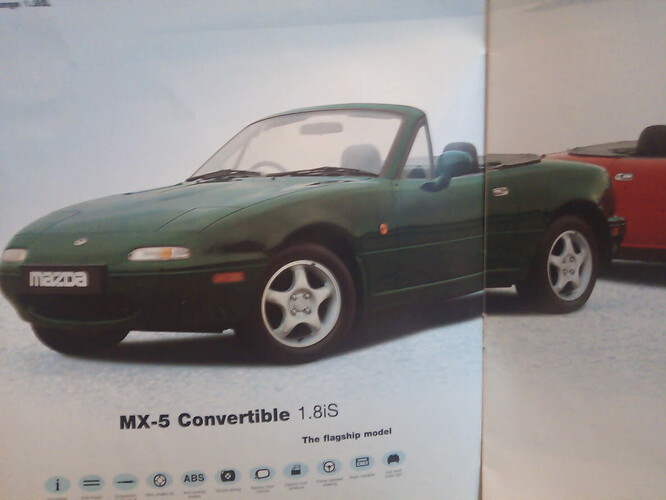 In 1997, Mazda Cars Ltd also offered accessory wheels. These were by Fondmetal, I think 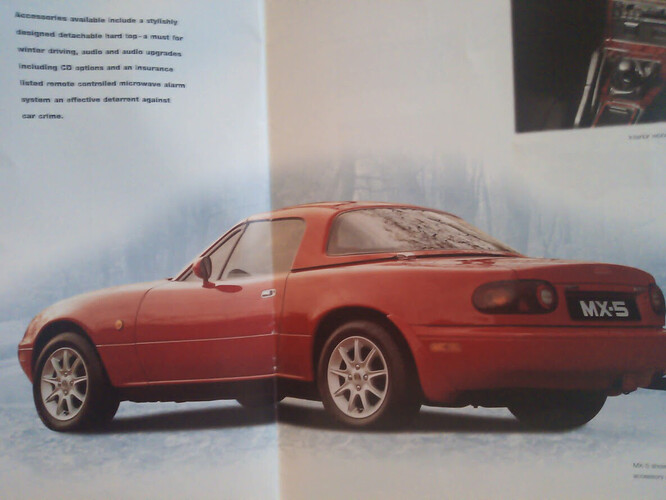 In the UK, you could get a car from Mazda with factory fitted wheels or locally fitted accessory wheels. While the accessory wheels would be within the tolerance of what Mazda intended, things like offset are off.

Besides the UK, the same wheel was a fitment in other European market MX5s, as well as the runout US Miata STO (“Still the One”) and 1996 M-Edition Miata 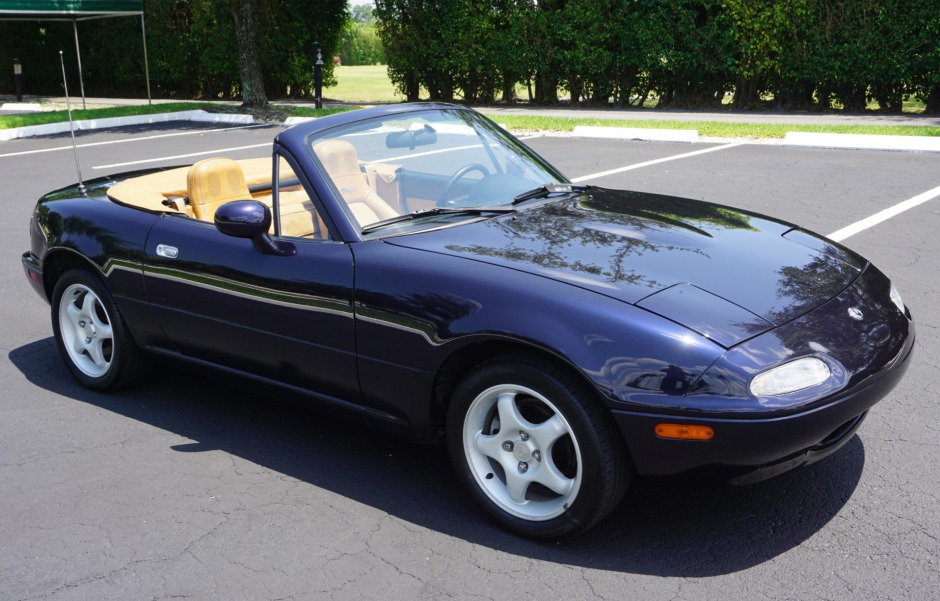 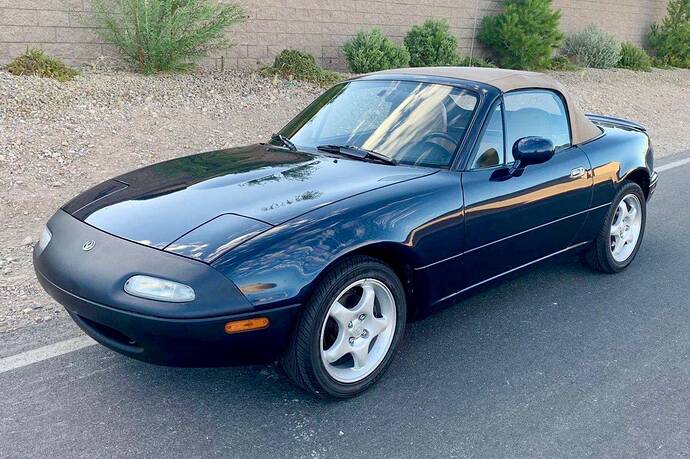 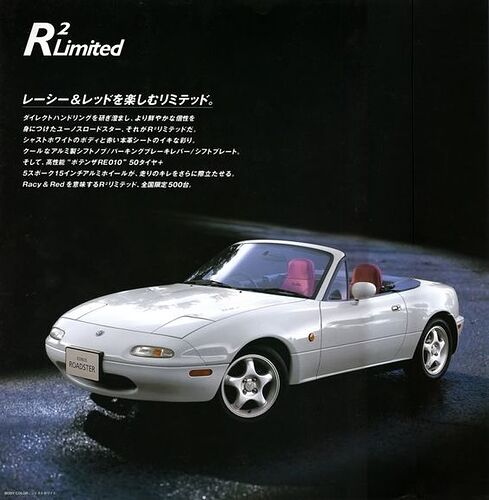 The original question asked for the “model specification” of the wheels fitted to the VR Limited; the specs given come straight from the Mazda catalogue. I would think given the number of cars fitted with the design, the wheel is unique to the MX5 Miata, and is not an aftermaket design.

Therefore if you want a 15" wheel that meets the original technical spec your choice is either the Enkei fitted to your VR-Limited and the R2 Limited (and last of the line UK 1.8iS, 1996 M-Edition, 1997 STO), or a 15" BBS that was fitted to the RS-Limited, R-Limited and the S-Special Type 2.

There are various services that can buy parts for you on Japanese auction sites. You can also find them on various US used parts traders; eg a pair for sale here in Florida

One wheel for sale: 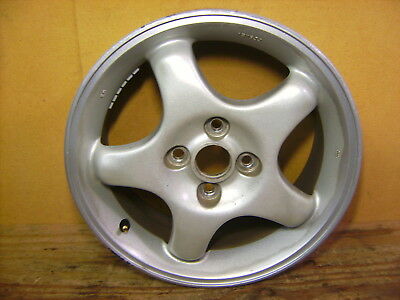 Realistically, you are probably going to have to wait a long time, or spend a lot of money to get either the Enkei wheels or even a complete set of Mazda-spec BBSs.

The alternative is something aftermarket that sort of looks the same. Or better, the Enkei fitted to several NB models; the offset is 40mm, and these are a Mazda part 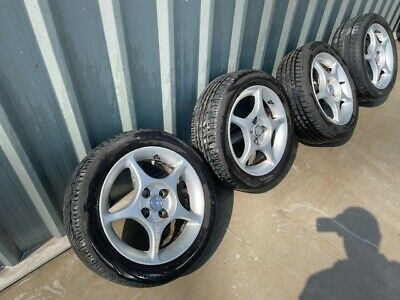 There are loads of these available. Note, in Japan, Mazda offered a white version that was forged (very light) for the NRA edition. These should not be confused with the white Enkeis that flooded the UK market, which are not forged (look the same but heavier); the origin story is either these were for a 323 special edition that never happened or they were intended for the “Angels” special edition MX5, but Mazda UK changed their mind.

How’s your Japanese?…might be some info on there.

Gives exactly the same info as the UK Mazda brochure.

Wow, super detailed info. Thank you @saz9961 You must be the MX5 guru!

Well by pure happenstance, good luck and timing I now have a set of original VR Ltd Enkei wheels

A refurb is needed so I’m keen to hear of any recommendations in the Glasgow area.

I’ve had lots of wheels refurbed over the years, but I’d have to say that the re-colouring refurb done by “We Restore Alloys” in Kirkcaldy was the best I’ve seen yet, so I would recommend them. They have a place in Stirling too. 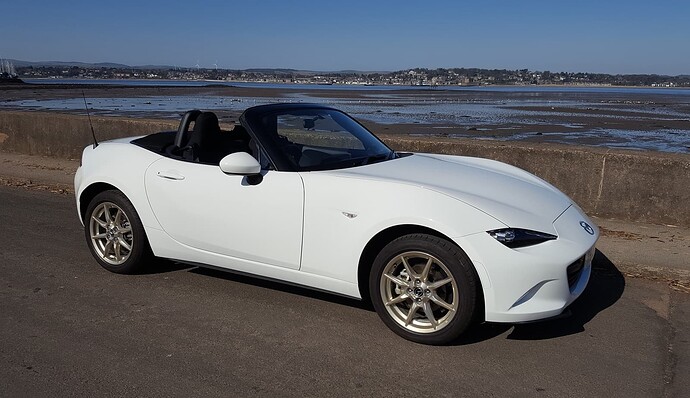 Super, thanks for the recommendation @John_R_Hunter and yes they certainly look the part

The downside is that they are not cheap, but as with all things in life … you get what you pay for!

No sure about recommending a particular place, but I would recommend paint over powdercoat. Besides the well known issues concerning some powdercoating processes (where the wheel is overheated), if the powder coat is damaged (and its not as indestructible as some suppose), its extremely difficult to strip back, without damaging the wheel itself (essentially, its a layer of plastic applied to the wheel). If the wheel has been hard to find, or would be difficult to replace, that’s something to consider.

Thanks @saz9961 that’s useful to know especially given the wheels are generally in really good shape, very light surface corrosion from storage and some minor kerbing on two wheels.

I’ve given one of them a tickle with some wet and dry out of interest to see how much prep they need and looking good aside from the kerbing marks which will need a small application of filler I think then sanded back. I wouldn’t tackle this myself usually as I know it is really hard to achieve a good finish on alloys but given they are in great shape to start with it is perhaps worth pursuing.

A proper restorer will tig weld the rims, spin flat, and not use filler. You could probably rate a repairer by getting them to talk about what they will do at the various stages

Interesting the powder coating versus wet painting consideration. Hard to find the latter, seems 90+ percent of alloy wheel refurbishment outfits use powder coating but I understand the principle of heating a wheel could weaken it if not very tightly controlled. I guess a good body shop should be able to carry out painting a wheel. Mine are ready to paint except getting the rim perfect on two wheels which has very slight kerbing marking visible after wet and dry sanding. I think just hand them to a good body shop might be the better route from here as long as they attend to the markings on the rim.

6th reply down, the poster had some split rim wheels powdercoated in 2008. By 2013, when I got hold of the wheels, they were needing redoing. The powder coat hadn’t been affected, but because the owner wanted a gold finish, the company restoring the wheel had to put a clear lacquer on top of the powder coat, because the powder coat doesn’t really have a shine (its not a paint).

The lacquer then failed (chipped, moisture got under the lacquer, ruining it. But it wasn’t a case of stripping the lacquer and being left with pristine, but flat, gold lacquer. Trapped water, or whatever, had reacted with something in the powdercoat to turn it green. I’m guessing copper or something was used as a colourant, and it oxidized.

Normal paint stripper won’t touch powder coat, nor will a wire wheel. In the end, I found a fairly potent paint stripper that softened most of the powdercoating. But I lost heart with what was going to be a summer lockdown project, so someone else can finish it. I have a set of BBS wheels to refurb. No way am i going with powdercoat. I’ll use the place I had some M2 Panasports refurbished in Leicestershire.