When I bought my car about 6 years ago, it had a brake judder. Sort of speeds up or slows down with rotational speed.
The rear discs looked new ish, and there was a reciept for them being replaced maybe 18 months prior to me buying it, so my first winter job was to replace the front discs.

The problem was still there.
Time is not good on my memory.
So I probably spent the next year trying to figure out where the judder was coming from and maybe put up with it for 18 months.
I then decided to replace the rear discs…
Yay… problem solved.
I’d suggest that with the amount of miles I do, the first season they probebly were not fully bedded in.

Last season, I noticed the judder coming back.
This season it’s worse than ever.

At the last MOT, I asked the MOT guy if he could pick anything up on his brake tester but it’s obviously not strong enough for that, but bad enough that I can feel it.

This week I’ve had both rear discs off to inspect and can clearly see a imprinted pad mark, probably where the hand brake has been on all winter.

I guess firstly, what is this pad mark, why hasn’t a few hudred miles of mototring scrubbed this out.

These discs have probably done less that 2000 miles in total.
.
I’ve considered buying just 1 disc and swapping from side to side to see if I can fugure out what’s going on.

Short of me replacing them again, any other ideas

This was my issue and it did give me a headache but sorted in the end.
Hope it helps👍🏻

Hi All, I’m looking to you good people out there to help me with my '61 plate Sports Black that has developed a brake judder. I have owned the car for the last 8 years and is always garaged and never had any problems. Now, from a cold start after a few miles of use, the juddering starts. It has only done 40,000 miles. I have replaced front discs, pads and caliper sliders. This did not solve the problem. I have also just replaced the pipes from calipers to the hard line which also failed to so…

a good result, but then how did you determine which caliper. It could be pot luck.

The pad mark is most likely due to corrosion setting in due to moisture and will have ate into the disc more than you think, so it won’t scrub out until they’ve worn down some more. Personally, discs aren’t expensive, especially solid rear ones, so I’d just replace them and be done with it.

Also don’t leave the handbrake on during a long period of non use.

Chances are you have a caliper with a sticky piston as you seem to have replaced all if not most of the other parts of your brake system including the usual culprits the slider pins. If you can get hold of an infra red temp reader then you should be able to see which one is getting warmer than the others. Additionally a sticky caliper piston which heats up the disc can lead to premature warping of the actual disc itself if it is under pressure with the handbrake applied for some time. As Mick suggests leave the handbrake off, if safe to do so, when parked for any length of time . If you can’t then chock the wheels and leave the handbrake off.

I could feel when driving which one, as its pulled to that side and was so much hotter than the others.
I also agree with the previous 3 members on their points👍

i’m not sure on a sticking piston to be fair.
when i’m not braking it rolls freely, I can just about move the car freely with a single finger.

I’ve an idea which I’m going to put to the test this weekend.
I’m going to soak the faces in 15% phosphic acid for 5 minutes, just to see what effect this might have, then the next steps are new rear discs again.
Brembos are only £26 each on ECP

I bought mine in 2016. 3 years old and just 6000 miles.
The rear discs were in a dreadful state.(Scottish weather!).
Inverness to Wiltshire failed to do anything with the discs and indeed a few more thousand miles.
The inside would just not wear and indeed clean the surface.
Changed the rears disc/pads with Ferrodo and have been perfect ever since.
Nothing wrong with the callipers by the way.
So as all above, change the lot would be my advice.

Brake judder is not caused by disc runout (warped disc) the slider pins will take care of that a to a certain degree. Brake judder, if felt through the pedal is caused by a difference in thickness around the face of the disc (so called variation thickness). This may be caused buy rust patches or excessive runout of the disc as the high spot on the disc passes the brake pads while released wearing the disc at that point.

Warping can be caused by a sticky calliper leaving the pad in contact with the disc at rest, meaning that when the car comes to a stop the pad and disc cannot cool naturally. Take your foot off the brake when you stop too. Rear brakes prone to this if the handbrake is applied when the pad/disc are very hot. MX-5s are prone to sticky rear callipers.

So I cleaned the rear discs with the rust remover, and on my intial drive, thought that was it fixed.
However, once the brakes got warm, the judder came back.

I only drove about 5 miles, and was pretty heavy on the brakes.

When I got home, I grabbed a laser tharmometer (i Borroed from work yesterday)

Now when I look further, the offside front has more brake dust on the wheel that the nearside, so again, something going on there.

I’m taking a look at this this afternoon

Caliper off, and I can hardly move the lower slider pin.
I did eventually get it out with a view to maybe cleaning and lubricating, however, the rubber sleeve on the bottom is riding up the sharft, so a set of slider pins required as a starter.

Sorry if you have serviced the front brakes during your ownership, you don’t mention it or it being done. Now you have found a possible problem with the offside front, getting hotter than the nearside. Suggests sticking caliper or slide pins. Someone mentioned the rears can stick, well the fronts can too, more so the amount of posts I see asking for help.
If it’s garage serviced then it’s not always practiced , or priced in the schedule to strip clean and lube (pins) brakes at each corner in every service. I make a habit of servicing them every year, it seems to work in I’ve never had a problem with them.

Yep and DONT use copper slip on the slide pins.

As in my Sport Black Brake Judder post early on this thread, I too changed the slider pins. Turns out it was the caliper bore that had gone oval through the extreme heat and was gripping the pins. A new caliper solved it.
You’ll sort it out👍

I trimmed a tiny slice off the rubber to allow me to refit and test again.
The lower pin now moves, but I don’t know how free it should be, it’s not as free as the top, but does move.
Same 5 mile stretch, same sort of hard driving style.

Difficult to perform on my own for fear of popping the piston out, but pressing the brake pedal with the caliper off and the piston went back freely with the rewind tool.

I guess it’s this you mean with the rubber sleeve. 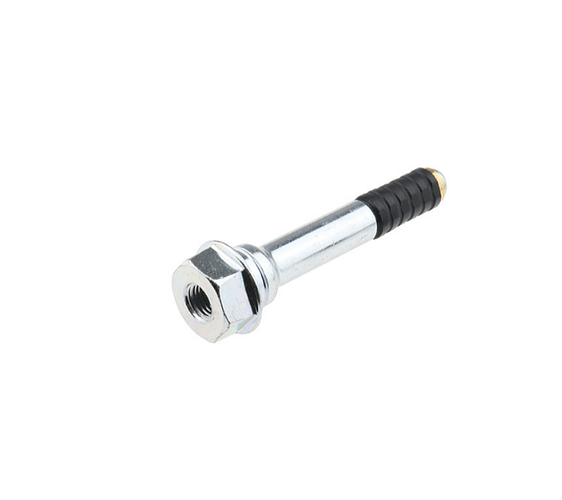 I’d clean out any crud where the pins slide into using WD-40 or similar, clean up then use red rubber grease for future servicing lube.
You’ve probably found the culprit, well hopefully.

It should now be part of your regular annual inspection to check the slide pins front and rear and if in any doubt clean and re grease them. Lack of use and old, possibly the wrong lubricant, causes major problems with all the sliders, particularly the ones with the rubber sleeves. These react badly if the wrong lubricant is used and start to expand and break up causing the problems you have experienced

When the carrier was in situ, i couldnt move the lower pin. With a 17mm socket, i could rotate it, and eventually it pulled out.
I wiped it down, and swilled the bore with WD.
But trying to refit the pin, that rubber sleeve started to move up the shaft, until it came out of its slot and the pin wouldnt fit.
I reckon that the rubber has deteriorated with age (could be 17 years old) and swolen.

Ill report back more findings in the week.