Hi , i need help with my imac , its running so slow

i have next to zero computer skills , its only used for coming on here , trader , f/book , music emails and photos really .

Are these CLEANMYMAC free sites any good ??
what about a FIXMESTICK. ?

If anyone can help / explain in VERY basic terms ,whats my best options …PLEASE
cheers guys

What year iMac and current software version?
Has it just suddenly happened?
Is there an upgrade available?
Free HD space available?
Wi-fi running slow?
If not done already re boot first.
Be very careful with those clean my mac sites etc.
“Generally” iMac software is pretty secure regarding viruses etc

hi , thanks for reply , as stated i really am a techno-phobe , but ill try and answer the questions .

sorry about the poor answers but thats my computer limit

Generally you set the software update to auto or manual. Go to top left and about my mac, scroll down to software update and check where you are. With regards available HD, usually if you open the finder the available Hd space is shown at the bottom, try and keep around 20% free. There’s a free bit of software called onyx, download that and run it, it usually cleans out a lot of accumulated rubbish and frees up a lot of space. 2014 is young enough to be fast enough

but certainly a few shut down cycles will help

Some good replies there to help👍
One thing I did learn with my Mac.
I have BT internet and loaded the free antivirus software. For me that slowed my new iMac at the time “considerably”. Took it off as you don’t really need it with these. Unlike Windows based PC’s. But as you say if you don’t know your way around that could be difficult to find out what you have loaded. I am sure between us we will hopefully be able to advise, help and get it going 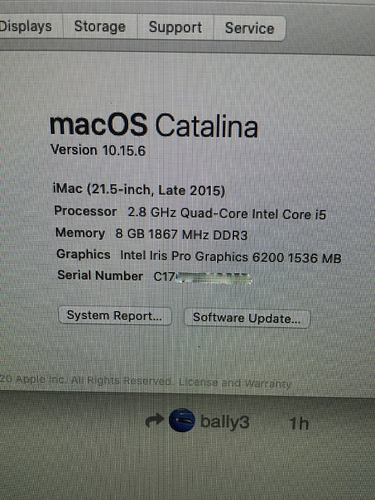 cant see where HD space is ??? 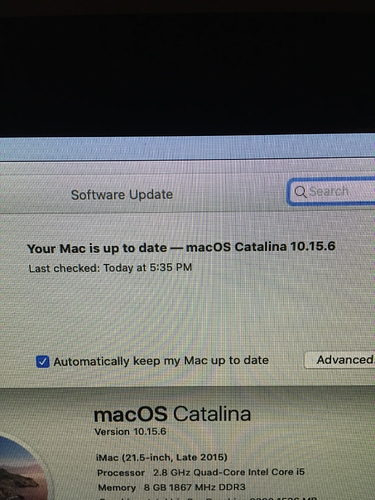 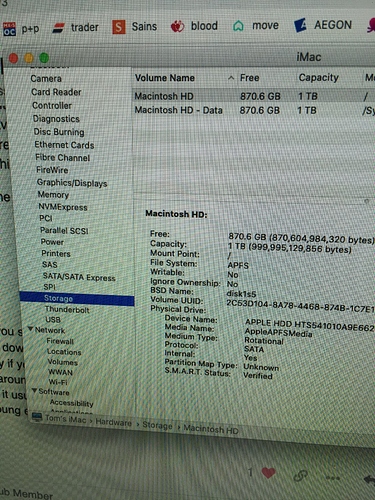 Well what I CAN tell you is this.
You have now upgraded to the 64 bit system Catalina. Which in my opinion is why yours IS slow.
Which is what I have done, but wish I hadn’t.
Mine is also slower and like you find it a pain.
Mine is 2016.
All the previous apple software is 32 bit and is quicker.
Likewise, not all current software for iMac is 64 bit either. Tom Tom for example just doesn’t work at all even though they say it does with Catalina.
I have been looking to revert back some time soon.
Catalina is the way forward in due course at some point with a really up to date machine in my opinion.

I guess what I am saying is that there is not much you can really do other than to revert back to a previous software edition. Can’t remember exactly what the last 32 bit system was. But as sure as eggs are eggs it will fix the slowness. I will endeavour to look into it in due course. In the meantime if any one out there has done that the information would be very much appreciated

Had a similar issue/problem with my Late 2012 iMac 27. Ran fine on High Sierra (the last 32-bit version of MacOS X), but got really slow running Mavericks (the first 64-bit version).

I fixed mine by running the system from an external USB3 SSD (Samsung T5). It now boots from cold in under two minutes. Starting something like Word or Excel, or Lightroom takes just a few seconds. Really night and day difference from running off the internal spinning disc.

I have some 32-bit apps, so am still running Mavericks because even though it’s 64-bit, it will still run 32-bit apps. Catalina won’t do this apparently.

If none of this is making any sense, you unfortunately have a bit of a learning curve ahead of you. But keep us in the loop, we may still be able to help.

Scarletpimpernel:- Likewise, not all current software for iMac is 64 bit either. Tom Tom for example just doesn’t work at all even though they say it does with Catalina.

it will work. Like you mine didn’t work so I contacted TomTom and they advised me to delete My Drive Connect and reinstall. After much messing around I am now able to update my TomTom satnav and use the My Drive Connect App just as before. It was a PIA. pain in ****.

However like other posters on this thread I really wish that I hadn’t gone the 64 bit route so soon as my slide scanner (Arcsoft software) no longer works and Arcsoft will NOT update.

Likewise I have binned Norton as it has proved equally troublesome to update - I even had their help desk login to me and sort it!!! My local Apple Genius Bar told me not to bother and they have been proved correct.

Thanks. Have deleted and reinstalled several times all to no avail

I will give it another go soon as you never know

Hi. Here is a precise of what TomTom support sent me. Hope it helps.

Dear TomTom Customer, from your email I understand that you were unable to update your TomTom device.

Sorry for the inconvenience caused.

In order to update device, you may follow instructions mentioned in the below link.

For detailed steps to install MyDrive Connect, select your operating system: Windows - macOS Windows The steps below refer to Internet Explorer. If you are using another browser the steps...

How to install maps and updates with MyDrive Connect

You can use MyDrive Connect to update, change or install new maps on your navigation device. To see the steps for updating a Wi-Fi®-enabled device using a wired connection and your computer, click...

If you have any further questions, please reply to my email and I will be happy to assist you.

Well done will give that a go.

Edit.
However, I need Tom Tom Home to update the maps for the inbuilt Satnav which is the NVA-SD8110 Live. As mine has the SD card and “I believe” My Drive is for the portable ones.

It opens and crashes every single time and I have really lost the will to keep trying. Tom Tom support for me are just pretty useless and quite a few others for what I can see running Catalina…

Hi. Aaaaaahhhhh. My device is a portable one.
For what it is worth you could make your iMac a dual boot device by loading Windows 10 on to a stand alone SSD . There are plenty of Youtube videos that can help you. I have to say that this is what I am going to get my son to do for me. He’s a bit of a whizz on a iMac. I have assumed that your mac has an Intel CPU. No doubt when macs return to Apple CPUs it will not be possible.
All this assumes that a Mac running Windows would be a much easier beast to tame and to load a working TomTom loader for you to use.

For interest I am using a 2017. 27inch iMac which I like but my gosh its been a vertical learning curve. Truth to tell its still a very steep curve - damn it!!
Anyway good luck.

It is an unfortunate truth that hard disc drives (HDDs) have a limited life in terms of the finite numbers of reads and writes they can perform. Even more unfortunate is that we don’t really know what these numbers are, until they are reached. And even more unfortunate is that, whilst not impossible, it is way beyond the skills of most of us to replace the HDD on an iMac. So, when the HDD starts to fail, you are probably looking at a replacement iMac. I speak from very recent experience. You have been warned.

I’m not suggesting this is necessarily the problem in this case, but mine was a “late 2012” model though granted it had been worked hard over its life. Do please make sure you don’t keep any important data on the iMac’s HDD. Get an external HDD. Or even better two with a backup system (Chronosync is an example).

I work in a computer repair shop for a living.

What is probably happening is the hard drive is beginning to fail. They’re a mechanical part and just wear out in the end. The early symptoms are the system crawling along, software won’t fix it.

The 2012 and newer iMacs are a right pain in the a**e to replace the drive as the screen is held on with double sided tape, is extremely fragile and expensive to replace.

I tend to replace the drives with Samsung 860 evo SSD’s which wakes the system right up.

For now, i’d buy an external drive and set up time machine. It will ask if you want to set it up when you plug it in.