Compared to stock, on a track, what would it do? Make the front end sharper on turn in? Looser at the back?

The main benefit is it will make you feel happy.

Am I to interpret that as no handling benefits at all?

Triangulated braces in my view are worth while. A brace with a brake stopper is certainly worthwhile.

I did a blind test on a mk3 where I didn’t know if a brace was fitted or removed…this was on a test day.

Didn’t know they were a waste of time, thought it would have tightened things up?

What goes for the NC doesn’t really apply to the NA/NB.

The mantra is that NA/NB MX5s don’t have struts. Strut braces worked on Escorts as these use Macpherson struts, where alignment was changed under hard cornering.

On the NA/NB, the “strut brace”, or shock tower brace (STBs), serves to additionally stiffen a floppy shell. Front subframe braces, like the rear, stop the subframes from distorting under cornering, so these are definitely worth having. There are STBs and there are STBs. The OE Mazda STB is a pretty solid bit of kit, and you can nicely load it up. The cheap braces are… Well they use a lot of bolt together light weight materials, and likely don’t do a lot.

I have an alloy one-piece RS Aizawa brace; it ties together the inner wings to the firewall. But for me the biggest benefit is the brake stopper. A brake stopper braces the brace master cylinder from movement. Pump the brake hard back and forth, and you will see the master cylinder move, as the firewall flexes. That’s lost energy from braking. Some will change the brake hoses for Goodrich hoses; essentially rubber brake hoses wrapped in a metal sheath, to stop the rubber bulging under hard braking. The result is with Goodrich hosing firmer brakes. I don’t like changing these components to non-OE; there are a lot of substandard parts out there, and failure results in loss of braking. A brake booster can have a similar effect; a firmer brake pedal, but there is no change to the braking components.


You can get stand alone brake stoppers, but many are built into the bracket of a TB; literally a bolt that can be loaded against the nose of the master cylinder.

Homebrew efforts can be made, but I’ve seen some cheap STB brackets bend under the load.

Mazda fitted thew to some cars for NHV reasons as they lower certain frequencies and stop some vibrations. If they made any handling impact they would be fitted to all the cars as standard. The main benefits are cosmetic.

Understand that you have an open top car and both longitudinal and torsional stiffness rely on just the transmission tunnel and sills, which may or may not be full of holes. A strut brace does not cure this. Race cars have the benefit of a substantial cage effectively creating the stiffness of a roof and then some.

As the dampers do not form part of the suspension alignment control in the MX-5, any benefit from these devices would be very heavily stacked toward placebo and I have never seen anyone claim a faster lap time because of one.

On the MK2’s they were 3 piece devices with the top brace being held to the main brackets with what was effectively self tapping screws into slotted holes through thin sheet metal. They were never designed to resist any substantive loads. 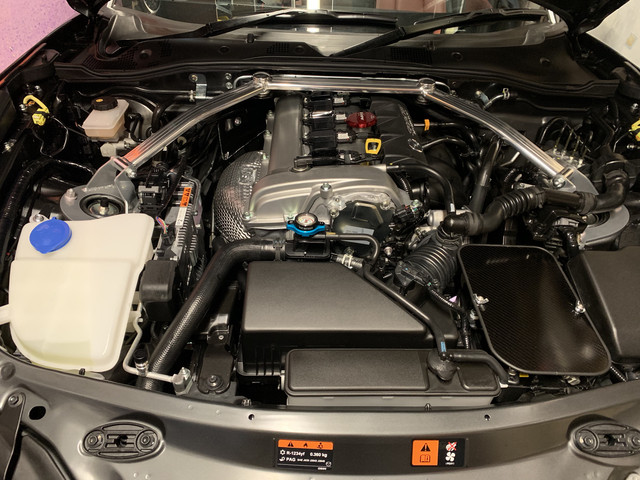 thanks for taking the time to look

Is the handling noticeably better with the new fitting?

Therefore it is not an upgrade.

Over the years, with the RS Aizawa triangulated brace, I have to remove the brace for routine servicing. Its attached to the firewall via bolts, which tie into a substantial bracket that bolts to the scuttle. Over those years, I have to go up a bolt size, M10 to M12. The brace isn’t inert. It is imposing loads on those bolts, through movement at the shock tower (Mk1). I can conclude that it is providing a benefit. As pointed elsewhere, in previous discussions, reduced NVH in itself can improve laptimes in a measureable manner, because the driver is better able to apply their concentration.

as I said…added weight and pointless!

As I said the aluminium Brace is around two once less than the Mazda one so how do you recon its adds weight,… less is not more well it was not when i was at school back in the 60s

Oh Saz, you make me laugh with your “petulant,I have to be right no matter what” approach to everything internet.

Your brace does absolutely nothing to increase torsional rigidity of the car from the firewall back which in the case of any car, but particularly the MX-5 is what is going to compromise suspension geometry the most. I would even contend that it does very little for torsional rigidity ahead of the bulkhead too. Of course it is going to show stress on the bulked because it is subjecting that to all sorts of movements from braking, bumps, potholes, heat expansion, vibrations and everything else that flaps the front end about including the loads from the brake stopper you are so fond of. Does this make the suspension geometry better while the back end is flapping around like a flag in the wind? No! Does it control the accuracy of the rubber bushed suspension arms? No! Just ask yourself, while looking at these braces, what actual substantive loads they withstand in say twist, other than reducing frequency of “rattles”?

In your first response you even make the case that  “But for me the biggest benefit is the brake stopper.” now suddenly it makes all the different to laps times in racing.

To say this “reduced NVH in itself can improve laptimes in a measureable manner, because the driver is better able to apply their concentration.” shows a catastrophic ignorance of racing. No racing driver ever, has been distracted by a bit of a buzz, the sort of minor cruising irritations are designed to reduce and is a ridiculousness desperate attempt to justify your view while at the same time trying to shut down any informed counter argument by saying it can’t be measured and if you claim to have you are illegal.

MK1 and MK2 cars will not benefit in lap times by having a tower brace fitted and having supplied tyres to just about every MX-5 racer in the UK over the last number of years, including all the champions, not a single driver has lamented the lack of one either.