Quick write up on how I fitted DRLs that may help/inspire some others.

I decided to fit daytime running lights after three people pulled out in front of me in one day on a run in the country. Years ago when on a run on the bike with a few mates, it became obvious that if one biker was ‘lights out’ and the others were ‘lights on’ then car drivers became blind to the ‘lights out’ bike and would pull out in front of him/her even though (s)he was evenly spaced with other bikes in the same convoy. I think the same is now happening with cars – and the little grey MX5 does its best to blend in to the scenery in some of the country lanes around here.

So – some research on here and elsewhere led me to the conclusion I wanted something cheap and cheerful, and there was no simple plug and play solution for the NC (as there seems to be if you don’t have fog lights – there is a kit to install fog/DRL combo, but only if you don’t have foggies as standard). Thanks everyone for your input.

The cheap kit I bought was only about £11. 4 out of 5 reviews suggest they are great, the other reviews say one or more of the diodes dies after a few months. My thinking is that at £11, I can happily swap a failed unit in a few months if necessary - these units seem to be widely available on eBay and Amazon, so hopefully will still be available if/when I need to swap one.
Link to Amazon

These come as shown, two units, E marked lenses, 6 watts per side, with bullet connectors to about three feet of cable. That is it. To be legal, the lights have to go off, or dim if you have your headlights on – this is to stop excessive lighting dazzling other drivers in the dark, so to stay legal you have to get creative with a relay. 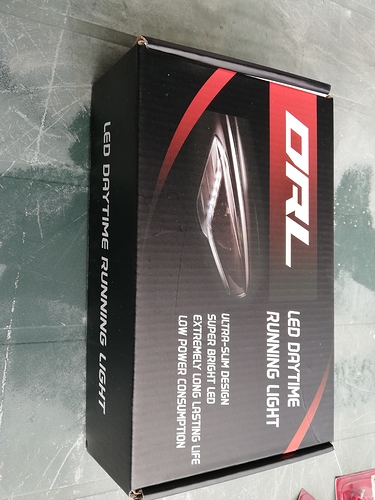 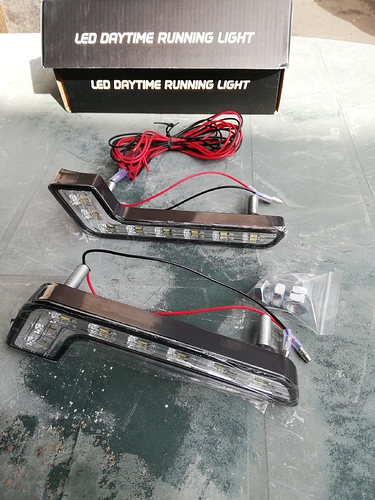 I had an old ‘change over’ relay from maplin I used, but new ones from Halfords are only about £4. This is a five pin relay that uses an input charge to throw a switch to connect a separate circuit to one of two output connectors. 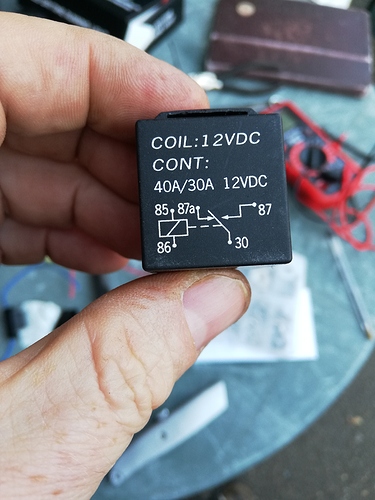 To supply the current for the DRLs, I used a ‘Breakout Fuse’ that replaced the Wipers fuse in the fuse box. Connected with the breakout wire on the left side, if the wiper fuse blows, 12v will still be available to the DRL.
Similarly, I used a ‘Breakout Fuse’ (about £4 from Halfords) to replace one of the headlight fuses so that when the headlights are on, the relay receives 12v and this then changes the circuit to take the connectivity away from the DRLs and turn them off. I again have the breakout on the left, but may swap it round so that should the lighting fuse blow, the DRLs come on – which will help me see where I am going until I fix the fuse. 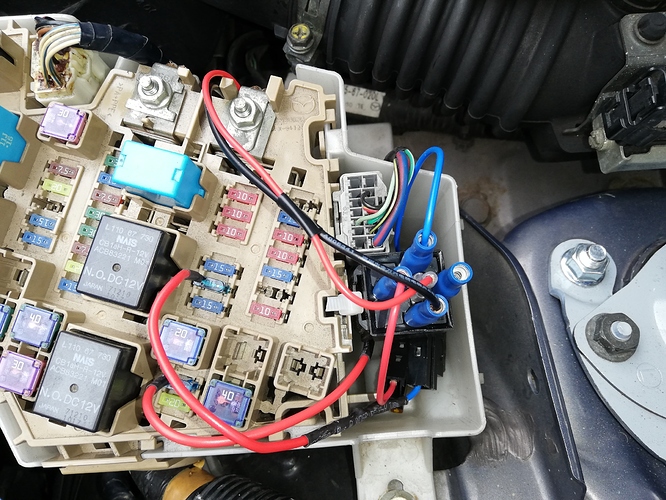 Between the Breakout fuse and the relay I have put in inline fuses – 5 amp on the DRL circuit and 1 amp on the the coil activation circuit.

I have connected the earth to one of the fuse box mounting bolts. This is connected to the chassis and seems to work quite well (at the second attempt – first time I simply took the nut off and trapped the connector between the fuse box and the nut, and this did not work. Second attempt I put a washer on top of the nut, then the connector then another nut. This worked perfectly). 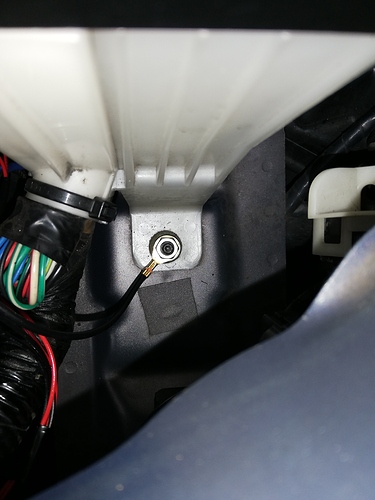 And lastly, I put an unwired connector over the other output on the relay as this will be live when the headlights are on, and so this need insulation.
Also, taped a bag with a few spare fuses inside the cover - for emergency use. 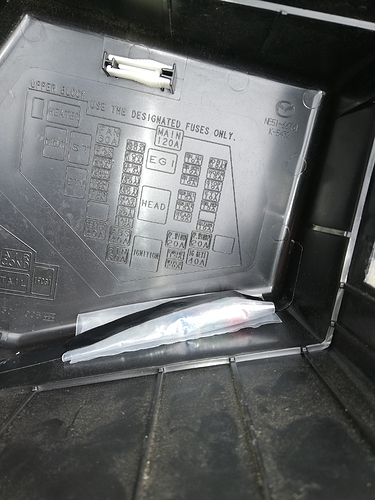 I am happy with the results, and while the placement is probably too narrow to be strictly legal (I have not measured it), it is something I can easily live as I was keen not to drill any holes or make any irreversible changes. These unit simply mount through the grill. 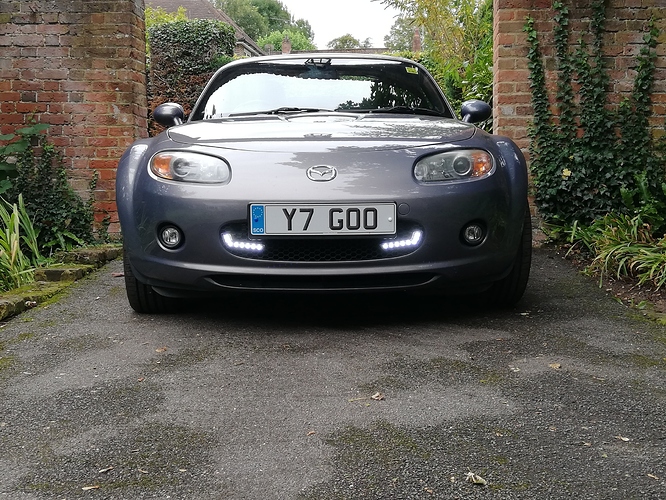 Great write-up.
Very nearly clear enough for an electrical numpty like me

As you say, slight shame that the spacing is a little narrow, not just for legality but because our brains instantly interpret something narrow as being further away than something wide, which imho, is one reason why bikes get pulled out on so much.

It’s not just width but approach angle that makes your brain perceive distance. That’s why advanced motorbike riding lessons teach you to stay as far out as practical from a drivers perspective. I know what I mean anyway

. But yes, effectively a narrow object is perceived as further away and slower moving in the human brain.

I was looking at these to add DRL to my NC1 but initially wanted to mount then in the splitter and thought they would be too tall to fit. But interested to see that you mounted them through the grille. Also found an all in one controller on the net which makes the wiring easier. Any other tips, did you remove the front bumper to fit them?

Do you have a link to the all in one controller please?

The input (the end with the fuse is the input). The red and black wires are directly connected to the car battery. Product features: The product is mini, light and small. Suitable for all models. With dimming delay function!

Many thanks - think this will be my first change!

I wouldn’t bother with one of those, they are rubbish cheap Chinese stuff.

I didn’t remove grill or floor, had enough room to get my hand through the splitter and attach a washer and nut. I didn’t drill or cut any holes. Could remove everything in two minutes and leave no trace.

I thought about putting straight lights in the splitter, but thought these L shaped ones looked best.

So what do you recommend?

I would use a changeover relay as above. I tried a couple of those cheap controllers & found they were not very reliable. They didn’t dim the drl’s very much when the lights were turned on & sometimes the delay function didn’t turn them off at all.

The acronym I like is KIS. Keep It Simple. A relay is simple, electronics are not. If they are cheap you’re asking for it.
I wouldn’t personally connect to the fuse box that way I would use a new fuse and come from the battery or main live rail. But that’s not about reliability it’s about experience in the trade and standard systems of work etc. Coming from the fuses is fine it just has a few drawbacks. But that’s not something to worry about too much.

I only noticed yesterday my ND DRLs turn off when you stop in traffic and apply the parking brake. The second you pull away again they come back on. It was a grey sky and I could see them reflecting on the rear bumper of the car in front.

Completely agree with your assessment. Thought I would do the job “properly” when I fitted mine, but very quickly binned the controller and used a changeover relay.

Just out of interest which drl’s did you use and where were they fitted and do you have any pics?

Lots of talk on fitting DRLs at the moment.
I have always found front foglights to be next to useless, so I wonder if you could convert them (cheaply) to DRLs??

Mx5 parts do a kit. If you look at their website and also on u tube you will see how it works. It should not be too difficult to do this if you already have fog lights fitted particularly if you don’t want to retain the fogs as fogs.

Looks good, but at £177 thought I would try my cheapo (sub £20) option first. If I didn’t have spare time (and a lack of budget) due to covid, I may well have gone for this option.

Thanks, yes, I’m aware of that kit but imho, it doesn’t quite fit the ‘cheaply’ requirement.
Perfect if I wanted to retain the fog light function but I don’t, all I’d like to do is convert my existing fog lights to DRLs

My retro fitted DRL’s are a very similar installation to yours, using slightly different components.
My NC had it’s first MOT insp. last month since fitting them.
I disconnected the DRL’s prior to the MOT, however the MOT inspector informed me that due to the age and specification of my 07 plate NC he wasn’t actually looking to inspect them as they weren’t on his sheet for my car.

I reconnected them after the insp was completed then asked his opionion and he was quite happy with their installation and function ( mine turn off when main beam is on dipped or full, however stay on with just side lights and/or Fog lights selected on).

What bulbs are you using?
I was wondering about using LEDs as all DRLs seem to be LEDs these days.