Engine cuts off whilst driving - HELP

Also when it cuts off there is a strange ticking noise from near the steering wheel.

Does it do it: coming out of a roundabout or sharp bend , revving hard ?

What do you think it could be?

Hi Sharkbonboh, it’s a subject close to my heart, if it’s happening exiting bends / roundabouts and under hard revs but seems fine if you stop for a minute then in my experience it’s likely to be debris in the fuel tank, I have done a few of posts on here about it with quite a lot of detail but here’s a potted version, my car was stood for 11years without use then fully recommissioned, after a while it started cutting and missing at higher revs and eventually upon exiting bends and roundabouts, I tried changing cam and crank sensors but no joy, ran petrol down to empty ( it’s surprising how far is left even with the needle below empty, and with the needle on the empty mark there is about 7/8 litres of fuel left) whilst having a 5 litre emergency container in the boot and put just enough in to get home, undo the petrol filler cap to relieve the pressure, remove the 5 carpet retainers behind the seats and roll/fold back the carpet on the parcel shelf, remove the 6 screws from the large inspection cover, remove the 2 fuel pipes by pinching in the clips, remove the electrical connector by pinching in the clips, remove the 6 screws from the pump plate and lift the assembly out of the tank carefully and avoiding damage to the float assembly, have a tea or coffee break but not a cigarette

check the pick up filter for crud and clean with a nail brush and washing up liquid, remove any remaining fuel with a clean jam jar or similar (you will now appreciate having run the tank to near empty…don’t ask​:smirk:) finally dry bottom of tank with rag and remove any debris you can any way you can, leave overnight to evaporate dry overnight, next day run hand all around inside of tank as far as you can to displace any rust powder you can, hoover out any remaining debris from bottom of tank being sure to get debris out from under the baffle plate with a rag / straw brush /whathaveyoy, when sure all is as clean and dry as possible, refit components and fill with what’s left of the petrol start engine and test drive, if all is good then great, BUT for me the problem returned after about 100 miles (I only put about £25 of fuel in just in case) don’t dispare just go through it all again as I did! The second time I did it I used cable ties to raise the pick up filter by 23 mm so that I can get a couple of tankfuls of fuel used up to hopefully dislodge any remaining debris and then I will do the job again and repeat until I’m sure all is clean, at that point I shall remove the cable ties from the pick up filter and also replace the inline filter.! I’m sure you will have an addled brain reading all of that but if you decide to go ahead iwould write it down as series of actions, it’s all actually pretty straight forward and self explanatory once underway, do check first that your model doesn’t have a petrol drain plug as that would make life easier for you, have fun and good luck, any questions please ask and keep me updated.
Kind regards Dave.
Ps I’m a MK2.5 so yours may be a bit different but I would think the principal would be the same.
PPS initially I removed about a large mugful of gritty and powdery rust.

isn’t that what the filter should do ?

Thank you for that very detailed and valuable explanation. That is my worst fear - i’m hoping it isn’t that but could well be. I did try something yesterday where as we wedged some cardboard next to the battery (in it’s little box) and seems to have stopped it completely cutting out - so (fingers crossed) it may have been the battery hitting into something. Otherwise I think you may be right. I have bought a fuel filter too.

I used to have a Mazda 626 that did this turning sharp right, pretty sure it turned out to be a wire shorting out. You could check the earth strap is secure otherwise it could be another wire related to the ignition shorting?

I think that could be it - any left turns or big bumps makes the car go slugish (no power) but if I put my foot on the accelerator pedal and wait two secs it will pick uo where it left off.

Find an empty carpark and drive in circles (relatively slow speed low revs will discount some fuel starvation issues) that will allow you to test things very quickly. It could be rubbish in the tank but that would not be immediately when you turn the wheel as it takes a few seconds to get to the engine from tank. Have you checked the battery earth cable state where it bolts to the body? Also battery needs to be secure, I just reconnected my battery today after removing a seat and a previous owner has completely chewed the live terminal, had to spend a careful 5 mins bending it back into shape without breaking it.

Just re-read the big bumps comment that would definitely indicate an electrical short not rubbish in the tank!

Good idea, I will take it out tomorrow and see if I can cross that off.

I will check the battery as it’s literally just bee replaced - unfortunately so have a lot of other parts too!

I probably wasn’t to clear ref when revving hard, if the problem occurs when revving hard ON THE LEVEL as well as on sharp turns then I would think it likely to be fuel starvation caused by the debris washing over the fuel pickup, for me this didn’t happen after first driving off (which led me to believe it was heat/sensor related )as the debris had settled, as the fuel reduced the incidence of it happening during hard cornering increased, So, is it happening in a straight line under hard revs ?
I recon you have a few things to try given the other contributors ideas! Good luck.

No, the pick up filter on the bottom the pump stops debris going through the pump and on to the inline filter, it’s the “first line of defence” and in my case the mugful of debris was overwhelming it as the pickup filter lays flat at the bottom of the tank, when I first removed it it was covered in dark gungy crud and the mesh was blocked with fine powderery deposit, when clean and clear water should flood out freely after immersion.

Hmmm big bumps may also disturb the debris iny opinion (however if the reaction is instant then yes I could see it being electrical, but even a fractional delay would have me doubting it) it would seem to me that all these ideas are worth investigation starting with the easiest.

Thanks for all your contributions thus far. Took her out for a test drive today - left corners and bumps seem to make it lose any sort of driving power for 1-2 seconds and then it’s fine. Straight roads (flat) are fine. Tomorrow we are doing HT Leads, spark plugs, new maf, battery refit, ecu refit and also battery clamp. Fingers crossed

Good luck hope it works out but it does sound like fuel starvation, maybe worth checking before spending !
Ttfn
Kind regards Dave

My Dad used to say to do one thing at a time, otherwise you won’t know which of the things you did cured the problem.

So just to give you all an update! Had a look and found (hopefully) the two causes. We opened up and replaced the fuel pump and had the same issue - checked the tank and it was very clear inside with no ‘bits’ or sludge (attached) looked at the battery and saw the battery clamp had snapped ( causing a loss of power ) we also think the rough start/idle is due to a broken MAF sensor due to the ‘cleaner’. Ordered new parts and will install and keep updated.

On a side note jacked it up and replaced the fuel filter to be sure and found a rust patch on the sill - how much would this be to weld? The arches and other sill is fine. 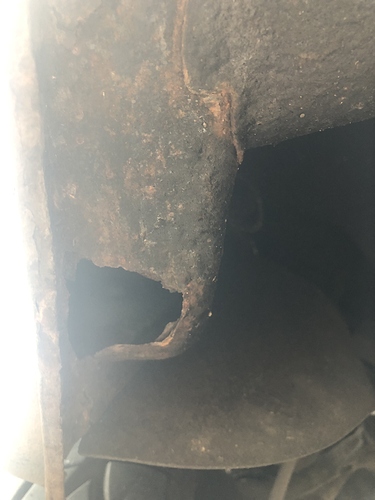 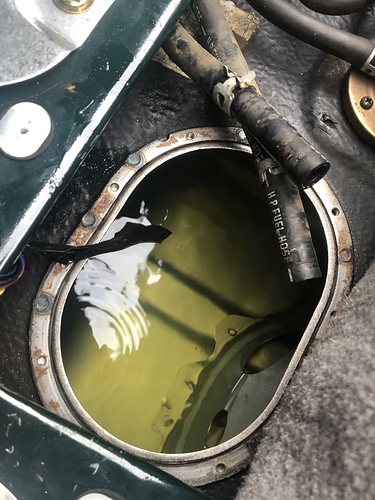 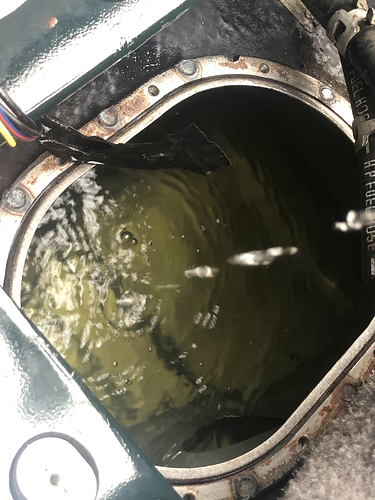 Hi, looks like i was wrong your tank looks very clean and it sounds like you have found the culprits well done.

Okay so, still in need of help.

To also clarify the fuel tank is v clean.

When driving over a bump the car will “gitter” and the security light will come on and after a few seconds it will recover itself.