Maxda Miata MX5 MK1 California (Or is it?)

Alright so, I’ve been losing brain cells to this all day and I need to find out from you guys, this is a long story so I try to make it a bit funny, this is a whole book on about only 2 days of Miata.

My name is Alex, 13-year-old car enthusiast and Iike miatas.

Yesterday, Me and my dad bid and win a “quote - MAZDA EUNOS AUTOMATIC ROADSTER Ltd California Edition” 1990, Japan Import, Sorn for 18 months, the car was left to a friend, so obviously he had no info, the owner, ‘couldn’t talk’. so we had a look, some rust here and there nearly all around, doesn’t run, no battery. apparently needs a starter motor to start.
so we came back home from the visit, talked about it and liked it, ended up winning, and i don’t know if you caught up with all the clues, but personally, I think they’re sus, the next day when we came to pick it up in a rental flatbed, the guy said he left for London, so we were alone, in a muddy garden, trying to pull a banana. as soon as we pulled it, bang, the front left wheel is seized, jack it up, bang, front sill collapses of rust, so, we’re a bit concerned, but I’m saying to myself "hey, it’s been left for 18 months with a guy who knows nothing but how to play music, they couldn’t know these problems’ so we tried to load it and obviously it was harder. first, the truck got stuck in the mud so we had to use its own winch wrapped around a tree to free the truck (smart dad), then we tried to load the banana, backwards. and it wasn’t straight so once and we had to use the winch, attach it to a (this time) weaker tree and bend the bananas wheels. so after we got it load and completely ruined this guy’s backyard. we tried our best to reverse the truck to speed thru the mud, then you can guess what happened. I had to stand outside like a lost child but luckily a maintenance truck came along and I wagged my wiggly hands, and he just drove away

, but then he obviously turned around and stopped, I told him the situation and he got us out, rest of the day was fine apart from ruining our other project trying to use it to push the banana. THE NEXT DAY CHAPTER 2 I and my dad woke up at 9 and came down to the car to take the seized wheel off, took it off fine, the problem was the brake pads have just ya know, it’s been sitting there for 18 months, so we tried everything from spanners, to hammers, to jacking up the car and putting a great hole in it, to my dad nearly breaking his head, fast forward 3 hours, my dad sneakily came back to the car after our tea break and I tagged along. magically the calliper came off! well, after jamming a screwdriver in between everything, getting it stuck, and destroying the pads, but anyways! the wheels moved so now we could move it, then I just cleaned my shed where I store the car and cleaned the car itself a bit.

LAST CHAPTER - THE MOST IMPORTANT

The actual car itself. see my dad was sus about if it was a Cali, you can always (Somehow) get a 117/300 badge and spray it yellow, but the other side of me thought them guys were too lazy to do that.
so I tried checking the VIN Number, from what I saw the number was only 11 digits which doesn’t help as i need 17 for the major sites to expose my car to me. so I was on Reddit for ages posting about my banana car and asking questions, when a guy found out, the car is a japan import, the car is 1991(instead of 1990 - actually I’m still not sure as California’s were made in 1995) so the VIN would be only 11 digits, and that VIN would be actually just the chassis Number, so I searched it, and it came out as something completely different, a ‘Quote - Mazda Eunos Roadster V Special 1990-11 Manual’ and I’m pretty sure a banana shouldn’t look like that, mine is yellow, apparently a California and its automatic. so that is very confusing to me.

I can give some info for help, I don’t know if I can post my VIN and Reg number but it’s for help and research so hopefully, I can. I need help with this car, I still don’t know what it actually is apart from taking for granted it’s a Cali, so I need your guy’s help, that would be very much appreciated.
VIN: NA6CE-135063. REG: H596 TEP PAINT CODE?- 3L(I’d of thought it would be yellow but no)

thanks for reading if you did, and to be honest, there is so much ‘special editions’ out there it’s not really special anymore, as long as I got my yellow banana and my 117/300 Cali badge I can call it my Caliata and get on with working on it, sure the owners lied a bit but at least I got the car, gotta try to start it now.

By the way, if you guys want to see it go on eBay and search mx5 California and go under ‘Sold’ it looks like a yellow worn banana. can’t miss it, avoiding sending links. incase this would help if you see the ad.

The California was a UK only model. You have a Eunos Roadster grey import. There was a Japan only yellow model, the J-Limited, introduced in 1991. The paint code was HZ. The legend is that Mazda found it difficult to paint yellow cars, so they had to paint white cars yellow.

According to the chassis plate you have read from, your car should be a Silverstone Silver car. Check the chassis number on the plate matches the stamped numbers you see behind the engine. If it matches, you have a repainted car.

Looking at the ad: 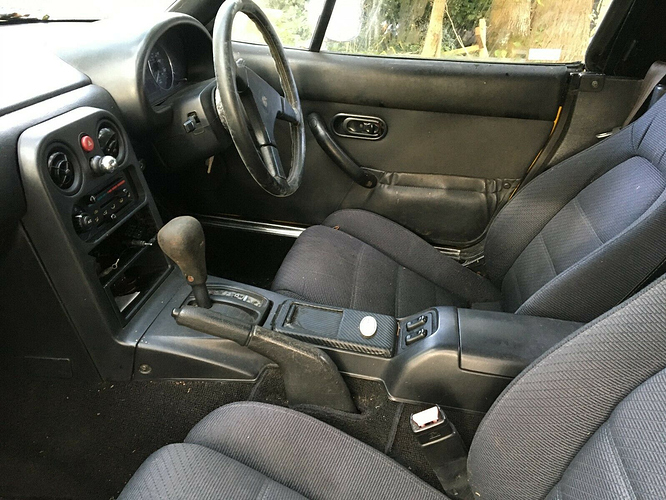 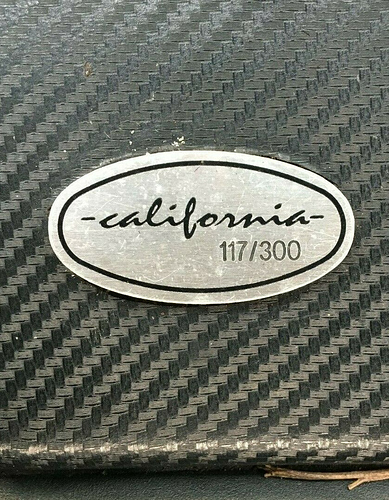 Was going to say fake badge, but its probably been taken from the California that donated parts. 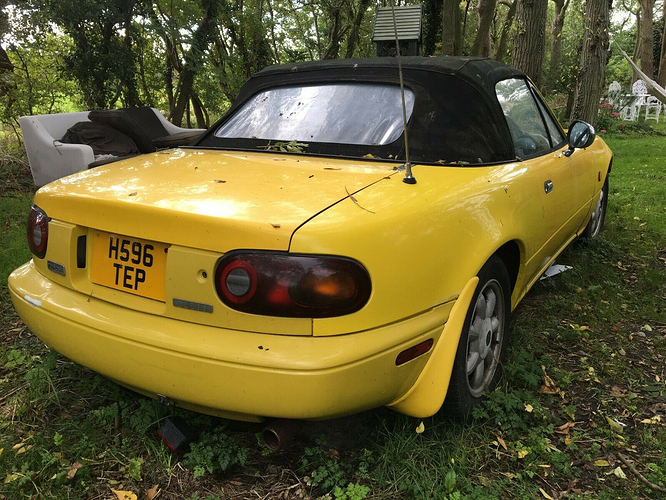 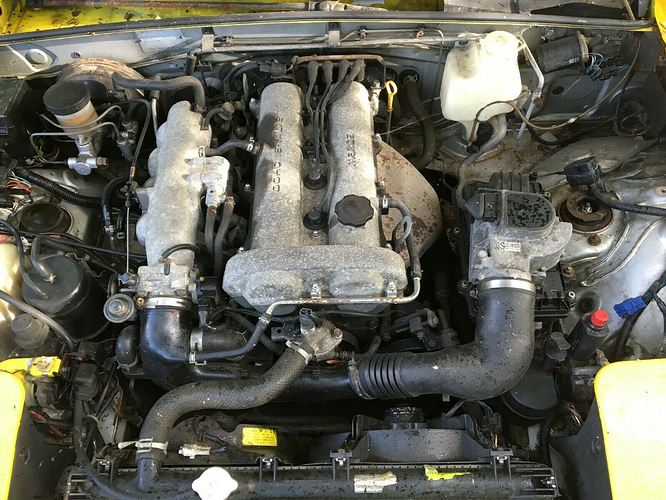 Resprayed car, it was silver originally. 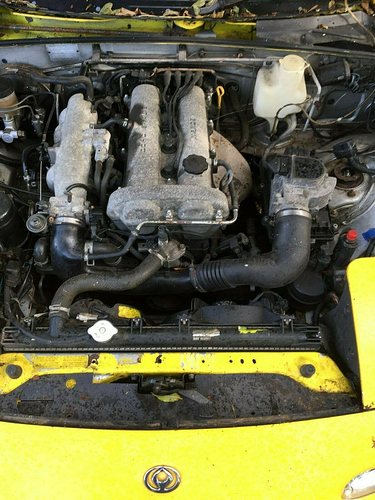 UK badge, 1.8 radiator shroud. My guess is they got hold of a California being broken, and used bits of it on this car.

In Japan, this car was a Eunos Roadster S-Package auto, silverstone.

Good porject to start on, but school work first!

thank you for that, now I have a rough idea of what my car is lol, so what should I call it then, if it isn’t California, is it just a normal Miata? I can look on google, what should look up.

and thanks for all of that, the guy’s seems pretty sus too and never called since but at least i have a car, i have a name for it too, Caliata, which sound Spanish and pain is known for sunny days and yellow is great.

also the chassis number was on the back of the engine bay where i first found it, engraved, and the card right next to it with the same number, so it is resprayed, thanks for the clarification, your good! 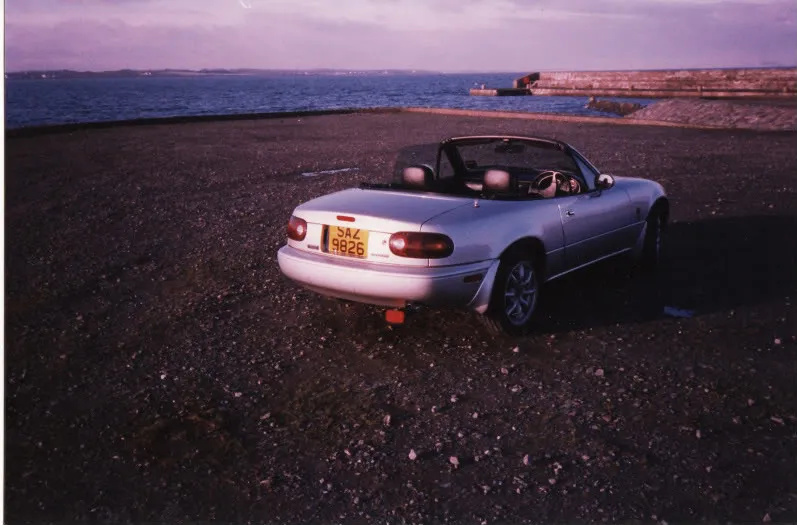 Its going to be a great project for you to learn on, and good luck with it.

This is the original Japanese brochure for the car

Its in Japanese, but use Google Translate App on a phone to translate it.

thank you, so that’s basically my car and the brochure will help, i named it Caliata but need to change it now, for now it will be Silver Banana ■■■■. 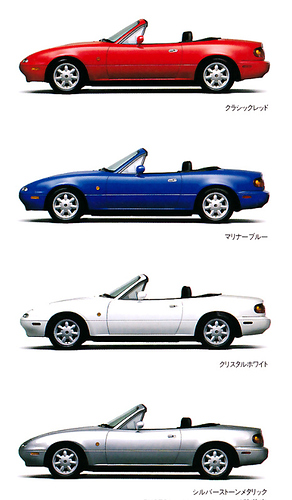 I think I could somehow strip off the California 117/300 badge, only if I can make a badge that says Silverstone, then it’s nicer and more ‘original’ I guess, that a good idea?

Well, silverstone was just the colour. The badge might be of value or someone with a California.

Really, though, its your car to personalise as you want. You liked the car because it was yellow, and even named it. Go with that.