What is the general opinion of the RF variant, I’m going to try one on saturday but still not sure as my previous 8 fives have all been either rag tops or PRHT’s leaving a clear space behind with the top down.

Well I like it or I wouldn’t have bought it. An ST would have been less suitable as daily driver kept outside.

The 3/4 vision some mither on about is no worse than an ST when up, personally I find the low angle massive A-pillars (same RF/ST) more of a blind spot hazard in daily use. With the top open I’m no more conscious of the rear being closed in than I was of the roll bar on my old spitfire, it still feels an open car.

Some find the wind noise top open a bit annoying, but against that motorway driving is more pleasant top up than in an ST, which is like camping in a Force 9 gale, especially if it’s raining. Both models generally are dark inside with the top up, apart from rarer versions with colored seats.

Visually I think the buttresses balance the rear end better, from the back the ST looks very wide-bottomed!

Also as my daughter said “Don’t buy an ST, everyone will think you’re just cheap!”

The RF is an MX5 with a sun roof…end off.

I struggled with the concept initially but I have to say it’s my favourite ND variant and for me the prettiest new car on the market today.

Do not take any of the advice you see on here, we are all biased towards the one WE chose.

Try them both then make up your OWN mind then you will be as biased as the rest of us!!!

As you already have a daily/winter car i would go for the ragtop. If it would be your only car i would (maybe) choose the RF. I also read that the RF has less headroom which could be an issue if you (just like me) measure 1,85 mr . Beside that…the RF is a very looking sexy car indeed.

As a 2 liter RF owner at no time have the 1.5ers shown any lack of ooomph on Solent group drives. On the contrary they have to change gear more and generate noisier exhausts due to the engine working harder! So possibly they’re actually having more fun?
If I was buying a weekend only, garage stored and rare-motorway use car I might well pick an ST1.5. But it would have the major disadvantage of not being orange.

I’ve have had both 1.5 and 2.0 and I am now back to 1.5, IMHO the 1.5 is great for the country roads and the 2.0 if you are doing a lot of commuting / motorway driving, but that also depends on how much you enjoy changing gear

Wow sounds similar to my history

I wasn’t going to as I have some form here…

My commute (in those days when we went to the office) was all on B roads, most of our Club events are on B and C roads, even for further afield trips Scottish A roads tend to be a lot more interesting than in other areas too.

To answer the OP, personally I’m not a fan of the RF though I do understand the appeal, like any car if it works for you that’s all that matters.

Decided to have another look at the RF, took a extended test drive and that was it, has covered under 6000 miles from new.
Hopefully picking it up next Saturday. 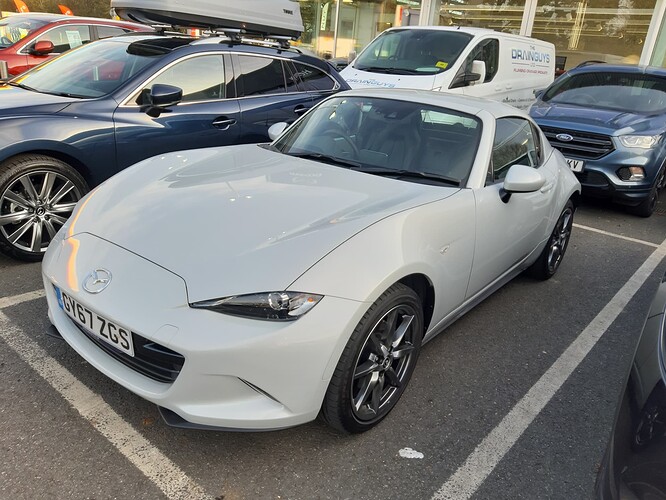 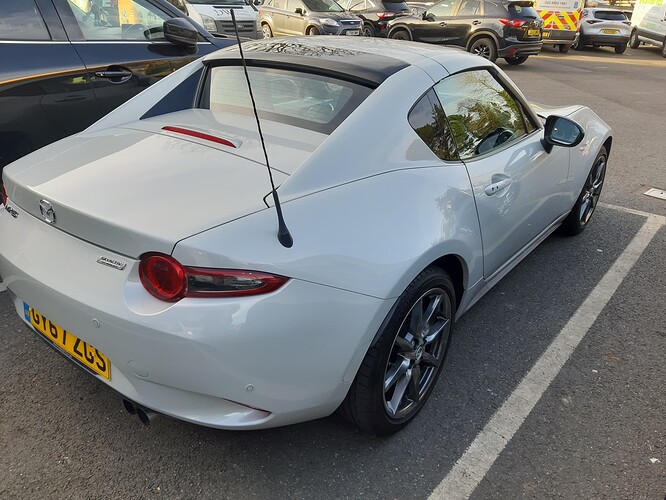 Take no notice, congratulations, enjoy yourself.

Its no worse that having the sunroof and front windows down on my Mazda 6 GT tourer.

It’s the car that brought me to MX-5. You’ll look back at it when you walk away and you’ll get excited walking up to it. Never had a car that I have made so many excuses to drive! Its hardtop gives you tons of confidence. and just enough open-air thrills when the weather allows. Glad you decided to take the plunge and sure that you’ll have a great ownership experience!

I don’t understand the noise thing!

I have only owned an RF (ND2 - 2 litre) since last April but with the windows up and the roof open, I have no trouble talking with my passenger at 70 mph.

This is also my second car but I bought both cars for driving pleasure and both leave my grinning from the sound and feeling when I accelerate hard! (My RF has the sports exhaust).

I have sat in one and loved it. I was reminded of a Triumph GT6 I owned in the 70’s ! However my friend with the rag top pointed out to me that it’s slightly heavier and in the long term another electrical item to go wrong.