Mk1 Berkley....is it worth restoring?

Hi everyone. I have just purchased a 1998 MK1 Berkley from my father in law for £500. The MOT expired last September and it hasn’t been driven since June last year. I wanted a project and liked the car when I went in it a couple of years ago. He out the battery on and it started first turn. However, there is a ticking noise coming from the engine. Here is my dilemma… The body requires new front wings, rear wheel arches and sills and probably inner sills/lower rearend panels. There is a bad oil leak from the engine and the passenger seat grey leather base has a large rip in it. Number 372/400.all the suspension arms look badly rusted too. It has a hard top and a recent mohair softtop with glass heated window.
How much will it cost for the bodywork welding, the seat repairing and engine stripping and rebuilding? I can do some things myself, but don’t do welding. I am in Halifax, West Yorkshire.
Worth repairing ? Or do I break it?

Engine ticking in your scheme of things is of little consequence. Probably. Likely simply the famed “HLA” clatter until oil gets pumped into the camshaft buckets. Usually an oil change and a good run fixes it. Forget rebuilding the engine until proven. If the leak is at the back of the engine, could well be just the usual C.A.S. seal has failed…common.

Rebuilding the coachwork, and if it turns out suspension wishbones ( which may respond to a good strip-out & repaint) are also of less consequence than the bodywork & “tub”.
That marque has a minority dedicated following. It was one of the nicest but it’s still just another old Mk1, so spending / wasting / investing/ blowing away/ burning/ or “saving a classic” ( delete as appropriate) is the question only you can decide.

Budget, from your description 3k / 4k all in and you will have at best a 3k car as…after all…a car is only “original” when it leaves the factory. It won’t hold a value candle to a low miles garage queen car with FSH etc.
I chucked 4k all in into my Mk1 last year. I’ve got at most a £2.5k car, partly as Autos are MX5 lepers to many which is fine by me. I did it for me, not what others sniff at.

Some will say it’s worth more stripped for parts ( probably) and some will say " it’s a sparkly Berkeley…at all costs save it!" Do it if at all for you, not for an investment, for that would be a big mistake.
I’m a saver at heart, not a scrapper. I had wife’s restored as well. I’d had mine 15 years you see as a daily and did some intense stuff with it I don’t want to bang on about, and decided it was my retirement treat. Every circumstance is unique to the individual.

Thanks for that advice. I wanted a project so I had a weekend car. The oil leak is at the front as the alternator has loads of oil splash on it. It has done 97k miles but the head was done a few years back and has only done 3k since. It has a twin exit stainless pipe too. I’m under no illusion that it wouldn’t be worth what I put into it as I did a '67 series 1 XKE roadster for my boss a few years back and that ended up costing £105k and I doubt he will get that back. I will join the MX5OC and hopefully be able to source some good second hand parts to cut costs down. Once I have worked out how to upload photos I will post some. Still haven’t driven it yet. No doubt I will get the bug once I have! 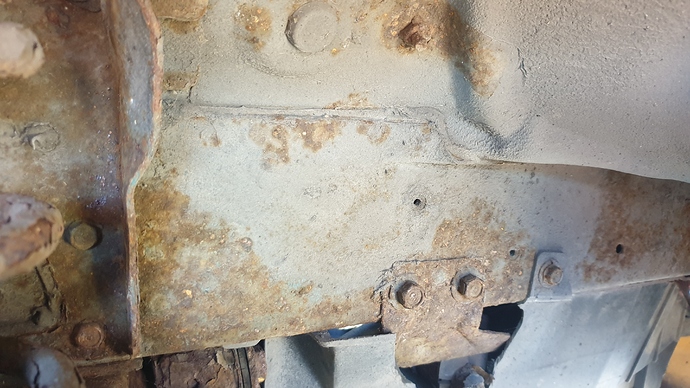 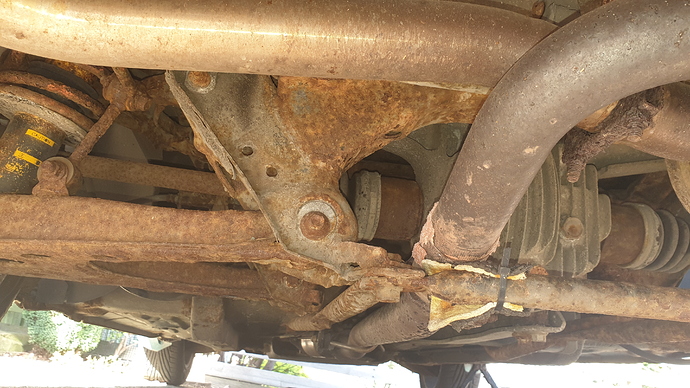 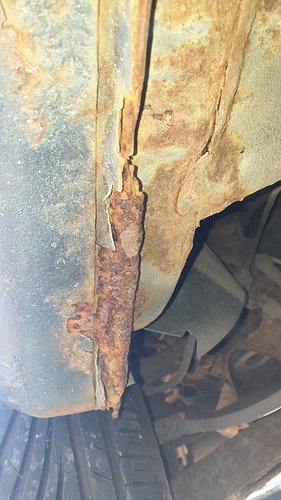 Sounds like it’s in good level headed hands then.
Front chassis rails in the MK1s often just need a good raking & proofing incidentally, being single skin and not the dread double skins of the later cars. Mine were still solid.

I think it’s pretty much covered in the above posts, in the pics, don’t look too bad but only you will know when you start poking around and start discovering more patches need doing🙄
At least the hard top and recent mohair top is more or less all the money back should you part it out.

Looking at the padding zip fastened to the brace bar, looks like the exhaust pipe has dropped/rusted.

All 3 exhaust hangers have started to split. It needs poly hangers due to weight of exhaust. Need to order some. My problem is it’s still at father in laws house so I can’t start playing with it yet.

Obviously has a non-factory twin exhaust. The car was never designed to have one, and being a late UK MK1, either it was bespoke to the car, or someone has bodged an exhaust intended for a shorter cat fitted to earlier cars. Its possible no amount of fiddling with hangers will really improve the fit.

A slight note of caution, on the “tappets”. Sometimes the hydraulic tappets won’t rise because of lack of oil pressure. With the Mk1 1.8, if the car has been left standing for a while, the oil pump strainer may block, starving the engine of oil. So use a flushing oil. Some use ATF as a flushing oil; its thin and has a high detergent content.

Thanks for that. I will probably get a proper one that fits if anyone has a recommendation for one. I presume you meant catalyst length.

I have been to have a more detailed look at the car today. Took both offside wheels off and took a wire brush on my angle grinder to the chassis legs and inner arches. They all seemed sound and it is only surface rust. Same with the ARB and suspension arms. It definitely needs new sills and rear arches and a f/n/s wing. Fitted new exhaust hangers and it still catches. Took it for a spin to remove the surface rust from the discs and loved it.
My plans are to take it home and strip the front suspension, cleaned and POR15 the rusty areas. The bushes look knackered, so will need replacing.

What are the best replacement bushes? Can’t afford £500 for Superpro.

The steering wheel is a horrible aftermarket one. What did the original have and did it have an air bag?

The gear knob is also terrible. Again! What did it have?

I have joined the club now and wondered where is the best place to look for spares and repair panels. Do members get any discount anywhere? 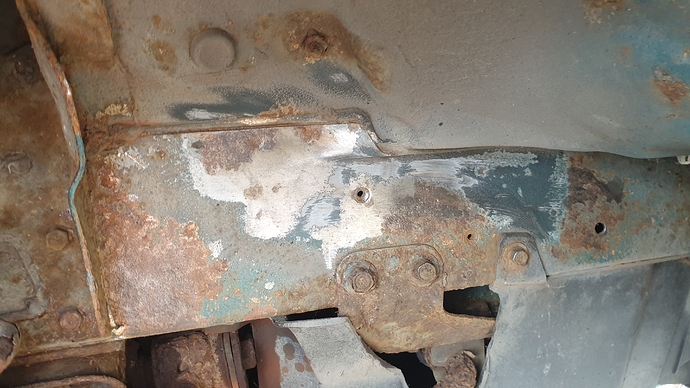 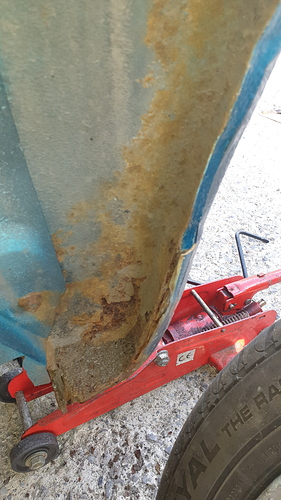 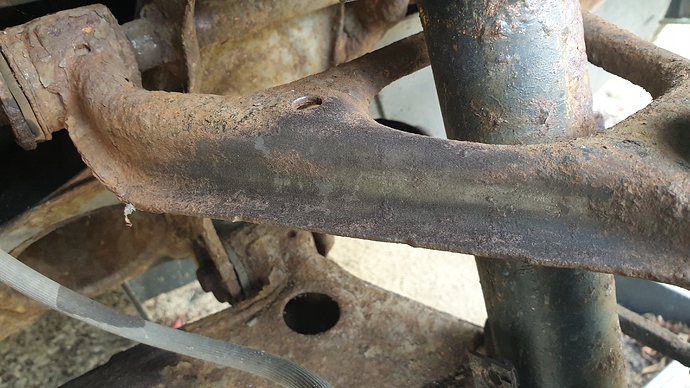 I wish my v special looked as good as that before i started on it,

It has passed the MOT with advisories for corrosion. Starting on Monday i will be stripping the suspension to de-rust and paint. Whilst it’s in bits I was considering a few options.

I dont want it to be so hard a ride or so low it catches every speed bump.

Can anyone give advice on which is best way to go.

Try someone else’s before you alter the suspension bushing etc so that you get an idea of what you would like. Your local meet could probably help you with that.essentially you need to decide whether you want it to be reasonably comfortable on country lanes, or set up for heroic track days. It was after all designed primarily as a sports car for the road.

TBH Pete, OEM bushes are the nails…Hiroshima got it right back then.
From what I’ve read over many years, mixed opinions on plastic bushes from an increase in NVH to squeaks & groans. Unless, no compromise is essential for track cars etc, sometimes with rose-jointed drop links etc. Over kill for the road perhaps.