My 2007 Mk3 started playing silly burgers today.
The remote control didnt unlock the drivers door.
I managed to go in through the passenger door, which did unlock using the keyfob, and open the drivers door from the inside.
Later, using the key manually in the lock did eventually work BUT not reliably so.

Any, polite, initial thoughts please?
I am wondering if it could be the known actuator problem (our passenger one was replaced over 4 years ago) or is likely to be the battery in the fob failing.

It wont be the fob otherwise it wouldn’t have opened the other door…Was your door in direct sunlight mine doesn’t work if sun on it but ok when cooled down.

This is how mine eventually failed, intermittent when in the sun, driver’s door.

You was probably unlucky the passenger side failed first OP, now it seems the driver side. The driver’s side seem to fail first.

Hmm, if the indicators flashed when the fob button is pressed then the fob battery and rf parts in fob and car are probably OK.

Connections can be affected by the dreaded scuttle leaks because the “keyless control module” lives in that area.

If there is no evidence of scuttle leaks then most likely that remaining original actuator has a problem. A clean up of mechanicals might help, but chances are a replacement is needed.

Slightly off topic but possibly relevant.
An hour ago I solved a different lock problem on my NC, where a new battery did not cure reluctant lock/unlock/boot, always requiring a long firm press on a button - a pain when miles away from home.
But a clue lay in the fact the more I used the fob (after six months inactivity) the better it worked.
I used a cotton bud wetted with some Servisol Super 10 to clean the seemingly clean finger contacts to the battery inside the fob, reassembled the fob, and suddenly instant enthusiastic operation.
The fingers were tarnished! Invisible tarnish, but enough there after fourteen years to slow it all down with the symptom of a flat fob battery.

Thanks folks. Looks like it’ll be the actuator.
I’ll keep an eye on it.
The keyfob is in a soft rubber case - but I’ll check it.

Looks like I need to do some investigating when time allows… Electric Window Regulator, MX5 Mk3 3.5 3.75

That’s a window regulator in that link.

You need one of these below.
Take note it’s a left hand actuator I’ve linked to, yes they are handed so get the correct one, not interchangeable. 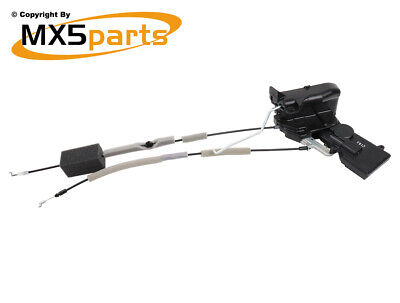 This is from our favourite parts supplier on eBay, they don’t seem to show a RH one nor on their website.
You can ring to enquire, Mazda dealers usually have these in stock but in recent times will it be hard to track one down?

Tried again last night and this morning. Worked intermittenlty and always fine manually.
Looks like I need to investigate…
The scuttle does NOT leak - I solved that problem and keep an eye on it BUT a good call RichardFX re the water leaks onto the electronic bits.

If you strip the door card off all you’ll see is the connecting cable/rods to the interior pull handle. Stripping out the interior plastic cover panel reveals the rods connecting to the door lock and actuator.
I’ve had an actuator apart looking for a fault, drawn a blank nothing showing. It’s within the actual electronic (think I’m correct in saying diodes) if you’re an electronic wiz then maybe it can be fixed.
A replacement SH unit is the path I took. Sadly they are in short supply in our favourite auction site. Contact a breaker but it’s a chance to take on a SH part, the one I obtained worked great for a further 3 years before I sold the car.

The right hand/drivers one is £125 at MX5 parts BUT not in stock!
My local Mazda main dealer can get the part, 2-5 days delivery and it’s in stock.
When asked they offered 10% discount - so it would be £155.22. He said MX5 Parts price is below their cost price.
Fitting would be c90 mins - so £171 to fit!
Think, as it is an intermittent fault and the door lock works with the key then I’ll say rude words to it and see what happens. May well try and fit it myself when the time comes as the info on here is very useful and clear …

There are 2nd hand ones on eBay for c£80 BUT I am not too sure if they are a risk worth taking.
What do you wise folk think (please) about such a part 2nd hand?

My SH actuator was a no brainer at £25 delivered but some are asking more towards or more than 50% the cost of new. In that case it would be buy new for me.

My drivers side failed a few years ago. I fitted a senond hand unit.
Its not an overly difficult job to replace other than a security plate.
Theres a steel plate covering the key lock and its a pig to refit.
It took about 30 minutes and 4 attempts to fit that plate.

Someone on the forum once stripped the actuator and figured out a fix.

I stripped the actuator and put pics on basically asking if a fix was possible. I think the term is “diodes” were spotted inside the actuator that looked a little off colour, maybe fried.
Beyond my capabilities for replacement (of the diodes) the unit has now been disposed of, I think the pics of it have too.

Thanks for the various replies.
It seems to work once to lock or unlock.
After that then it’s just pot luck if it works or not.
Think I’ll put it on the non-urgent list of things to do as it is not a major problem and look out for the parts.
eBay is about £90 inc delivery.
Incidentally, one of the websites that trawls the 2nd hand parts/breakers sites gives prices of £100-£139 inc delivery!

I did a bit of digging s few years ago and im pretty sure that the actuator is the same one used in other mazdas.
Just dont recall which model.

I got fed up with FOBs, actuators, whatever on my 2014 Sport Tech Recaro, I use the
same system I use on the '94 Eunos S Special, a KEY, works every time.
My wife’s 2014 Fabia Monte Carlo has faultless key fobs.
I’ve just bought a Suzuki Swift Sport which has a keyless entry & start button,
it takes a bit of time to get used to not using a key to start the little beast…
The Swift is primarily for winter horrid weather conditions, made in Hungary with
plenty of underbody protection, hopefully this will allow the MX5’s some respite from
salted roads.
Enjoy the Sunshine
Keith