New Forum - my observations so far

All my thanks, received and given on the old forum over the last X years are gone? No problem with that at all just would like to have that confirmed, particularly as the former most thanked poster. If there was a choice and I suggest at this stage there probably wasn’t, I would have voted for a reset anyway - call it a declaration. My only issue with thanks is judging other posters on the basis of, given and received but in truth we know who we are

We were informed that certain profile details would be lost and I saved those for input to the new system but I was hoping and expecting that the private messages, all 1000 of them, would be ported across. This does not seem to have happened which is a combination of relief and
‘oh heck, where did my useful contact information disappear without a chance of saving’.

No real worries either way as considerable responsibility released and certainly not my fault but please put me out of my misery.

No PM’s and no thanks either Rob, a clean break is often best

I know I’m a bit of a Luddite but this new site is IMO absolutely awful, the forum is (was) the best bit for me and now I don’t like it at all. My membership is up for renewal shortly and I’m not sure if I’ll bother again. I only ever use my iPad for viewing and posting. It was a fairly conventional layout for me but now I’m on a slightly bigger mobile phone layout, hate it! My avatar is gone, fair enough and from what I hear, so are all my PM’s

oh well, I enjoyed it while it lasted.

Barrie,
Please don’t leave us…!
Don’t let a bloomin website defeat you - what would Akura Mazda think of that?
If an eejit like me can put up a new picture and avatar, I’m sure a bright bloke like you can…
One thing I do miss on the new site is people’s location - it can be very useful.
Also any way of seeing who is browsing a particular topic?

Its taking some getting use to Barrie I agree. Can no longer use my iPad as the forum doesn’t support ios9. However I can view the post headings and scroll through but then must use my mobile to view or comment - not ideal. Avatar is easy to do if you follow the instructions in FAQ.

The forum has always been so useful for help and advise. So often new users had to be asked which Mk of car they had and where were they. Having location in the profile and car details in the signature was such a useful facility. Is there any way this can be incorporated in the new ‘improved’ forum?

Second question. Is it possible to change the background colour from retina burning brilliant white?

Click on your avatar, then your user name, choose preferences then interface. 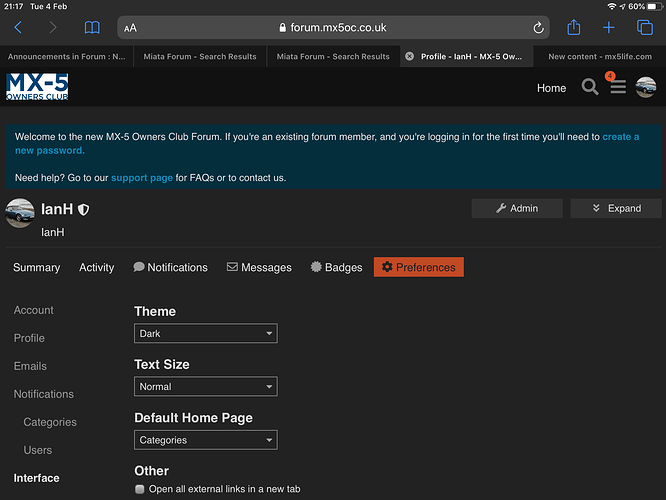 Would be picky to say I preferred the muted blue of the old forum but the black background is so much better than white. Thanks Ian.

Click on my avatar and you should get some profile information, people should be able to use this to share details of car, location etc…

That’s good. How can I add car details and location to my own profile? I have looked in the help section but can’t find anything other than how to add an avatar.

Under preferences and profile again. I’m not 100% sure of the logic of what displays when as I don’t always get my car information depending on view/device, could be a caching thing.

There seems to be a broken image link bottom left of a post for those who have filled in their profile details. If I ask to see the image using View Image in FF on PC, the Forum says " Oops! That page doesn’t exist or is private" and puts up a list of topics, even to me on my own post.

@RichardFX, yes I can reproduce that, flagged to the technical bods.

Sorry but not a fan of this at all. Looks like a child designed it and not particularly intuitive.

Sadly, I’m in the same possition as a couple of comments above, in that I can no longer use my iPad. This means I have to use my laptop, which I only tend to turn on about once a week. Due to this my input will drop dramatically ( hurray I hear you shout ).
Shame rearly, as have enjoyed this forum and it’s happy banter for years, but that’s progress I guess.
D

Only used it on my works computer so far but found it far easier to post pics which was my main problem with the old one.
So far looks good to me.

There’s another oddity; it reminds me of “Military Intelligence” or Catch-22 or when I was learning Unix, the forum sends me little snippets saying I have achieved something - as quoted below. But I lack sufficient ability to even find the “@discobot start advanced tutorial” to be able to learn more. Thus I will never achieve greatness…

" Now that you’ve been promoted, it’s time to learn about some advanced features!

Reply to this message with @discobot start advanced tutorial to find out more about what you can do.

We invite you to keep getting involved – we enjoy having you around."

Hi! To find out what I can do, say @discobot display help.

Sorry speech to "say @discobot display help" does nowt with a PC.