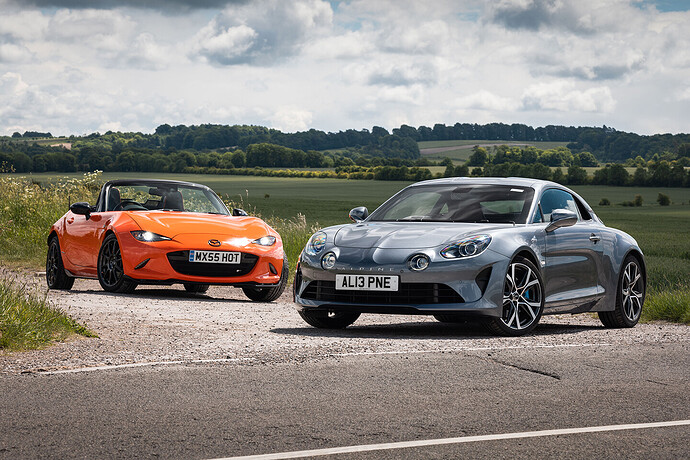 Small, mighty and marvellous come together

That’s an interesting comparison. I have always fancied an Alpine but with no convertible option and insufficient funds available I’m more than satisfied with my ND2 RF.

Should I start doing the lottery again? No I don’t think so. It’s always good to know that the grass is greener on your own side of the fence.

Alpine looks the better of the 2 on a few levels.
However, 2 BBRs for the price of the Alpine?
Surely the guesstimate of 6 seconds for the BBR is a bit high?
ND for me all the way…with 30k to spare on some Classic for the weekends.
Brooklands Capri or summat.

Is someone going to mention that the nd gearbox is made out of cheese?
Personally I think they had a bit of lack of content and had to figure something out (or making someone a favour). One is a stock car with a manufacturers warrantee while the other one as a modified one…

I’ve seen reports on Miata.net of a few gearbox issues, there doesn’t seem to be the same problem with European cars from what I have seen, do you have examples of European cars breaking gearboxes?

It seems that the issues with early tuned ND gearboxes has been sorted on later revisions.

I looked at the A110 when they were released, but im not a fan of a turbo auto in this class of car and I felt it was a poor mans 4C. Plus I vowed never to buy another French car as Japanese build quality is night and day by comparison.

I prefer this version of the A110 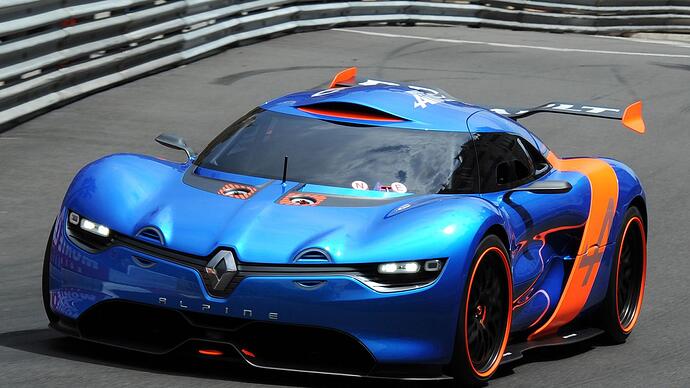 There have been a number of failures in the UK, the USA does seem to suffer more but I suspect thats all down to there being more cars and more of which are trackday and autocross driven. Mine runs the BBR Turbo and i had Mazda change it from a v1 to a v5 which i run on 75w140, so far so good but never say never.

The newer cars were tuned to deliver torque differently to avoid the gearbox destroying itself, rather than the gearbox being ‘sorted’, ND2 failures still happen though and there is even a report of a 2020 gearbox having failed.

So did yours fail? or did you get it changed incase it did? The only one I remember hearing about was Roddisons, not saying they don’t fail just that I haven’t seen many reported in the UK.

The newer cars were tuned to deliver torque differently to avoid the gearbox destroying itself,

Up to 3000rpm the torque curve is the same, the nd2 has more torque for the rest of the rev range.

No, i got it replaced because I knew I was turbo’ing the car. I know of atleast 3 cases of failures within the UK.

Mazda will be around a lot longer as there will be more spares, tougher and easier to fix and the Alpine will be a garage Queen.

How do you find the turbo? And is the gearbox holding up to the extra power and torque? Interesting that there have been a few failures in the UK, I was kind of hoping the reason there were problems in the states was because of their lack of manuals, there seems to be an awful lot of questions on Miata.net about basic gear changing technique that I have never heard on any UK car forums.

The car needed an uprated clutch and there were also some initial tuning issues, I would say there was a lot to be desired unfortunately when it came to the installation and having to deal with BBR. The car runs good now but the cost of the turbo plus the uprated clutch, its installation and a number of trips up and down the country to have issues resolved tarnished the experience, I’m not alone in this experience with BBR but when it comes to tuning MX-5s (certainly the MK4s) there isn’t any alternative. I think if people knew the potential of needing an uprated clutch and the cost involved, it would put a lot of people off as the complete cost quickly becomes rather eye watering, I have advised others who have asked to stick with the 200 kit.

Thanks for that, I have been looking at the BBR website lately trying to weigh up the options

Every car has a weak point. The ND2 gearbox seems to be ok, anyway.

This article sums up exactly why I got an ND2 2.0.

“A caterham with car play”

The caterham’s 3 inch wide footwell, spin the wheels in fourth, button steering wheel stones in the face nature is a long way removed from an MX5. I sold my Caterham but kept my mx5 as, like a caterham you can Chuck a Mx5 into a corner without hoping the electronics overcome physics.

The main reason not to have a caterham though is it’s a right palava getting into a caterham. Then just as you’ve finished buckling in you see the steering wheel tantalisingly close but just out of reach on the bonnet so you get out to get it, then as you’ve buckled up again you realise your wallet is on the boot (as you’d do yourself an injury if you got in a caterham with your wallet in your pocket) but no matter you can’t reach that either without getting out. And you can’t lock it but people can walk off with your doors. I drove mine down the m6 early one morning from Carlisle to curborough for a spot of sprinting and had to stop to put my nomex and helmet on - so cold.

Exactly. Put me off. They’re no doubt a far superior experience but as a usable toy with scope to retain comfort and long distances, the Caterham is just daft.